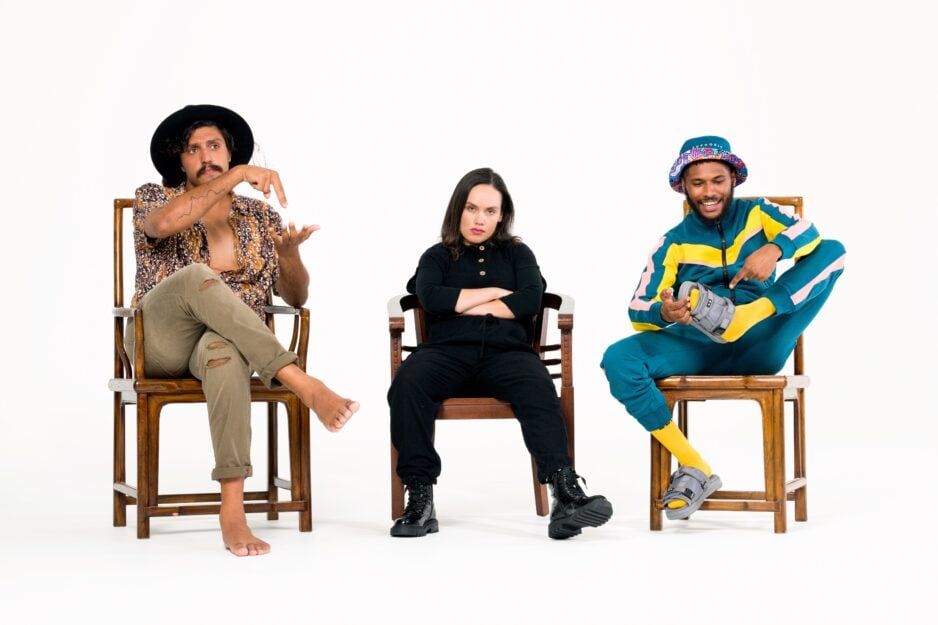 Home | Blog | Back to the land of shapeshifters

Back to the land of shapeshifters

Right about now I would be serving my last few days in quarantine before bumping into the theatre for a run of ‘plenty serious TALK TALK’ (psTT) as part of the 2021 Brisbane Festival lineup. Instead I am vying for decent real estate on my own bed in the dormant suburbs of Sydney, with a cat that isn’t even mine, writing about not being a part of the action.

To rub salt into the wound, the head of BlakDance, Merindah Donnelly, texted to inform me that the Indigenous contingent were officially welcomed by the local elders the day before and that she was sad I couldn’t make it. She was sad!?!

Well, I wasn’t exactly devastated, because quite frankly if I wanted to make it happen I could’ve camped out in Brissie before we all got locked down, or bit my tongue, dug deep and paid three thousand dollars to stay in dubious hotel accommodation not of my own choosing, eating allotted rations whilst transforming my slightly oversized cubicle into a training circuit to kill time.

Mind you I did momentarily contemplate this course of action until I realised, as a vegan, I would inevitably be supplementing my dietary needs with copious packets of Maggi two-minute noodles. Wait- do they let you keep the kettle in your room or do you relinquish those meagre white goods as well? So no, I wasn’t going to be initiated into the quarantine club. I am staying put, south of the border.

I did manage to finagle a video of a rehearsal run of Thomas E. S. Kelly’s ‘Weredingo’ which will be premiering at the new Metro Arts building located in Brissie’s West End though. I have to be honest, I did feel a momentary pang of jealousy, one of many that would ensue in small waves, as I hunched over my lap top lapping up all that kinesthetic goodness.

Actually I wanted to present ‘psTT’ at Metro Arts because it is renowned as a site for contemporary practice. It felt like my show would fit nicely into the lineup there. Also as a blackfella it would feel like a kind of rite of passage. Of Metro Arts, Wesley Enoch stated in the Brisbane Times,

“My career started at Metro. My first full-time job, my first professional directing job, the first play I ever wrote, the first company I ever ran.”

Instead I was venturing into the big time so to speak as ‘psTT’ was going to be presented at the Roundhouse theatre of La Boite. Have you seen the audience capacity of that theatre? It’s relatively gargantuan. I remember performing in Bay 20 at Carriageworks, where the show went from the intimate vibe of a 3am confessional after a hard night on the turps in the Lennox at Parramatta Riverside Theatres, to what felt like a stadium show where I was corralling the troops before they set off for war – or their bunkers, or whatever it is troops do.

Back to the land of shapeshifters in ‘Weredingo’.

Thomas E. S. Kelly’s new work is located in a support group setting where the ‘affliction’ to overcome, or merely cope with, is the ability to shift from human into animal form. It is a premise that has been briefly explored in the ABC network TV show ‘Cleverman’. Of course shapeshifting is an intrinsic element of The Dreaming, the underpinning Aboriginal ontology which encompasses the rules, laws and knowledge of Aboriginal being and existence. In this respect the humorous pretext of the show is imbued with a much weightier objective, to cement the visibility of indigenous ways of knowing, doing and being in and with the world, within the psyche of Australia’s general populace.

If you removed the Indigenous context, the show operates as an indictment of the oft times seemingly innocuous behavioural patterns associated with, toward, to ward off and against difference. In this respect ‘Weredingo’ is reflective of the gender zeitgeist and the right to self-represent, to self-determination, to literally come out from the shadows, from the closet, from nowhere- from behind and into the light.

I always get excited when I hear the sound of feet punctuating the floor, the body moving in and out of a crouched position in readiness, the eyes that meet your gaze with the intensity of prey just before the kill and busy hands that sign old time yarns of what was and what will be. As a dance theatre maker it is Thomas E. S. Kelly’s extended sequences of sharp fractured movement which is his strength and that is seeing him gain a steady local Brisbane audience following. Like fast food, his dynamic choreographic language, which sits best on his lanky frame drawing your eye toward his interpretation of the choreography, is what makes you want more.

In her sinewy shift, dancer Taree Sansbury made my innards undulate and my skin crawl in empathy. Throughout the duration of her dark representation of transformation

I found myself performing in micro shifts of my own in tandem with her. In contrast Benjin Maza played light relief to a consummate tee as a quirky character named Virgil, replete in movement comprised of signing in a language expressed as small stutters in replicate. Grayson Millwood brings his wealth of experience illustrated in his depiction of the affable yet simultaneously patronising support group leader. Millwood delivered with jaunty restraint in unlikely equal measure while Kelly rounds out the cast as the unofficial MC.

As I previously mentioned I saw a rehearsal so although the animation, which was projected on three independent screens, was washed out by the house lights I could still glean the impressive production values which made the screens appear as a solid wall through well-coordinated visuals complimenting the narrative. Sam Pankhurst’s sound score fleshed out the scenes particularly lending an air of dark foreboding to Sansbury’s solo.

I just hope ‘Weredingo’ gets a season in Sydney as this is where it was seeded, at PACT theatre in Erskineville. I did miss some elements of the former iterations which lent a little more depth behind each individual character. A mockumentary featured in a former version, which exploited a fluidity between the performative site of the theatre and the everyday of the streets, was missed. As the show enjoys its run perhaps Kelly may revisit some of the earlier elements.

If you dress up, as the marketing advice suggests, ‘Weredingo’ is the perfect event for a slightly off kilter family night out. Also for the occasional odd bod who likes to fly solo in feathers and/or fur.