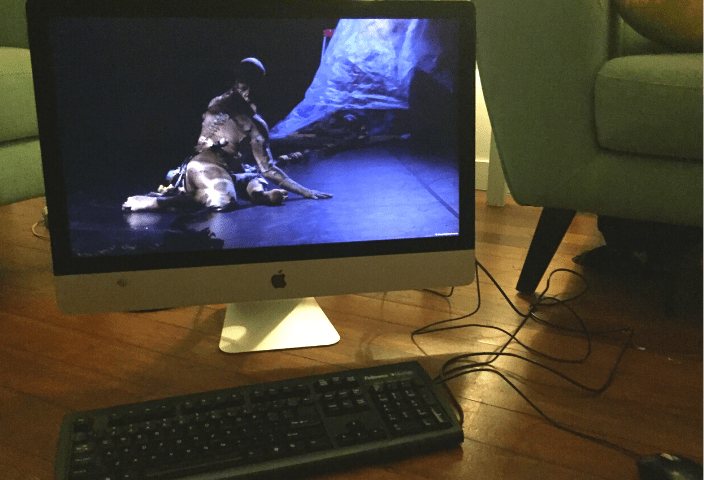 Home | Blog | Under the covers with Dean Walsh’s Infinite Item

Under the covers with Dean Walsh’s Infinite Item

I must confess, for a blogger about all things dance I have shut myself off from it, only tentatively resuming my engagement as I’ve been able to participate in real time. So, it was ironic that the first live dance work I’ve seen was in fact beamed in high definition right into my bedroom from Critical Path, by the shores of Rushcutters Bay.

So, with the a deftly placed folded envelope over the camera for good measure, I snuggled under the covers for Dean Walsh’s epic Infinite Item.

The theme, the vulnerable state of our oceans, and his treatment of it, made me re-evaluate my indignant stance toward recorded ‘piped’ action. Upon tuning in I was welcomed with a standby notice. I felt like I was at a drive in and called two friends to share in the anticipation.

The finishing touches of the set were being constructed by the real time audience members in attendance.

Cut to a still of the program notes. (Still kicking myself I didn’t take a screenshot or something.) The switching of the feed supplied a clear indication of the production values involved with an equally impressive three camera set up to follow. It was evident the production team, led by Martin Fox, knew the work because the experience was immersive. A rare feat for a two dimensional format.

I have experienced an earlier iteration of this ‘work-in-progress’ at PACT theatre as part of a double bill with Cloé Fournier’s Humanoid, so I had mixed feelings going in. Both works at PACT demanded a high level of engagement and I remember coming out of the theatre exhausted. It was obvious that both works demanded their own space and it was equally unfortunate that funding parameters, and or programming, pushed them onto the one bill.

I immediately remembered Dean’s entrance as the amorphous cephalopod unfolding and unravelling across the floor, his body able to emulate the no-bones perambulation with exquisite ease. His initial actions were almost imperceptible, heard as a rustle, a soft rumbling from deep within the manufactured landscape. We became aware of his location through the subtle displacement of the set.

The set was something else. A world within our world was constructed from successive collective collections of human detritus, in discarded plastic waste, from the shores and the deep waters of Sydney’s beautiful beaches.

Dean’s physicality morphed as the show progressed until he became bipedal. The set expanded with each physical transformation, replicated and emphasised in the increasing busy-ness of Dean’s body. He then became an embodied agent of destruction as he accumulated yet more and more rubbish, moving as a rapacious vortex – the northern Pacific gyre. Later Dean would explain that there were twenty-nine modalities associated with his costuming. This was easily believed.

I could go on with my description of the work, to acknowledge Andrew Batt-Rawden’s equally immersive sound score and the visual design, utilising the discarded rubbish to create intricate costuming. My eye kept returning to the backbone of Dean’s first skin, crafted by Kate Shanahan, from two rows of the small plastic fish used as soy sauce containers thrown in, to season sushi rolls.

Like I said, I could go on in this descriptive vein, but I want to tell you what else happened. During the show occasionally I would text about a development from the last show and I would receive texts in return (particularly in admiration of the clever use of polystyrene to create a melting tundra doubling as a projection surface). But it was the next day that a deep (and heated, or should I say invested) discussion about the work ensued.

Was it a show or a showing? How long should it be? How much, if any consideration should be given to the audience? After which a deep discussion about the role of art and the artist, either forcing the audience to accept change or mediating with them for them to want to initiate change from within. A further conversation developed over whether (or not) the audience has a role in changes within the art form itself.

Of course, one measurement of art’s value is in its ability to linger in the imagination and to spark or reignite iterations of itself in memory, long after its tangible form has finished.

I have been reading about Min Tanaka and Body Weather recently and while I don’t want to put Dean in a box, I mean who could, right? I think this work fits those criteria perfectly. Through each incarnation of Infinite Item Dean is mediating his art with everyday life. Through his artistic choices Dean becomes a part of the fabric of his environment, eschewing overly long passages of gynmastic ability, that aspect of virtuosity so easily confused with good dance, to illuminate a bigger and somewhat more crucial picture than his ego. By extending the normal hour-long incremental parameters of our concentration Dean has us dwell in our barely conscious complicity in the destruction of our planet. We feel his urgency with each check of the watch or flicker of the mobile screen. How much can we bear until we decide to act?

Through Infinite Item I was also reminded of the role of dance in a ‘traditional’ Aboriginal community context whereby each performance is a bodily recitation of law and a good dancer is one that can lose themselves to become an ancestral entity, be it shark or star or mountain. Through Infinite Item I similarly witnessed Dean shape shift and with his body propose laws yet to be realised.