As I watched Trish Wood move with deceptive facility in her reach across an alternative time space continuum to communicate with her namesake in Trisha Brown, I realised just how powerful dance can be, in creating a community from the malleable places in our individual imaginations, of which words can only inadequately define.

Watching Wood summon Brown is like looking at a Picasso or a Monet, a Mondrian or a Kandinsky and thinking, ” a child could do that” or “I could do that” and knowing full well that the process of capturing, if even for a moment, that precise structured whimsy, that essential presencing or joie de vivre is the result of a lifetime pursuit. In this case, another movement or two to equal that of the expressionists, in the Fluxus and Judson Church Postmodernist collective whose major exponents included Merce Cunningham, John Dunn, John Cage, Robert Rauschenberg, Steve Paxton, and Yvonne Rainer all challenging the dominant tropes of performance associated with the Classical European lineage.

In her podcast interview with Artemis Projects* Wood described her fascination with Brown’s Water Motor and confessed to learning it from an archival film clip as one of her self-imposed tasks. One may well ask, “Where’s the merit in beginning a process by switching on a video and copying another’s work by rote?” However, there is something to be said for letting the body lead, instead of the mind with its words, in the arbitration and conciliation of another’s way of being in and with the world.

I relate to this process from an Indigenous dance perspective in that when we learn the dances from cultural Elders and consultants from other clans we are called upon to utilise the concept of dadirri (deep listening) described by respected Aboriginal activist, Elder and Senior Australian of the Year (2021), Miriam-Rose Ungunmerr- Baumann from Daly River in the Northern Territory as a process combining active observational skills with contemplative meditation.* In dadirri Ungunmerr-Baumann is describing a tacit form of knowledge transmission which involves an alternative view of being in the world. Knowledge becomes a rite of passage that reveals itself through time spent engaging with that thing you are doing rather than a process of accumulating data through a process of asking questions as a right to access, which relegates the body to a secondary expressive role to the spoken discourse that inevitably precedes it.

In the act of mimesis Wood is physically absorbing Brown’s way of being in the world rather than learning an interpretation of her way to be. Trish Wood refers to performance theorist Andre Lepecki’s paper, The Body As Archive (2010), in which he also asserts the body as a repository of information, or knowledge site, which has the ability to generate discourse and creative synthesis, expressed as an impulse to re-enact, through the hermeneutic act of performance.*

In this digital era of ubiquitous accessibility, we have also entered an era of extreme surveillance, an era where we have also developed a hyper sensitivity to any form of appropriation and consequently a hair trigger for litigation. This is a sad situation as it necessitates and legitimises the spoken and written disciplines as the highest forms of engagement with art, artists, their work and their world relegating all other forms of expression as merely ancillary.

Regardless of the politics complicating some of Trish Wood’s investigations she is at the top of her game in terms of both physical/ technical and emotive/intellectual prowess. It was an incredible delight to see her move with such lightness of being and sharp dexterity, to feel the connection between her and the sounds her body synthesized as a conduit of Trisha Brown through her collaboration with sound engineer Benedict Carey with the aid of a mixture of digital and analogue instrumental accoutrements including oversized rabbit ear antennas.

The performance culminated in an invitation to lie on the studio floor where we were treated to an aural sojourn to outer space guided through Trish’s soft narrative (as the result of a collaboration with writer Cleo Mees) which included a multisensory interweaving of memories from her youth in yet another activity emulating an early radio performance of Brown’s.

This intimate sharing of a work in progress at the Rex Cramphorn Studio was just the thing to combat what has become an assault on the senses in performances of late. A delicate intricacy of gesture, a compelling utterance amongst a sea of declarative pomp and circumstance. I can’t wait for the next stages and to see more of Trish Wood dance. 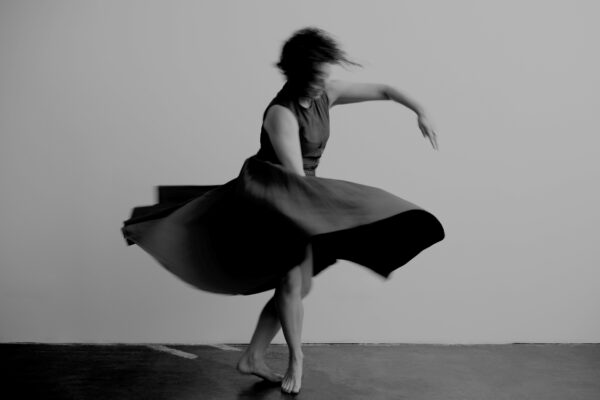