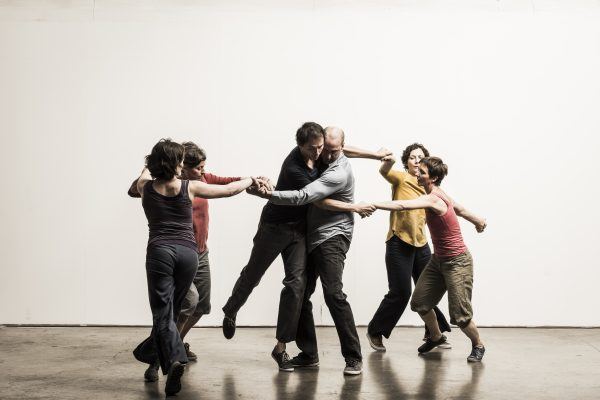 Time Over Distance Over Time

Last night I was back at what seems like my second home, where Liz Roche Company commanded the space of my last theatrical effort, the Lennox Theatre at Riverside, with her latest choreographic work titled, Time Over Distance Over Time.  This work tackles themes of cultural specificity; of place and identity, how this is defined, organised and expressed the further one is from one’s place of origin. This topic is  an increasingly pertinent one, as borders become blurred and a fast developing global identity is assumed, through virtual and digital media.

Roche’s opening sequence saw the dancers blindly reaching  for what I assume is kin. The six performers made a circle and spun. They lost contact then reinstated themselves time and again, each time becoming a more complex bound organism. Occasionally I heard their sneakers squeak as they shifted on the floor, their bodies beginning to move like fast whispers.

Right off the bat I saw the performers as people who appeared as if plucked from a rather non-descript crowd. They had the potential to be any one of us, despite a performative distance  maintained as a clear dichotomy between the audience and the action on stage. While the movement was by no means pedestrian there was an imbued quality of the everyday, the performers’ bodies seemed to be talking, to each other and to us, through stretched gestures forming elongated conversational lines.

I saw each performer more clearly and assigned  to each of them a distinct personality, long before they were formally introduced to us, through a sequence whereby Jenny Roche recalls her first meeting with each in turn. I was first struck by Grant McLay (whom I would mentally refer to as the burly Australian), the power in his arms as he broke the initial circles and the momentum his singular body appeared to generate as they reunited and turned. I  was mesmerised by the virtuosic agility of Kevin Coquelard, as his accommodating body deftly bent and twisted, while seamlessly segueing into and out of the floor. The unexpected whimsy  from Henry Montes in his short solo was captivating as he appeared to catch the air above with his hands and flick his feet with an air of secret mischief.  Simone Litchfield’s body had a surefooted steady line that reminded me of a long friendship and was rounded off with the sisters Liz and Jenny whose similarity of appearance anchored acast, which successfully represented the subtle (struggling/diminishing?) diversity they were exploring.

It was exciting to be able to watch performers with such an impressive collective experience.

Aideen Malone’s lighting design was both simple and complex. Simple in that there was a single overarching lighting state that lit a large white rectangular dance floor, which occasionally grew to accommodate action outside an initial clearly demarcated territory.

The set certainly did feel like a territory, a seemingly spare environment cleverly augmented with two TV monitors displaying identical footage of what would be the performers’ images, appearing slightly disjointed from the action as if intended for another separate audience, or perhaps as captured memories. A quadrangle of suspended filament bulbs served to enhance the idea of communication by analogue means, while the cords served as a simultaneous inducement to contemplate the Irish wet (weather, which befell me on both of my forays to the Emerald Isle). The dismantling of a multi-faceted, lifesize, human, three-dimensional jigsaw puzzle, previously constructed just to the left of the white flooring and evocative of the self/ego one creates for each new situation, was eventually broken up into smaller jagged pieces and laid on the white tarkett to cement the vision of a mountainous climate (from whence the choreographer may have originally called home).

The idea of time being both a fluid and relational concept was enhanced by Ray Harman’s sound score, which was immediately reminiscent of the dodgy radio transmission from a beat up car. I imagined furious fingers worrying over a dial as it passed back and forth, training for reception. Swirls of static engulfed my ears, accompanied by a feeling of crawling impatience, followed by intervals of relief as clarity arrived, only to be lost once more into a sea of white noise.

This is not a show about shock and awe. If this were a movie, it certainly wouldn’t be one of those comic come-to-life blockbusters. The introduction of each new idea, be it geographic, sociological or psychological, was expressed in almost imperceptibly smooth shifts. In one instance Liz was   training a video camera on one of the side walls as the dancers walked into a familiar familial tableaux reminiscent of many a Christmas happy snap. They were then superimposed elsewhere, their disappearance and subsequent appearance, real and virtual selves intermingling as if teleported through time, felt deceptively low key.

Ultimately the strength of this work was Liz’s ability to lend a gentle poignancy to the incremental commonplace (non)events that are fast becoming an imperative, in the maintenance of interpersonal relationships over great lengths of time and distance. Through the design of an interdisciplinary experience, Roche created choreography that complemented, rather than single-handedly drove, the work. To utilise  technology and not have it dominate the experience is no mean feat either.

I thought I remembered seeing and writing about this company when I travelled to Paris in 2013. I visited Dublin once for the IETM and once for the Dublin Dance Festival. What astonished me then was the fact that there were no tertiary dance programs. Yet there was (and is) a thriving dance sector. As we contemplate the rocky status of our arts funding future, take a moment to think what it might mean to be creating work of this standard in a discipline without any academic infrastructure to support it. Hats off.