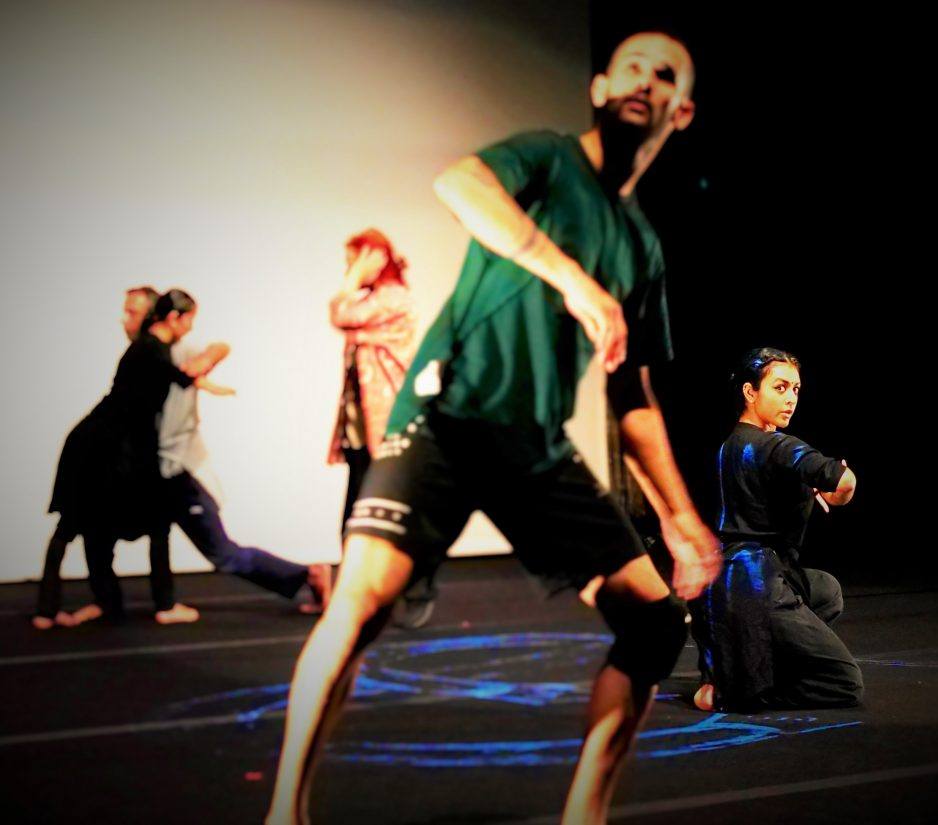 I close the blogosphere this year by regaling you with a personal choreographic (ad)venture.

I have been in the midst of a choreographic maelstrom. Ever the typical independent artist, I have closed 2018 working double shifts on four choreographic projects. Not greedy, no, just out of necessity (and good fortune).

This past week I have completed a collaborative project with classical Indian dancer and choreographer Anandavalli (yes only one name need suffice, think Madonna or Anton in choreographic circles) director of Lingalayam dance company. Together we worked on the first official development of The Serpent/s project, which grew out of a modest week-long initiative – seeded by Critical Path in 2017 – which paired four couples in open ended choreographic exploration.

From this initial period, we developed a rudimentary narrative, whereby an Aboriginal clever man calls to the rainbow serpent and accidentally summons the Indian snake goddess Nagayakshi.

During this period Vali brought in a book of stone snake carvings, from which three were chosen. One became the root of most of our choreographic vocabulary. Each day I would mark the floor in chalk. Then we would begin articulating the complex knots of the snake’s coiled body, first as a floor pattern, then as the impetus for movement in the spine and lastly as a pathway for accumulating gesture.

Anandavalli stipulated from the beginning that our choreographic languages were to be separate and discrete from one another. I didn’t realise how important this was at the time, nor how complicated it would become. I never realised how prized our dance is, how expensive, until both Vali and I each defended our dance with every vestige of passion we possessed.

It soon became clear that our dance wasn’t to be about a serpent narrative at all. The Serpent/s project saw us brokering our cultures in order to have them successfully lie side by side within a work of art. The Serpent/s project was as much about our extended communities and our obligation to represent our cultures in a way that would be deemed appropriate. With each outward choice a tacit pledge was made to uphold integrity. This was of paramount importance.

So when the narrative ran dry (because there was no planned ending) the real collaborative agenda came to light. For me it was about not being in full possession of my cultural heritage. Aboriginal cultural practice is to me an incomplete jigsaw. I utilise all of my choreographic nous to work out the relevance of what little I do know within post-colonial Australian society. Before I lose you with that nifty piece of jargon I’ll give you an example. What purpose does speaking Wiradjuri language serve other than a decorative one of entertainment value?

The passionate Aboriginal artist in me would be quick to inform you that Wiadjuri language grew from the land and that perhaps speaking that language holds the key, a key, to the current environmental sustainability crisis. Perhaps. (Sounds a tad far fetched I know.)

For Anandavalli her link to culture is the dance. She is always reminding me that she broke away from tradition, especially the primary female gender role she describes as ‘the eternal bride’, to devote her life to dance. Anandavalli possesses a fearless attitude towards her traditional form. She has chosen to implement a bold contemporary direction, incorporating the practices of several other contemporary choreographers, to extend her own. From working with Japanese drumming company Taikoz on a choreography titled Chi Udaka to working with Narelle Benjamin on a two-hander titled Kaal, Anandavali seeks new and challenging experiences.

To be counted amongst such company is both flattering and daunting.

For me the underpinning work methodology of The Serpent/s project was to develop choreographic structures which both of us could adopt. How very naive this was of me. It soon became clear that Anandavalli’s knowledge was very extensive and ingrained from years of specific training. By articulating such tacit practices this could mean destabilising her own clear and decisive intuitive creative choices based on existing, comparatively ancient, structures.

In this instance I learned that the dance was never really about the dance at all, while simultaneously being all about the dance. Needless to say we had a showing in development, which felt a bit like an anti-climax. Serious politics were intricately woven into an attractive extended dance sequence.

As the new year approaches I will contemplate how to move forward with this project. I will mull over how to encourage investment in dance relationships as well as products or outcomes. I will also make it my mission to include this agenda in my future critical reviews. Until then see you on the flipside of 2019.