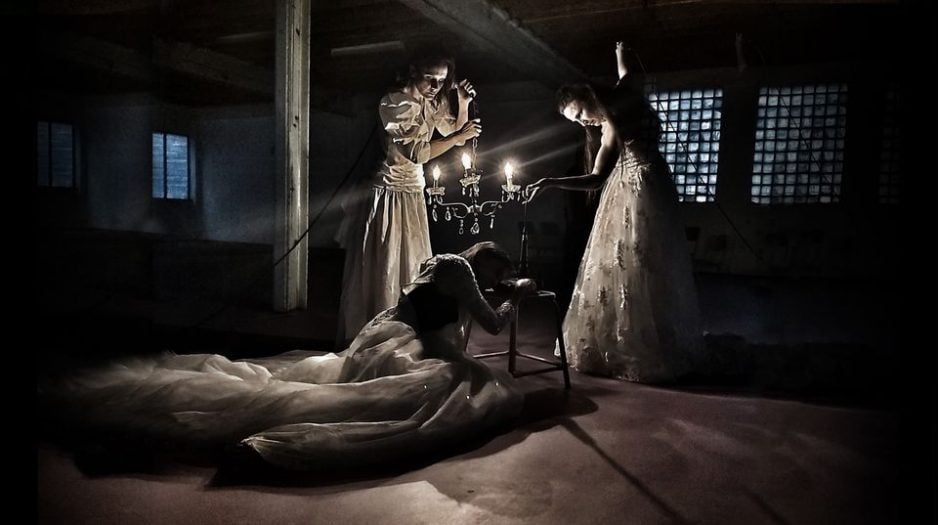 the foul of the air

What happened to March then? I distinctly remember pledging to be all over March Dance like a hot rash or ‘white on rice’ but unfortunately by the time I was free to get right into it March rolled into April and I caught just one event.

The one event I speak of is Michelle St Anne’s the foul of the air presented under the banner of The Living Room Theatre which St Anne founded in 2000. If I was only going to catch one show on the March Dance program I am thankful that this was it.

I decided to ride out to the theatre space located in a disused garment factory in Summer Hill, from my abode in Annandale, on my collapsible bike with the seat jacked up higher than the handle bars to compensate for the small pedal arms on the crank. Riding that bike always makes me feel like I’m enacting a scene from the road runner cartoon with my legs comically moving double time in order to cover half the distance. Nevertheless, riding always puts me in the right frame of mind for a show. As my legs moved repetitively up and down like pistons, whilst navigating the darkening streets of Sydney’s inner West, I thought about the words advertising the spectacle I was about to experience. I found myself repeating as a mantra, ”a dance without steps” and “music without a score” as I traversed the manic hustle and bustle of Parramatta Road, followed by the bumpy hidden path that runs parallel to the railway line connecting Stanmore Railway Station to Petersham, then just past Lewisham Station where I pumped my feet furiously on the pedals so as not to get swallowed up by the steady stream of speeding vehicles accessing the Smith Street roundabout, which led me right to the venue.

Sometimes the time spent in anticipation of the action is the part of the evening to be savoured. Happily, in this instance, this was not the case as the best was yet to come.

Upon arrival I was led up the stairwell by the feet of those, who seconds before me, had appropriately tethered themselves to the locale via the tiny square patch of visual white noise, also known as the ubiquitous QR code and onto the floor where the foul of the air would be revealed.

I’d not seen any of St Anne’s works and was surprised to discover the prolific creative output from her company, which currently tallies at 26 productions spanning two decades. I was seated with one of the Sydney dance community’s firmest fixtures, Tess de Quincey and best buddy choreographer Raghav Handa. Wouldn’t you know it, none of us had seen one of St Anne’s works. What the? How could that be?

Finally nestled at a table for four I perused the space, which felt like a club, cosy despite its generous dimensions. The stage space was set off kilter, on the diagonal and punctuated with small pillars. Rather than a hindrance to be ignored the pillars, became a feature, aiding both the flow of movement and generating a myriad of atmospheres for the many tableaux within which the performers would eventually reside.

The show began with a curious monologue delivered by St Anne, about donkeys in a small pocket of light in the upstage right-hand corner, whilst in the centre a woman dressed in a night gown was arranging bricks on what appeared to be a kitchen cabinet (Cloé Fournier). This was followed by a woman (Imogen Cranna), also wearing a nightie, appearing in a shaft of light. The rise and fall of Cranna’s feet, combined with a repetitive hand gesture motif, which clapped and flickered as she unsteadily processed forwards and backwards reminded me of candle light at the mercy of the slightest breeze, so deliciously vulnerable and ethereal was Cranna’s initial appearance. Before long a third female dancer (Renata Commisso) appeared to dance a disjointed duet with Cranna before all three adjourned to the side wall to lean against it in dispirited despair.

Meanwhile in the shadows another loose procession was taking place. As our eyes adjusted to the low light, what seemed like disproportionate hulking forms were revealed to be the bodies of men, appearing as mysterious apparitions in zombie white-face paint accentuated with black jagged stitch-marks. With their feet adorned in black double pluggers, the men simultaneously played whilst manoeuvring double basses, forming a disquieting image at once both commonplace, almost banal, and yet menacing.

I could go on to describe rich imagery after rich imagery, including a lone woman in a sequined dress dancing in the moment, before being violated, her shoulder length hair shaved from behind and left in a lifeless heap, to a female trio dressed in Victorian white, intently peering at nothing in particular, by the low light of an incongruously hand-held chandelier. From a curtain drawn back in time, to the baroque period, where the men and their instruments huddle close, collectively inspecting the supine form of an inanimate femme fatale (think Rembrandt’s painting The Anatomy Lesson of Dr. Nicolaes Tulp (1632)), the action shifted yet again upon an exquisitely slow unfolding sequence of a siren descending the stairs, one by one, enticing us with each high heeled foot fall, only to walk across a pile of metal coat hangers arranged like hot coals, her legs unfolding, unfurling to lengthen at hip height before making contact with the dangerously hap-hazard metal formation below.

As each vignette unfolded we were bathed in the immersive sounds produced by the oversized stringed instruments, which roved in varying proximity to us as well as each other, rendering the music palpable, permeable. When one player stated in an almost offhand manner, “It’s about a seven, let’s crank this up to a ten” we were treated to a veritable stringed assault. It was joyous.

I remember turning to de Quincey half way through the show and confessing my omission to read the program notes in preparation, so extraordinarily rich, varied and puzzling were the textures on offer. I also recall wondering why the female characters seemed powerless, almost without reprieve. This disturbed me.

On the ride home, in performer Cloé Fournier’s car, Fournier shed insight into the work. One of the overarching thematic drivers was based on prize winning author Charlotte Wood’s novel titled The Natural Way of Things (2015), which is billed as a dystopian tale set in the Australian outback, in the vein of Margaret Atwood’s The Handmaid’s Tale (1985). In a brief conversation with St Anne afterward she revealed the lone woman dancing in the sequined dress was inspired by the widely publicised horrific incident on a cruise ship involving 41-year-old Dianne Brimble who was drugged, assaulted and abandoned unconscious and left to die.

After conducting a little Google (re)searching  into St Anne I think I understood why the women were so tragically portrayed, so helpless within a work that was so poetically charged. The beauty of the images made their incongruously poor circumstances acceptable, in turn making the foul of the air a timely work about how easily we become immune to the mistreatment of others, especially women, without becoming overly didactic.  the foul of the air was a work about framing, which prompted me to ponder, “When is it ever possible or even permissible not to notice a tragedy as heinous as that cruise ship incident? When so many fellow cruisers are under the influence, who can tell whether one is merely ‘sleeping it off’ or in mortal danger? Unless it’s deemed newsworthy for a few short cycles in the media, who even cares?”

It transpires those words I used as my cycling mantra, which St Anne used to describe her show, were inspired by German composer Heiner Goebbels’ work Stifter’s Dinge (2008) in which he similarly described his production as, “…a play with no actors, (and) a composition for five pianos with no pianists”. A proposition contained within the title of Kate Connolly’s review of Stifter’s Dinge for The Guardian stating, “What if the actors stood aside and let the props steal the show?” was later utilised in Goebbel’s marketing in order to extrapolate on his intent to bring the phenomena of the theatre to the forefront of the audience’s attention ahead of the actors. If this was also one of St Anne’s underlying intentions it was not fully realised as her cast was comparatively as strong and equally compelling as the environs they inhabited.

Like Goebbels, St Anne drew inspiration from many sources including the academic, in the articulation of her thematic provocations. The curious text referring to both a cross, which was later painted on performer Cloé Fournier’s back, and a donkey, referred to both Christian folklore which tells of the donkey baring the mark of the cross after carrying Jesus to Jerusalem and the Judas method of culling donkeys in Australia. In their paper ‘The Fate of the Illegible Animal: The Case of the Australian Wild Donkey’ Celermajer and Wallach, describe the status of wild animal species introduced post colonial settlement as ‘illegible’, little more than a pestilence. The Judas method entailed capturing and affixing a tracking device on a Jenny (female donkey), whereby upon releasing her she returns to the heard and they are all killed.

It was the dominant presence of the basses which ended in the prolonged furious stringed cacophony which gave the final nod to Goebbels. By their sheer size and volume, it was the instruments which left one of the most, if not the, lasting impression as, like Goebbels with his entreating pianos, St Anne’s basses finally cut the stage space to intrude upon ours, literally up close and personal.

Overall the foul of the air with its complex non-linear, non-narrative format gave me much to think about and it was delivered at the ideal pace to afford me opportunity to experience those little revelations while they were unfolding. I sure hope this work enjoys a few more seasons yet. It deserves it.

(I’ve given up making promises for future blogs, so until next month!)

“When pianos attack | Theatre | The Guardian”

The Judas method of donkey culling