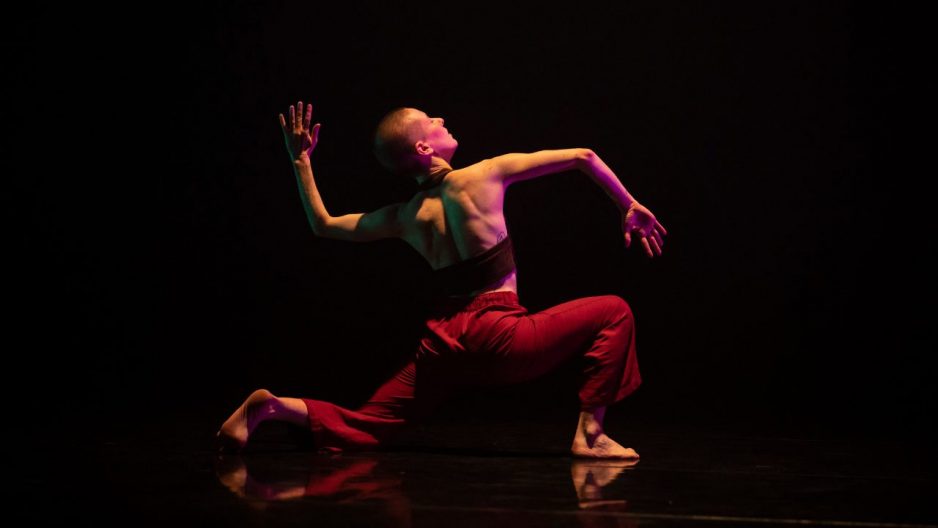 The Doors Are Officially Open

The doors are officially open. Disclaimer – line up, get the phones out and don the masks, socially distance from the masses in discrete groups and conduct your greetings in loud declarative voices, from an expanse of empty chairs in between, before the lights dim. Yes, the disinfected doors are open and the theatres are receiving our patronage. I daresay all this very necessary hoohaa is reminiscent of the pomp and circumstance contained within a Jane Austen novel and upon gaining entry I couldn’t help but dance a little jig of joy.

Branch Nebula’s new season, titled Crush, was well worth the extra palaver. As we entered the theatre Lee Wilson and Mirabelle Wouters were already on stage, positioned up front and centre. Snugly contained together within an oversized Ziploc bag.  As the lights dimmed, the air was slowly sucked from their makeshift enclosure until, with faces squished and bodies blurred, they were successfully shrink-wrapped into the familiar indiscernible form of packaged produce.

The drawling pace of the ensuing action afforded us a relaxed perusal of the busy set while imbuing the remaining objects with imaginative potential. Wouters had dressed their immediate environment with a variety of everyday objects, from kitchen utensils to rat traps, from thick clusters of bright orange two-and-a-half-metre pvc tubing and to what turned out to be a catapult weighted with two industrial sized plastic receptacles.

The real genius of this work, and it was genius, lay in its seemingly ubiquitous accessibility. Wouters and Wilson are masters of their highly choreographic craft, elevating the everyday into a surreal theatrescape, by offering an almost tangible alternate reality, that we in the know recognise all too well, is only ever able to be fully accessed by very few.

To put simply, as adults we systematically lose our ability to free associate, to play. It is considered a sign of maturity when a spoon becomes merely something to eat with. In Crush Lee and Mirabelle prompt us to reenter the world of make believe.  Bodies can become oversized magnets, a hero can climb, teeter and conquer an unstable towering light show, can reel across an expanse of rolling polymer and vertically ready themselves, reed thin between two sheets of perspex for the admiring microscope, comprised of the collective eyes of the audience. Crush symbolizes the perfect antidote in this era of pandemic pandemonium. Crush prompts us to look for wonder in the most mundane. In a word – excellent.

In experiencing Crush I would be remiss if I didn’t make the link to Simone Forti’s Dance Constructions created in the early 1960s. I saw her piece Slant Board as part of a retrospective on the post modernist movement of the Judson Church collective at MoMa in New York last year (2018-19) whereby dancers moved up and down a board attached with ropes placed on an incline. Dancers recreating these early choreographies with simple objectives also engaged with a detachable see-saw utilizing varying balancing manoeuvres as the pivot point was shifted. Rounding out my unplanned excursion to MoMa was a performance conducted with a metal pail of nuts and bolts which was utilized both as a swinging pendulum and as an instrument producing an unsettling cacophony.

Crush, in comparison to those early Judson Church explorations, was imbued with an added sense of whimsy and with more than a pinch of the ridiculous thrown in for good measure.

From the sails of the Opera House I entered the industrial innards of Carriageworks to watch the latest, Sydney Dance Company’s seventh season of New Breed featuring the choreographic voices of four emerging choreographic talents. I will confess I was outside-eye, slash all-purpose sounding board to one of the featured artists, Raghav Handa, who I immediately wanted to claim as my progeny I was so proud of the artist he has become. It’s difficult to imagine our professional relationship began when he was a burgeoning dancer of nineteen, but therefore obvious that I would want to unpack his piece, titled Cult of the Titans, first.

With a duration of twenty-three minutes, Raghav’s Cult of the Titans has the potential to become a full-length work for many reasons. The work was not only well received but dramatically compelling, representing a breath of fresh air compared to many previous Sydney Dance Company offerings in which the performers are merely technicians, their faces and bodies often devoid of any emotional intent. Two performers in particular, Chloe Young and Victor Zarallo, heightened the work with their intense emotive commitment. Together, Young and Zarallo, with four other dancers, Telea Jensen, Rhys Kosakowski, Jacopo Grabar and Isabella Crain, formed what Raghav termed the ‘Titans’. Representative of the fervent energy associated with what we recognize as the Swastika. Like its realization, the impetus for Raghav’s work also proved to represent a departure from Sydney Dance Company’s norm. For Raghav Cult of the Titans attempted to reclaim the much-maligned icon, which for the better part of a century, has come to signify the atrocities of mass genocide occurring in Europe during WWII. For Raghav the Swastika is a symbol of peace, of personal and ancestral identity and in this light Cult of the Titans becomes a crucial act, not only an act of cultural reclamation, but of self-determination.

In Cult of the Titans Raghav is given the power, through dance, to infuse his voice, providing the audience with a broader view of history inclusive of the oft-silenced voices of the colonized culturally and linguistically diverse cultures.

The collective fervour of the Titans was offset by the softer yet equally intense dynamics of two solos performed by Jesse Scales and Luke Hayward.  Scales embodied the powerful aura or essence of the symbol and Luke a deity companion. When talking to Raghav, he explained cultural aspects that the audience could never glean from the work itself, which is a dramatic abstraction. In an Aboriginal context we term this as insider/outsider knowledge, information that is only properly or fully comprehended by the initiated. This transforms the work from a product of entertainment to a contemporary document facilitating cultural perpetuity.

Working backwards from Raghav to Wiradjuri countryman Joel Bray.  His work, Wagan, was inspired by two influences:  the Dreaming History told to him by his father about how the crow lost its colourful plumage; and the 1963 ‘whitefella dreaming’ Alfred Hitchcock horror film The Birds.   Adapted from writer Daphne du Maurier’s novel of the same name, the film features a famous scene of a fleeing Tippi Hedren being attacked by a flock of aggressive gulls.

The strength of Bray’s work lay in his interdisciplinary engagement of film, shadow play and live action on stage. This interplay between performative media successfully demonstrated the concept of the non-linear Dreaming chronologies depicted through the continually shifting scale of objects in shadow, coupled with the obvious cues to the nineteen-sixties era demonstrated through both costuming and Hitchcock’s filmography and the physical language performed by the dancers. This included movement vocabularies filled with the muscular intent that can also be associated with American Modernist dance, existing around the same era as the film, all housed in the present.

Bray’s work also represents a vibrant shift in the demands of the Australian theatre, which seeks to expand the confines and conventions of the western black box experience.

Continuing to work backwards, Sydney Dance Company member Chloe Leong was second on the playbill, choreographing Nostalgia. This minimalist work, featuring dancer Davide di Giovanni, who moved with effortless virtuosity dressed in a loose translucent shirt, under spare lighting made thick with haze, did indeed embody the elusive nature of memory. The ephemeral state di Giovanni evoked was offset by Rob Campbell’s sound score, Night, which emulated the steady rhythm of a heart beating. The palpable thud of the repeated bass note, felt kinaesthetically, reminded us that we exist in the here and now in comparison. Dancer Luke Hayward joined di Giovanni to create a disjointed duet. This is not a criticism but a description of the way Chloe artfully chose to articulate how memories, often originating as separate entities, collide in the mind to create new imaginative states. This work was a surprising gem which needed no introduction to help convey the message.

First on the New Breed bill was Sydney Dance Company performer Jesse Scales’ choreography, titled Inertia, an embodied examination of bystander culture. Scales utilized the whole cast which made for an impressive opening statement to the night. The dancers acquitted themselves well with Victor Zarallo fully committing to his role as the victim protagonist.

Ahh, all I can say is, “Thank god we’ve turned this corner. This bum is ready for seats.”