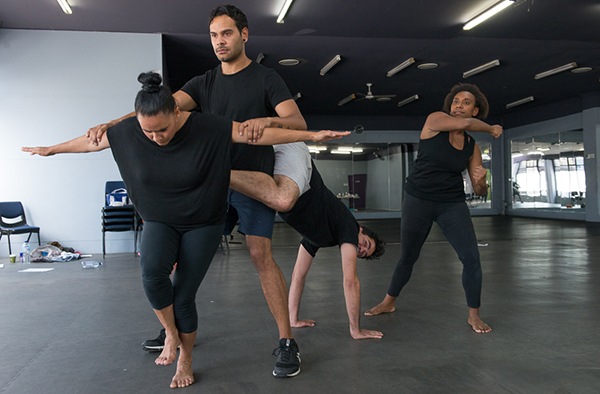 I’m writing to you from the bowels of the theatre dahlings. Riverside theatre.

Firstly, I must apologise for letting a few too many weeks pass before signing in. To say that this past month has been filled with a tumult of new experiences, accompanied by a rollercoaster of emotions, would be an understatement.

I write to you donning my inaugural hat as director of a more conventional theatrical production. Well, as conventional as I can muster. I am at the helm of National Theatre of Parramatta’s production of Stolen, a comprehensive insight into the history of forced removal of Aboriginal children from their homes and families.

But it is not this experience alone that I speak of. To be chronologically exact, my new foray into the theatre began with a residency at the new studios in Parramatta, titled and located on 404 Church (Street).

This was actually our second bout at 404, our first occurring earlier in the year, when we were its sole occupants and the place still bore the visual remnants of its past usage and occupancy by the get-fit-quick gymnasium set. The floors were comparatively uninviting, hard and uneven, the enclosure, one big and endless spacious open maze, consisting of a mirrored workout zone, a long corridor and a back/front room that led to a very well hidden water fountain. Every word was simultaneously echoed and swallowed up by the cavernous structure.

Months later, on our return, we had neighbours. The once unified entity could now simultaneously accommodate up to four different activities. Martin del Amo’s second development of CHAMPIONS was housed in the refurbished workout zone, with three walls of floor-to-ceiling mirrors to catch and reflect every movement nuance, and flooring that felt akin to walking on pillows in comparison to our previous punishing experience underfoot, situated adjacent to our elongated sun-filled studio.

While we were emoting with a vocal range pitched to the uppermost seats of the raked seating at the Lennox, I would spy Martin’s cast honing their collective game face, perfecting their reflexive quick twitch and executing tactical manoeuvres with serious intent. To put it plainly, I was jealous. My dancing body would perform minute contractions of empathetic flight-or-fight readiness each time I neared the vicinity of studio del Amo.

Annalouise Paul rehearsed her solo (featured in the last blog) in what would have initially been the reception area. I fully expected to hear the fast repetitive clatter of flamenco tattoos, amplified by the tiny nails hammered into her shoes, but no. Perhaps I was too immersed in my own unveiling process to notice.

Every now and then a loud cheer would erupt from the space upstairs but maybe my upward attention coincided with my thirst from frequent forays to the water fountain and not from any specific dominant vocal theatrical din.

Why is this space so important that it warrants its very own dedicated blog? Well because this is where industry friendships and valuable networks are forged. I don’t think I’ve ever held an official audition (until this production), instead most of my hiring choices have been made after a quick but stealthy gaze into a filled and active studio or as a fellow participant in a workshop. Come to think of it, I haven’t really auditioned for work myself much either. My employment opportunities have often been the result of a chain reaction of exposure in the hub of similar real estate rehearsal beasts.

When the original Parramatta rehearsal studios, located directly across the street from the railway station, were finally closed to make way for the latest residential monolith, I was initially dismayed. It had taken a while, but FORM Dance Projects had cemented itself as a viable alternative to Ausdance, with a venue to house classes proving easy access to and from the city and an impressive array of teachers signed up to take class including Kristina Chan, Brooke Stamp and Miranda Wheen.

I am chuffed that momentum can now be resumed and I supply wholehearted reassurance that, not only is this still a convenient trek from the Sydney city centre, but that the surrounds are a little more inviting, as the new digs are located a block from Parramatta Park, still only a 10 minute walk from the station, max.