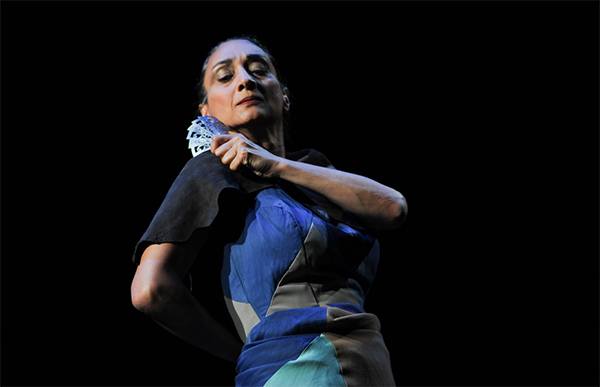 She stood still, her eyes mere hollows in shadow, gaze direct atop a spiralling torso, taut arms framing her body. She is a statue, a monument or a woman caught in a moment. A monumental moment in history perhaps.

She changes the arrangement of her costume, a voluminous dress consisting of geometric panels with a detachable piece of fabric that looks as if it’s made of hide. She manipulates the fabric, her fingers whispering a secret, always emphasising her femininity, altering the purpose from cape, to apron and finally bustle.

From a statue, she becomes a frieze, a series of shapes in relief as she slowly traverses the back wall. Is there a narrative held within the sequence of poses? For the poses are imbued with a sense of weighted import, reminiscent of the stations of the cross or the nubile bodies adorning an Indian temple.

The dancer is Annalouise Paul and she is performing her own choreography, titled Forge, as part of a double bill with Pepa Molina at Riverside in Parramatta.
Yet again I am guilty of idly staring at the front cover of the program in lieu of boning up on what is to come. In the program much later I discover that Annalouise’s solo was inspired by a trip to the Alcazar gardens in Seville and the discovery of a subsequent link to her ancestral heritage. No wonder then the gravitas of the work.

It was not my curiosity of the subject matter that took precedence. Rather, the initial austere movement language combined with geometric costuming, which reminded me of Picasso’s Women of Avignon and Martha Graham’s Steps in the Street. This seemed inspired by Picasso’s Guernica and the repetition of geometry in the pattern of white tape stuck to the floor, demarcating the centre of the stage, possibly as a symbol of Judaism (Annalouise’s ancestry) or (more likely) a maze of foliage from the garden in question. I was reminded of Isamu Noguchi’s sculptural set piece to Graham’s Embattled Garden. Pepa Molina’s Bush Bailando (to dance, to jig) was a more conventional rendering of the flamenco form and a definite crowd pleaser. Her formidable footwork beating out ever increasingly complex tattoos. The premise of this work was to recreate a world within a world, to highlight the unlikely juxtapositioning of the Spanish form and its execution in the Australian environment.

Molina made an attempt to find a meeting place, entering the stage through a forest of white wooden canes, whilst stepping gingerly on dry leaves, with an audible crackle as they snapped under foot.

Molina’s performance is episodic, consisting of shorter sharp pieces interspersed with the exquisite musical stylings of guitarist Marco Van Doornum and saxophonist Stuart Vandegraaf, both of whom played intricate melodies, full of passion, tinged with poignant melancholy.
There is a dance of crickets as Molina places her hands into what resembles a mound of insects manufactured from castanets. There is the dance of new growth as Molina begins another piece, emerging from a self-made bifurcated clam or budlike enclosure, consisting of many ruffles of what becomes an elongated skirt/fishtail. She deftly breathes life into this with well-coordinated lower-leg flicks and tassels.

Throughout the work I found myself sending Molina telepathic messages to return to the leaves and explore more fully the extent of her training as an interactive medium with them. I couldn’t help thinking that what I was witnessing was the precipice of a very new and exciting artistic direction for Molina.

Sitting directly in front of me was Nick Power, choreographer of Cypher, presented at Riverside as part of Sydney Festival earlier this year. His presence prompted an instant comparative enquiry. How to translate a form which necessitates operation in short bursts of activity to a format which lends itself to a longer, more sustained, presentation? How to negotiate the expectation of spectacle with cultural or conceptual significance, when the two aren’t necessarily mutual or applicable (as was the case with Annalouise’s Forge)? What are the processes of determining which elements remain and which are left out?
This I know and recognise, as an Australian indigenous performer/choreographer myself.

It is a rare treat to be able to witness two powerful, sophisticated and very accomplished performers share their interpretations and developments of an ever increasingly popular endeavour, to re-imagine and contextualise classically specific movement vocabularies, for a contemporary black box experience.
Still two performances left. Moments not to miss, Annalouise Paul’s roiling liquidity as the lights slowly fade, Molina’s rhythmic prowess dancing with a cane under a pool of intense light. And the musicians. It is wise to heed Molina’s instruction here and close your eyes to just immerse yourself in the aural splendour.

book tickets to one of the remaining shows here.