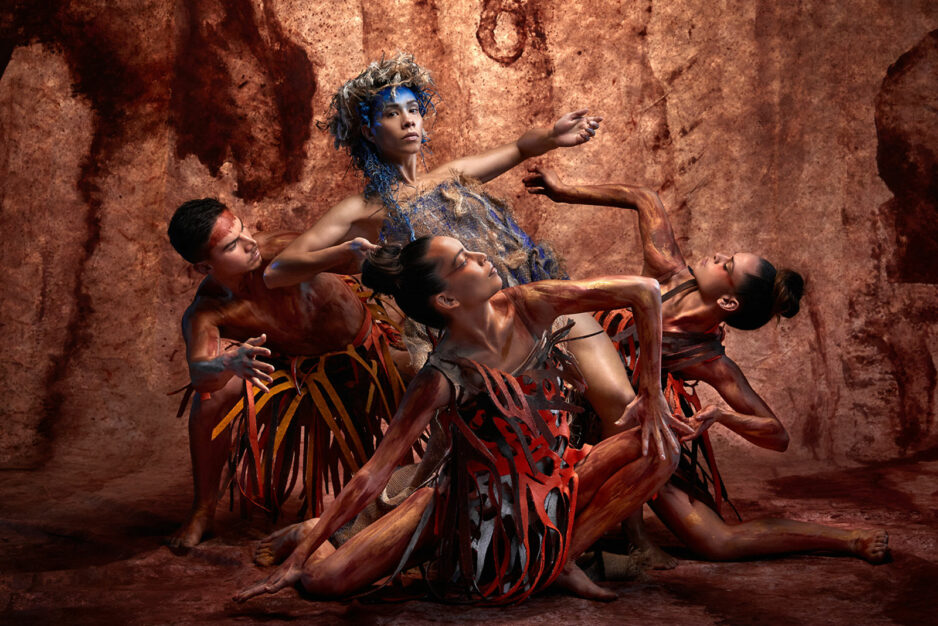 I still recognised the signature physicalities that have now become firmly cemented within the Bangarra contemporary Indigenous repertoire, including the direct gaze to the audience, which was so powerful when employed in the seminal Bangarra work Ochres. The gaze I associate with the Yolngu Mookuy or devil dance along with the slow stepping, in this instance mainly performed by the women, for exits and entrances, which, minus the flick up of the feet at the back, less resembles the stealthy footfall of a spirit or clever person, feels more akin to a classical balletic promenade (not of the turning kind). I also recognised the inverted floor posture resembling a contorted yogic plough and the sickle footed walk, which feels so delicious to execute because it literally breaks the hearts and psyches of every budding balletomane to which the sickled shape is absolutely verboten.

But it was the exaggerated undulation of the torso so stunningly executed by female dancer Lillian Banks, that saw her transform from human to a more transitory malleable entity, which prompted me to sit a little further forward in my seat. During the female processional dance titled ‘coolumun’ Banks’ body was bent so impressively low in comparison to the other dancers it was as if she alone were hearing some secret from beneath the earth. Banks’ commitment to the action reminded me of former company dancer Tara Gower who I had described in Patyegarang as a fisherwoman amongst an ensemble performing a beautiful dance about fishing.

From the men it was Beau Dean Riley Smith’s comparatively substantial form in a trio in chains that pulled at my heartstrings. The choreography, which began upstage centre, slowly moved forwards utilising a language of cruel adjustments, including tugs on the neck, which made the metal chinks clink. The bodies of the trio seemed all the more savagely brutal because we weren’t privy to the perpetrator.

Of course, as usual I read the program notes many hours after the memory of SandSong had shifted from short term to long. In this case there were so many personal familiarities it was difficult to be the objective eye. I had at some stage taught so many of the current cast members as burgeoning artists whilst training at NAISDA that there was not a single burst, but a repeated swell of pride, to witness their evolution as professional performers.

There is a personal memory of that same transition which occurs when I go to any Bangarra performance. I think of the time Associate Director, Frances Rings, and I were both ambitious students, driven to forge dance careers from relatively undisciplined bodies. I remember seeing her first choreography with a broom and just knowing that someday she would make a career of it, her ability to transform that utensil into an erstwhile partner, inevitably sealing her fate.

Each time I sit to watch a Bangarra Dance Theatre performance I have momentary flashbacks to the first time I encountered Stephen Page when he entered the garish green upstairs studio at NAISDA, to teach us class in preparation for his choreography, for the annual end of year performance he was invited to direct. We were all abuzz with excitement because he had taken time from his schedule as dancer at Sydney Dance Company to work with us! We were the guinea pigs or test dummies for the development of a kinaesthetic language that for many years would be solely synonymous with contemporary Australian Indigenous dance.

SandSong is all the more special for the legacy of the person, people and place it honours.

Christmas Creek in the Kimberley is the first place I experienced culture shock… I mean, a cultural residency, then aptly called Trad trip, as part of the NAISDA student body. When the Bangarra cast came out with smoking clumps of spinifex raised above their heads in SandSong I instantly recalled how unforgiving it is to walk upon those thin grassy spikes of potential torture, the soles of my feet momentarily smarting at the thought. Watching Jacob Nash’s cyclorama morph from a rich golden hue to a blood red prompted me to remember the power of the sun’s rays up there, the exposure of our bodies also changing hue to a burnished brown, or in my case shocking pink, as the elders took us out to the peripheries of the camp for women’s business more than thirty years previously. They sat us down and one by one lathered us in Crisco cooking oil before tracing their Dreaming on our breasts with that deep red pigment, singing all the while.

I remember wondering why every man, woman and child at Christmas Creek had short hair. On the last day we were gifted dancing beads. At over four feet long, those beaded dancing necklaces were held together by a thin chord, hand spun from the hair of that community.

I remember tap dancing on an impromptu stage of doors, with the knobs temporarily removed, in order to entertain our small audience. The experience of being up there ‘on country’ was relived in the moment each time I put my feet into those shoes, because the suede insides were permanently stained from the dirt of that place.

I remember one young woman who had a wide smile, the longest limbs, and a brash unapologetic laughter to boot. A keen observer who was able to sum up what she witnessed with a concise commentary that would invariably have us in stitches or, in my case, awe. She possessed a confidence that comes from knowing exactly who you are in the world. She would begin study as part of the new intake at NAISDA the following year. She inevitably went on to become a celebrated actor and comedienne and even though her life was sadly cut short, the textures within the SandSong sound track featuring her soft repeated whispers, which echoed and traced the topography of her homeland, tugged at my psyche.

Vale Ningali Lawford-Wolf. And thank you to Frances and Stephen for making a work that honoured the woman and place that has so quietly shaped so many of our bodies.

Maybe there will be a sister work which will highlight Ningali’s cheeky yet infectious humour. A humour that only comes from that sharp desert insight, combined with the economy of words spoken by people whose second, third or fourth language is English.