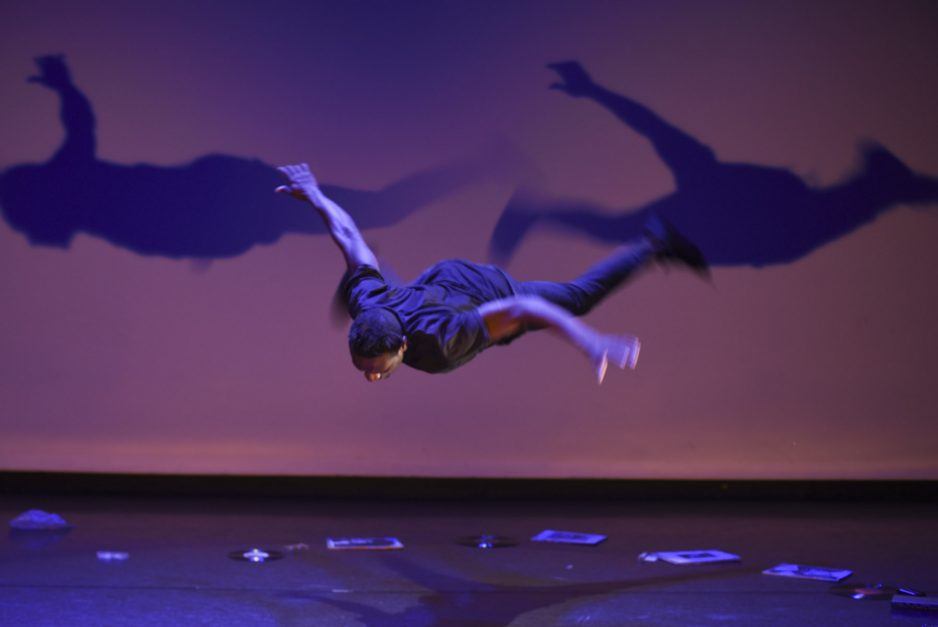 Ritual – Passing It On

Ritual – the doing of the thing and the active witnessing of it.

It’s been about a month since the last offering of Dance Bites 2019 at Parramatta Riverside Theatres. This season, titled Passing It On, was presented as a double bill featuring Ryuichi Fujimura’s How I Practice My Religion and Lucky Lartey’s Full Circle.

I will come clean. I was mentor on Lucky Lartey’s piece, well, just a sounding board really. Lartey’s exploration of the provenance of contemporary African expression was right up my alley as a contemporary indigenous choreographer. In Full Circle Lucky was asserting his theory that Black American hip hop culture can be traced to the practices of the West African griot.

“Who or what is the griot?”, you may ask. Lucky describes the griots as the human equivalent of an encyclopedia of West African culture, as holders of vast knowledge regarding history, narrative, geneology and tradition, transmitted through the oral practices of storytelling, poetry, song, dance and music. Lucky shared footage of the griot, featuring men who were presiding over ceremonies and/or playing instruments. One film featured two roving musicians who sang and danced while playing the kora.[1]

In a TedX presentation Sibo Bangoura summed his experience of griot very succinctly, describing himself as having been born to, and living inside, the music.[2]

There is much to say about Lucky’s physicality. It was supported by a strong rhythmic component, either presented as the recorded musical accompaniment driving the dance, or in a melody sung by Lucky in an African dialect, or demonstrated as a form of body percussion. Lucky’s dance virtuosity was also showcased in his aerial ability. At one point Lucky was captured by photographer Heidrun Lohr flying horizontally through the air, appearing to suspend time.

One of the strongest moments in the work occurred when Lucky suddenly transitioned from a seated squat into a moving backbended bridge whilst reciting, “Say it loud. I’m black and I ‘m proud.” The combination of an almost palpable feeling of exhaustion from the execution of Lucky’s topsy-turvy quadripedal locomotion, in conjunction with the words from the popular James Brown funk anthem, provided a striking metaphor for the struggles incurred and endured as part of the Black American activist movement of the mid-twentieth century.

I had first seen this backbend element in development as part of a varied program of short performances, curated by Readymade Works, at Critical Path in late 2017. Perhaps the in-development nature of the presentation meant the framework was more sparse. It allocated more time and space to the sustained backbend, heightening my experience of the physical discomfort generated, leading me to believe sometimes less really is more.

Throughout his process Lartey was adamant that his work was not to operate solely as a product for Western consumption. It was not clear to me what else it could possibly be, given that the audiences were predominantly Western theatregoers, until the last evening’s performance. On the final night, the concert stage was transformed into a ceremonial site in its own right when Lucky performed a libation ceremony as the griot. A call and response element was initiated whereby the audience was instructed to shout “yow” as Lucky raised his arms above his head. Without prompting, a small African contingent spontaneously called “yow” in unison, at intervals which were not prompted by Lucky, and proceeded to recite parts of the body of Lucky’s text with him.

During this display, I was reminded of a similar incident during a performance titled TEMPEST: Without a Body by contemporary dance company Mau under the artistic direction of Lemi Ponifasio (Sydney Festival, 2010). One by one audience members stood and began to sing with a lone performer on stage in Maori language. I couldn’t fully comprehend what was happening, but I realised in that moment the performance was elevated, subverted from an act of audience consumption to a participatory ritual, a cultural affirmation of identity.

I was also reminded of a work titled Siamani Samoa performed at Carriageworks in 2015.[3] The premise of that performance was to acknowledge the ongoing impact of German colonialist administration from 1900-1914 as demonstrated on the island in a daily performance of a diverse repertoire of German and Viennese music by the Samoan police brass (marching) band.

As I rode into the car park of the venue to attend the final performance of Siamani Samoa I saw a large contingent of Pacific Islanders alight from several buses. I imagined it was one of the largest gatherings of Samoan people outside of Samoa. In this performance, as in Ponifasio’s TEMPEST: Without a Body, the audience members were active participants. The audience also sang along to certain songs and placed money in two designated collection plates to facilitate the band’s journey back to Samoa. When the show proper had finished, a call and response communiqué between those on stage and those in the audience extended, until an announcement was made that the venue was closing for the night.

I regularly experience this level of participation at Aboriginal events. This happens at the Garma Festival in the Northern Territory when the best performers are given money to send them home safely; when watching or participating in Torres Strait Islander performances and the best dancers are parodied or showered in scent, baby powder and spray deodorant; or when attending ‘Koori’[4] night preview performances of Bangarra Dance Theatre, hearing the whistles and calls to family and friends on stage from the audience when the dancers excel and excite. I have been the recipient of a guttural call to “go Aunty”[5] when my character has shown particular strength.

From Lucky to Ryuichi Fujimura’s How I Practice My Religion. This was also my second viewing of Ryuichi’s work. I first experienced How I Practice My Religion as part of an event curated by Readymade Works. I feel compelled to mention this because of the equally substantial impact and contribution to the development of contemporary works this small outfit, Readymade, produces for the independent dance sector.

The first time I saw Fujimura’s work I spoke of his subtle humour, which was heightened by his vocal delivery, reminding me of an anthropologist’s report.[6]

This time I was able to compare Fujimura’s work to Lartey’s and to frame How I Practice My Religion as an embodied document of the machinations of culture. Fujimura’s work speaks specifically to, and of, the independent contemporary dance community. As each movement characteristic was recited by Fujimura I felt my nerve endings spark to life. I felt the fullness of his abrupt stillness occurring in the middle of this work, disrupting the steady flow of movement which preceded it. I felt the pent up energy, the ache of anticipation, when the music stopped and Fujimura announced that he was, “still tasting (stillness)”. My mind raced to work out possibilities for engagement with the small step ladder brought on stage as Fujimura improvised with it. I wriggled as his body rolled.

The beauty of these two works, Lartey’s Full Circle and Fujimura’s How I Practice My Religion, operating side by side made me realise that I could be an active audience member by simply witnessing other audience members interact with the performer. These works enjoyed success because they were comprised of various levels of insider and outsider knowledge, rather than despite it.

[4] A name for Aboriginal people from NSW

[5] Whilst performing Briwyant in Bribane in 2012. To call someone Aunty is generally an acknowledgement of respect to an older person within the Aboriginal community.