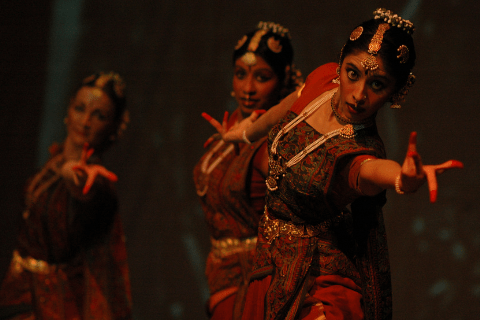 Why I make promises in print is beyond me. Alas no, I did not go online and do classes outside my cultural comfort zone as intended but I did stumble upon a link to Akram Kahn’s latest work which is streaming until September the 10th. Until the Lions is based on a singular character Amba found within the Mahābhārata, one of two ancient Hindu epics, the other being the Rāmāyaṇa. Akram’s work is adapted from author Karthika Naïr’s book Until the Lions: Echoes of the Mahābhārata.

I will not go into great detail about a Muslim Bangladeshi Englishman who loves Billy Elliot and also takes inspiration from Charlie Chaplin, Fred Astaire, Buster Keaton and Michael Jackson. A choreographer who in Until the Lions sourced materials from cultural lineages other than his own to include a Filipino fisher song, a war cry in Sanskrit, singing rhythmic chants in Basque and Old French as well as borrowing Italian and Punjab classical poetic rhythmic structures* because it’s 2020 and issues surrounding cultural appropriation have taken a turn for the absurd.

From Adele being called out for her choice of African head adornment recently, to the Sydney Opera House diversity policy asking us as makers to ask ourselves whether a story is ours to tell. Has the world gone mad? In this era of knee jerk reactive action I find myself continually asking, ‘How far is too far in this time of cultural correction?’ Can I wear an Indian print? Can I braid my hair in more than two rows? Can I tell a story that did not occur on my ancestral homelands, or did not occur at all? At this rate, pretty soon, I might not be able to eat a falafel.

I think I am experiencing deja vu because I distinctly remember stating in my last blog that if we can’t imagine ourselves outside our selves we inevitably lose our propensity for empathy. I also remember stating that making cross cultural work involves an opportunity for communication, beginning with simple conversations, which subsequently involves processes of mediation and negotiation until the unfamiliar become un- othered.

Akram Kahn’s Until the Lions did not disappoint. His work featured three dancers Ching- Ying Chien, Joy Alpuerto Ritter and Akram himself. The overall form reminded me of a solo I had seen at Riverside that Akram had choreographed on Akash Odedra titled In The Shadow Of Man. Like Odedra’s solo Kahn’s choreography had a visceral vocal component. Whereas in Odedra’s solo there were grunts, in Until the Lions it was a long call, repeated at several times throughout the show which imbued the work with an almost primal energy. I recall thinking that the choreography similarly included vocabulary not normally associated with Indian classical dance forms. But then again, what do I know, because the notes accompanying Odedra’s solo spoke of invoking an inner animal through the utilisation of classical Kathak rhythmic patterns to express those vocal sounds in combination with the dextrous isolations of his torso. This creative process was also evident in Until the Lions on a larger, but not less, intimate scale.

I thought maybe my blog could be about bingeing on full length dance productions. But no, seems I was artistically saturated after one and a half shows and the theme of cultural diversity and its visibility kept rearing its head.

This is how I landed with Lingalayam’s upcoming production titled Pancha Nadal premiering at Parramatta Riverside Theatre as part of its digital platform. The title takes its name from the five fundamental rhythmic patterns represented in beats of three (tisram), four (chatusram), five (khandam), seven (misram), and nine (sankeernam) which are utilised in multiple configurations in the music and dances of South India.

I was thinking, how appropriate that choreographer Anandavalli’s exacting choreography should be chosen to kick off Riverside’s entry into the digital dance world. Speaking to Anandavalli this morning she was adamant to express her gratitude to Riverside for choosing her, stating that it was probably because she is one of the longest serving artists to present her work at Riverside. Those of us who know Valli, know better. Lingalayam was chosen because of Anandavalli’s track record for delivering a consistent example of the best dance our city has to offer.

Valli is an innovator who has built a consistent following within the mainstream community. For many of us working with culturally and linguistically diverse dance practices, Anandavalli’s achievement, her mass appeal, is akin to the arts holy grail. And rightly so.

My first memory of Valli occurred while teaching a workshop in Penrith at the Joan Sutherland theatre. After finishing teaching my class I decided to participate in Valli’s. Bad move. Valli came up to me repeatedly to tell me my ring finger wasn’t bending, and when it was, my feet would lose their 180 outward rotation. Some would say I never had it to begin with, but on this morning I cranked those hips as far as they would go. When I had finally mastered my fingers and feet, my arms would inevitably droop and my knees would start to straighten. Moving my eyes within this extreme frame was another matter all together and tipped me over the edge of patience and sanity.

Years later Valli and I began a collaborative work about our respective cultures reference to the serpent. We came up with a simple narrative to begin our working relationship whereby an Aboriginal clever man summons the Rainbow Serpent via Wiradjuri song in order to end a long drought. The clever man then begins speaking in a foreign tongue (Tamil) and accidently summons the Indian snake goddess Nagabhushani.

What I learned from our collaborative experience is that Anandavalli, while open to new practices, is also very respectful of tradition. There were certain postures that were off limits to her dancers because they would compromise the integrity of her dance lineage. In a time where we are all about the reactionary breaking of long held tradition Anandavalli’s position was refreshing. Although this sometimes means an uninitiated audience is often unable to discern the difference between classical form and Valli’s subsequent individual artistic legacy.

Anandavalli was considered a child prodigy travelling the world over to perform and learning from three different gurus during her lifetime. While her choreographies are reflective of all three gurus, she is adamant that what she creates is not a fusion. Valli is adamant that each technical style must maintain its own integrity and that they may sit side by side within a choreography, even within a phrase, but they must not become watered down mixed versions of the original. This singular approach to choreography was initially carried over to our collaboration, although in places it was relaxed (just a tad). This unexpected restriction, although initially frustrating for this contemporary Indigenous dance maker whose practice is based on developing new vocabularies by a process of amalgamating western virtuosity (including extended lines and accessing/ transposing all levels in space) with Indigenous gestures and motifs, made for interesting and novel choreographic results, especially when creating partnering material.

With a cast of twelve Anandavalli’s company Lingalayam will perform four separate pieces within a full length format on Sunday the 20th of September at 5pm. We briefly spoke about the need for theatres to reopen and missing the associated buzz of energy connecting the audience to performer through dance in a live setting. Although Anandavalli relayed her joy at finally being able to invite friends the world over, to see this work. Be sure to tune in.

*sourced from Kathika Naïr article found on the above webpage.