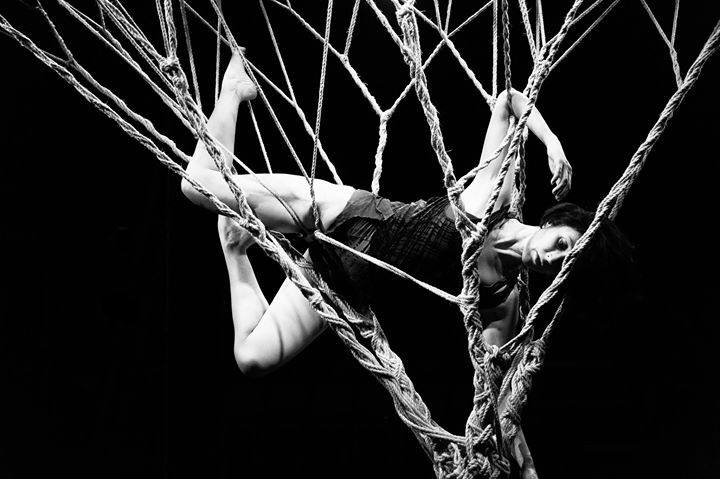 This blog represents yet another short series, dedicated to artistic otherness in two parts. It’s inspired by two solo performances and one cross or intercultural workshop (I can never decipher the difference between the two terms). By otherness I suppose I am referring to the colonialist or dominant gaze with which many (including myself), as experienced or educated contemporary dance audiences, appreciate a work.  I strongly feel Rakini Devi’s Urban Kali and Paloma Negra’s Sol, The Tree with no Leaves exist on the periphery of this view.

Rakini Devi’s Urban Kali represents the creative component of Devi’s PhD dissertation at University of Wollongong. Urban Kali is the result of a feminist exploration of the significance of the goddess Kali in her manifestations as both the destroyer and consort to Shiva in Hindu mythology and in correlation to the reality of the social position of women in India.

So much of this work I gleaned from the spoken text, peppering the performance in accompaniment to the video component, which made for compelling viewing. The text was presented in both prose and documentary formats. The video component gave the nod to designer Karl Ford’s and Devi’s shared love of the horror film genre.

Right from the beginning Devi’s work was a feast for the senses.  Its elaborate stage setting featured a cloistered section to the left of the stage covered in a curtain of sheer fabric and a small altar or free-standing sculpture to the right.  The peak of a large black conical netted sculpture was affixed to the ceiling. When lit it revealed several small skulls attached to numerous plaited umbilical cords, just left of centre stage.

Devi’s choreographic strength lay in intricate hand gestures, which were an amalgamation of classical Indian shapes, including the fanned fingers of her right hand. Devi’s electrifying hand vocabulary penetrated the pervading darkness on stage, mesmerising as her fingers caught the light in frenetic flickers.

Again and again Devi alternated from depictions of female mythological strength in comparison to a secular position of subjugation, borne of a tradition of misogyny.  The most disturbing feature were the details of the once-prevalent practice of female infanticide. The most compelling vignettes were captured in close-up, depicting strong images of bloodied hands in the shape of a womb and in a subsequent scene where Devi’s hands signified both the perpetrator and victim in ritual sacrifices of stranglings and suffocations, chokings and secret burials of shame.

It was with relief that we were afforded a reprieve as the last image projected appeared to allude to vengeance or reigning strength as Rakini, as goddess Kali, adorned herself in a regal orange lei (which suggests immortality).

A week later, as I walked into the dim light of Pact Theatre, I encountered a huge tree sculpture made from hemp rope, suspended from the ceiling. Designed by Garth Knight, its gnarled effect was achieved by a series of intricate knots, suggestive of elaborate bondage ceremonies, covering and radiating from a trunk with a skeleton made of metal. Paloma Negra’s Sol, The Tree with no Leaves is reflective of her interdisciplinary biography, which includes dance, aerial work, burlesque and Ninjitsu martial arts.

I remember a day a few years back when I was out with my mother and we bumped into Paloma in Martin Place, near the old GPO. After passing a few pleasantries back and forth, as we watched her retreating figure merge with the hustle and bustle of the inner city crowd, my mother exclaimed, ‘That is what a real dancer looks like.’ I was crushed and felt immensely inadequate as I proceeded to take inventory of my daggy garb.

Our clothes that day seemed to exemplify not only our sense of style but our measure as artists.

Like Devi, Paloma’s work was not wholly understood by me.  In the places of conceptual uncertainty I found spaces for personal meditation. For me ‘the tree with no leaves’ represented an ancestral tree, where generations of bodies of bone and blood reside, Negra’s work capturing and chronicling a snapshot of her place within her lineage.

Memorable moments from this work include the slowly dawning opening as Paloma came to life within the lace-like network of branches to emerge from its arboreal roots. Each time her body braced against the ropes a momentary impression was made on her skin, emphasising her burlesque roots. In yet another sequence, at what appeared as mortal decay, Negra’s body was broken into fragments as she jittered down the wall to traverse the floor. Inching downstage from an inverse position, with her upside-down head peeking through a dirty frame made by the backs of her thighs, her disjointed figure appeared like two draped wings of a strangely parted curtain. This imbued the work with a much appreciated surrealist quality which left me wanting more (of the same).

There were times in both works where I found aspects challenging. Devi’s staging assigned equal weight to set and video components en par with the live dance. Negra’s overall pacing, which seemed uniform despite her humorous interjections, also seemed out of place. Negra’s  light hearted characterisation occurred in stark contrast to the gravitas afforded in her opening.

In Devi’s case I discovered in myself the hypocrite. So often I have been urged to tone down my sets, which are busy as a result of embedding the act of preparing the dance ground for communication with my ancestors before each and every performance. The audience is not privy to my ritual. Like Negra I have an aesthetic which traverses both my real and staged worlds, which is reflective of my Aboriginal heritage and my working class neighbourhood (Dapto). Negra references her parental performance lineage in both program and the dance. Her sensibility attests to her Latin roots by exuding a particular Dionysian quality of intuitive unrestraint, even in this, one of Negra’s more conservative efforts.

The adherence to codes at odds with western convention, initially jarring but paving the way for innovation and possibility, is what I respect and admire from these two seasoned artists.

"FORM is the only organisation in Sydney representing and supporting this range of activity, which is inclusive for many dance artists. The breadth and depth of FORM's activities contributes to vibrant dance ecology across both Western Sydney and Sydney City."