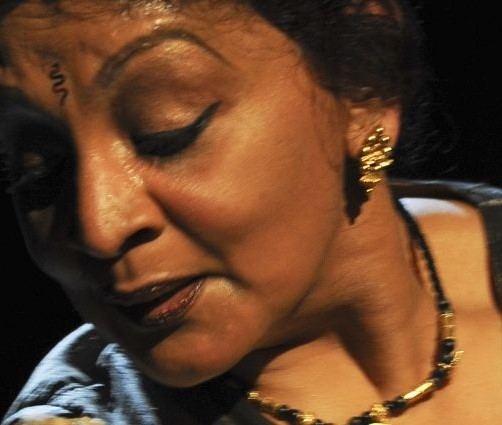 A lab and a work in development.

It’s official, I am a slacker. I have let a job ruminate in my belly for a little over a week. A week I don’t have, I might add, and now I literally have to pull my finger out and get it done.

Anyone would think this blog was about the art of procrastination but, no, it’s not. The work I’m developing (working title TALK TALK) is  theoretically designed to begin a debate about crosscultural and/or intercultural work.

Alright, so I’ve just completed a quick search and my virtual oracle has provided me with a wadload of sources that discuss the fundamental difference between the two terms, which get bandied about more than the rolls of elastoplast needed these days to physically attempt either an intercultural or a crosscultural dance endeavour.

A couple of weeks back I participated in an intercultural lab at Critical Path with the specific intention of working with the formidable Anandavalli. Like Madonna she only goes by and needs  one name.

This collaboration has been more than a year or two in the making. We had planned to initiate the development of a work (yet to be named but other than the one I am furiously procrastinating over) which draws on similarities between our beliefs and physical vocabularies and on which I believe we have made a significant and tangible beginning.

What became apparent whilst working with Anandavalli was a subtle shift from an intercultural to crosscultural process.

For starters, Anandavalli is a master of classical Indian dance forms Bharatha Natyum and Kuchipudi, while I am the creator of a continually augmented contemporary Australian Indigenous form. (Although Anandavalli is making significant contemporary innovation which may or may not be immediately recognised because seemingly small inroads take longer due to the huge impact and debate amongst the collective in which the forms originate and because of many western audiences’  failure to recognise such innovations.)

My training encompasses both western classical theatrical dance forms and several Australian Aboriginal and Torres Strait Islander identities, from communities taught in situ and on campus at NAISDA Dance College.

One thing both Anandavalli and I immediately established was a primary identification as part of a community to which we are answerable. This means that everything we communicate to each other is first considered in relationship to the communities we represent  before we share information amongst ourselves.

Valli established her desire to draw on a concept which involves shape shifting (I am sworn to secrecy so won’t divulge the particular entities involved at this point.) This was the easiest part. Next, Valli and I began a tentative conversation involving a rudimentary back and forth of shapes, sounds and rhythms. What was obvious from the beginning was my need to conduct a lot more research. Not only because Valli’s knowledge and repertoire is extensive but because of my responsibility to ‘contemporise’ material before sharing it with Valli.  My process requires me to utilise the rules of dance I have gleaned from a thirty-year exposure to various traditional forms and apply them to the scant knowledge I have accumulated about my own ancestry due to the impact of colonisation. This has included learning language from a man who teaches public workshops and learning kinship, lore and law through anthropological texts.

Let me make this clearer. I have learned specific dance coordinations, cadences and vocabularies that have emerged from specific terrains and, rather than simply copy, cut and paste this information, I have had to ask myself whether and how they might be applicable to my ancestral stomping grounds or those of the city I  inhabit or the theatre in which I will recreate my contemporary Dreamings.

Embodiment is a fluid and murky space in and of itself. When I improvise, the years of training emerge as an amorphous outpouring, a melange of everything I have accumulated over the years. This is how my body speaks. But when my body talks to you from the stage I have to be extra careful. I have to use a thesaurus of tactics because the scrutiny placed on me is singular, and tricky. Sometimes I ask myself why a place like NAISDA (my formative training institution, the National Aboriginal/Islander Skills Development Association College of Dance) exists if I am trained to flick dirt, crouch low and look at the stars from a certain angle, ingrained and trained for years, only to be told that my body is sometimes speaking taboos that I will be sanctioned for when replicating as a professional.

When I inevitably become overwhelmed by the complexity of navigating the rules developed specifically for Australian Indigenous content, I think of the alternatives, to either eschew that particular angle or to disregard its parameters. I realise that without those cultural confines my work would not come as easily or readily. Sounds ridiculous, I know, but it’s true. I have been guided to initiate broader and deeper conversations within my community because I am accountable and these rules of engagement with cultural material have provided both the content and structure for my creative output.

So watch this space for more tangible insight into the work yet to be named in collaboration with Anandavalli and for plenty serious TALK TALK as part of the 2018 lineup of Dance Bites in 2018.

P.S. A bit of shameless self -promotion for those interested, the aforementioned tentative, pre-first development of plenty serious TALK TALK will be shown at Critical Path as part of Readymade’s latest installment of Happy Hour on Saturday and Sunday, the 4th and 5th of November.