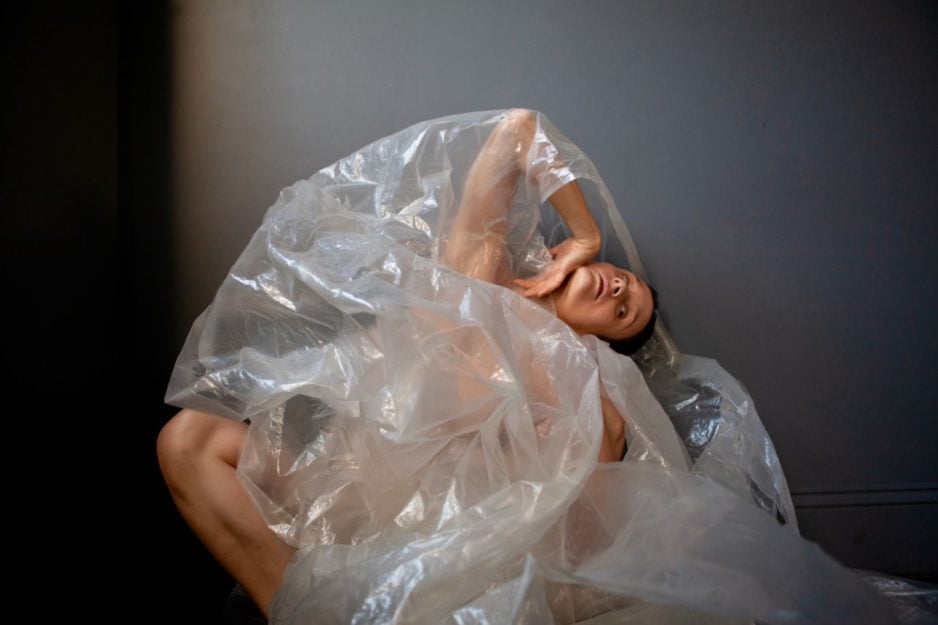 The exclamation Mea Culpa is used as an acknowledgement of one’s fault or error.  It’s an interesting entrée into a world replete with conundrums.  In accepting one’s part in a difficult problem or question, one can choose to either simply accept it or to find a way to address it.  This is a work that chooses the latter course, accepting the challenge of taking action, having posited the objectification of women’s bodies and colonisation of their minds through “the male gaze”, the choreographer grapples with the complexities of reclaiming female autonomy and independence in a world that is still (unfortunately) dominated by heterosexual male desire for aesthetic and sexual pleasure which relegates women to the status of objects.  The program note clearly states the intention of the work: “IT’s mission is to standardise their image, mechanise their plasticity and regulate their movement and behavioural patterns. But this trans-human female community decide to defy the system by re-coding their shaping.”

We enter the space to see five women of diverse body shapes, clothed in beige undergarments, held in stasis on their individual pedestals.  This immobility is an arresting image, and one that takes considerable discipline from each of the performers given that the plinths are in reality upturned milk crates.

When IT “the ever-present, (in)visible power” wheels in the female collaborator (in the Machiavellian sense of the word) these statues are commanded into life and under her increasingly strident and bizarre demands assuming ever more distorted ‘glamorous’ poses until they become a series of grotesques: colonised bodies without agency or autonomy.

The collaborator, this woman in the blue shimmering dress and stilettoes is the epitome of chic (even with a shower cap on her head) yet it is apparent that she is tragic, broken, and a parody of ‘woman’. It is a character powerfully inhabited by Cloé Fournier the choreographer of the work. The representation is a familiar trope – a female complicit in the subjugation of other women.  We’ve seen it embodied in the Aunts (particularly Aunt Lydia) in The Handmaid’s Tale, and closer to home by the women in federal politics whose proclamations that the government has no issue with women has spurned both an internal and public backlash. It’s also there in the dishevelled muttering and meanderings of ‘out of it’ drag queens wending their weary way home from Oxford street as sunrise approaches.

I have to say that I have never seen anyone manipulate a pair of stilettoes the way Ms Fournier does and still remain upright.  She teeters, she stumbles, she is awkward and appears in imminent danger of injuring herself but she has such dexterity in her ankles that she performs both pronation and supination without ever losing those damned shoes.

The central theme of the work is the quest for female autonomy and empowerment that breaks the power of the male gaze which has for so long objectified not only the female form but also the ways in which women think about themselves.

The problematics of such a quest are disarmingly put on display within the work.  Choreographically and dramaturgically there is little clarity about how this might happen apart from rejecting the status quo of male surveillance and commodification, and simply forging a new direction and stronger path that is female centred and controlled. While the nub of the matter is not explored or resolved, the necessity of the quest and the signposts along the way are clearly marked.  In a very real sense it is an adumbration or foreshadowing of a future event.

There is very little traditional virtuosic display in this work: no leaping and few high kicks, but this belies a deep commitment to a tightly knit ensemble of accomplished performers whose unrelenting persistence in forging a path toward self-actualisation is manifest in the complexity of the rhythmic footwork, which may to some seem simple, yet if one truly attends to it, is full of syncopation and dynamic cadence. It appears to be a hybrid of memory invoking French folk dance steps and structural frameworks conjoined with contemporary gestures.

As the women traverse the space hissing and muttering there is an inevitable forward motion, grounded and earthy, a dynamic organism that can only grow in strength and potency as others join them and that is the key to any significant social change: strength in solidarity and burgeoning numbers.  Indeed that was the image that kept on invading my consciousness as I thought about it over the coming days.

Frankie Clarke is to be applauded for her lighting design. It is subtle and does its job in revealing the unfolding narrative and the nuances of the shifting moods within the performance. It was also refreshing to hear a score that ranged from simple vocal harmonics to bold and driving rhythms and to know that its construction was made as part of the creative process rather than a completed work presented to the choreographer and dancers to react to.  Too often these ‘completed’ scores prescribe the narrative structure of the work rather than allowing the possibility of an organic unfolding of ideas in a truly collaborative process. Thank you James Brown.

Despite its flaws there is much to recommend in this work as it currently exists and I am excited by the idea that there is so much more to be revealed in a further development.  The hand of Vicki van Hout is apparent in this rendering and it seems to me her relationship as mentor and dramaturg brings a keen intelligence to the process.

I was there at the final performance and entered the foyer to witness an eager crowd who filled the theatre. I had tried to get to the opening performance but a night of football at Parramatta stadium put the kibosh on finding parking anywhere in the local area.  Feedback from friends who did manage to see the premiere spoke with such enthusiasm about the work and also the approbation and acclaim they showered on the cast at its conclusion.  I find it heartening to know that there is a generosity of spirit in the theatre going populace that acknowledges the seriousness of the subject, the rigor with which it was executed, and a commitment to passionate independent dance artists who, against considerable odds, still manage to persevere.  “Women Hold Up Half the Sky!”