It’s that time again. Keir Choreographic Awards time where eight finalists battle it out in a competitive whitened black box for more cash money to hopefully do it all over again in a stand- alone environment.

However, this Keir format differed from previous events in that the eight finalists were chosen up front and then subsequently split into two groups, whereby one group premiered at Dancehouse in Melbourne, while the other group premiered at Carriageworks in Sydney. Each group had a week-long season in one venue and then swapped venues for the second. This worked well because quite frankly the onslaught of eight subsequent performances in one go in the past, didn’t do either the artists, nor us, as audience members, any favours. This way with a few days to regroup in between both programs, we could really dine out on each piece, instead of sitting back in wonderment, trying to recapture any one thing of all that we’d seen.

I must confess from the get go that I’d seen half of the program via the online link and half in real time, in a theatre, where hardly anyone was wearing a mask because it’s not mandated anymore. So, definitely safer watching from home. Oh yeah, and I was dramaturg on one piece, so have in-house insight and personal bias regards that one. 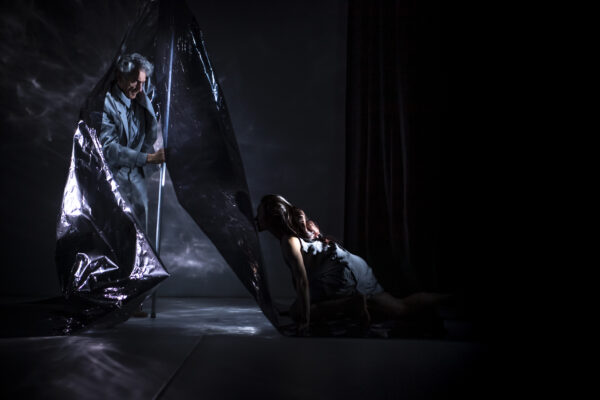 First up was ‘Evaporative Body / Multiplying Body’ involving a truly collaborative team including performers Alan Schacher and WeiZen Ho, sound artist Hirofumi Uchino, video and lighting designer Fausto Brusamolino, and live visual operator Alexander Gene Torney. This performance was the perfect opening to the Keir as it truly felt like a white box gallery experience. The embodied movement demonstrated states that were animated by the supporting visuals. A piece of slightly translucent reflective sheeting made the bodies shimmer and the shadow play against the black and then white layered backdrop made the bodies appear as if Ho and Schacher were apparitions.

I have a sneaking suspicion that the filmic medium from which I watched this performance enhanced the imagery. I was afforded the multiple viewing platforms from which I could fully appreciate all of the effects, as the editing produced what I would’ve executed manually by walking around the work to adjust my experience, as if in a gallery space. 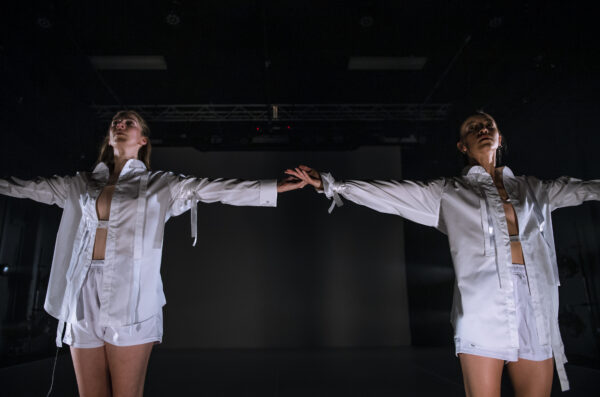 Tra Mi Dinh’s ‘The____’ was a well-executed dance exploration into the theme of performed endings. Here the white box premise was utilised literally as a frame to hold the concept in place, much like a black box experience.

This work reminded me of the last winning entrant in Angela Goh’s ‘Sky Blue Mythic’, which also used slightly deviated repetition to manufacture the effect of scrubbing back and forth through time. Unlike Goh, whose movement choices challenged the audience’s understanding of choreography, Tra Mi Dinh’s choreography celebrated the codified dancing body by comparison. I really appreciated the interplay between the gestural, seemingly non-danced sequences, with the highly virtuosic busy-ness of the dynamic enchainments, that only a well- trained dancer could manufacture, as both dynamics were allotted equal choreographic weight and therefore challenging, if only a little, the boundaries of dance.

This well executed work won the judges prize (sorry, spoiler alert for any of you who haven’t yet seen the program), which was a signifier that we have been starved of good ol’ fashioned dance within a dance work, even if there’s actually no old-fashioned dancing to be had in there.

Third up on the Vimeo online screening program was Alice Will Caroline’s ‘What’s Actually Happening‘. The opening sound score reminded me of a romantic black and white movie from the golden era, circa 1910 or so, when cinema had money to burn. Despite there being only one set piece in the metallic representation of a column and three performers on stage, the space felt fuller because of the shadows cast on the white cyclorama behind them, and strangely emptier because of the odd moments of disparity in spatial relationship to one another and to the lone set piece. This slightly off kilter feeling was punctuated by an end of time sound intrusion, breaking the opening choral vocal score with the long booming resonance from a fog horn, which gave the impression that a big ship was coming in to dock.

The combined lighting play against the cyclorama, doubling and trebling bodies with the set piece, altered the temporality by seeming to hang in the air, slightly behind a costume placed on the floor like a disowned shadow, transforming the space into a dreaming place. A layer of live performed absurdist curatorial text consolidated the artistic positioning as surrealist. 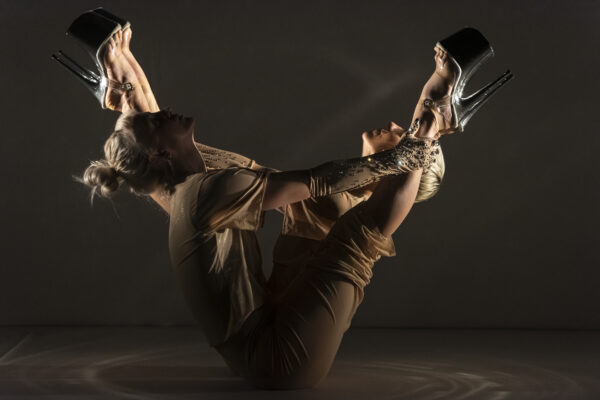 Jenni Large rounded out the first four with her work titled ‘Wet Hard‘ which began in protracted stillness. When she and partner Amber McCartney did begin to move I quickly jotted down my imaginings. Dressed in their outrageously fabulous costumes, consisting of loosely beige stockinged bodies atop chunky metallic six inch heels, I envisaged slowly spilling quicksilver, emphasised through slow crawls and upended pedalling motions to sharp culinary implements wielded by either butchers (or maniacs) when precariously balancing in mirrored jack knifed positions, to the broken shards of looking glasses offering the illusion of a thousand tiny refracted facets, and lastly as circuits firing along an information freeway into the ether.

Then when I read the program notes my brain immediately integrated the intended female aspect associated with heels. What I thought was elemental became sexualised. The evolutionary aspect which led me to water was then reduced to a wet t-shirt competition. Personally, I preferred it when the costumes of potential exploitation were subverted by my imaginative prompting to highlight the fundamental building blocks of life.

Ah, but the power of simply standing in the shoes as the lights died made me forget all that and just stare at those platforms in amazement that anything could so gracefully be achieved. BTW Large won as the well deserved audience favourite. 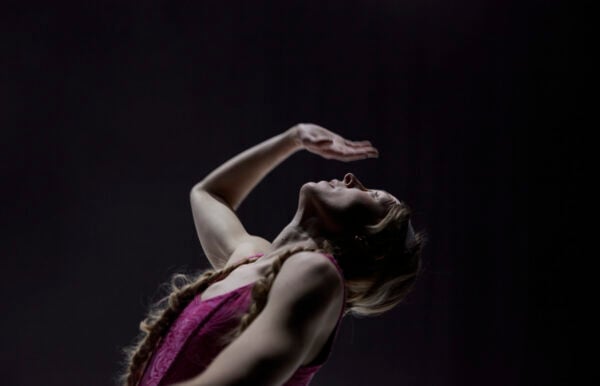 The second group was headed by Rebecca Jensen’s ‘Slip’ and again I thought she and her sound performance based artist collaborator Aviva Endean were a good choice to open the program. This piece also played with temporality as the composer acted predominantly as foley artist working initially in sync with Jensen and then increasingly out of sync with her. This manipulation of sound and timing produced several comedic opportunities which we, the audience grabbed, revealing how starved we are for the chance to chuckle in the company of others. The aural slippages intended to make us think about “acts of delay, deferral and doubt” certainly succeeded. Although the performative aspect of the sound dominated, I found myself watching and appreciating Endean’s authentic movement repertory, only glancing back to Jensen to reference the sound effects, such was the novelty of the piece. Not that that’s a negative indictment on Jensen’s work. Not at all. 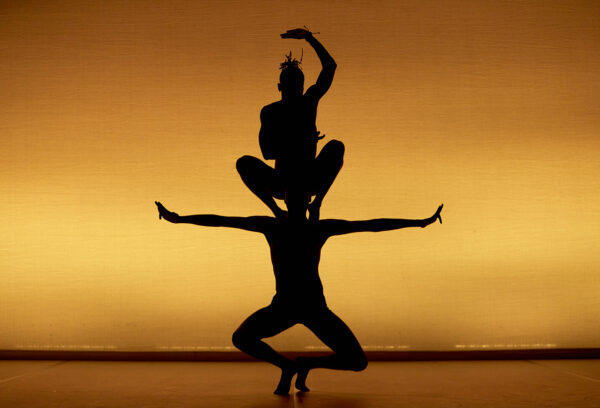 Lucky Lartey made an earnest contribution pairing up with Vishnu Arunasalam, in his piece titled ‘Exoticism’. I confess I have insight into Lartey’s practice also as I have mentored him in the past. Lartey has developed a digital media practice which melds optical illusion through the usage of geometric patterns produced with objects and bodies, which ‘Exoticism’ was exploring. This work, of all within the program, works best in both video and true white box environment as the time needed to let the work unfold felt truncated in a live 20 minute performative format. I wanted to see more images made with electrical tape on the wooden whiteboard. I could also imagine the bodies being entangled by the tape over a much longer duration. Perhaps this work could’ve occurred in instalments in the foyer as people entered, took a break and upon leaving the building. That would’ve been a better use of Carriageworks and the ridiculously tight confines of the competition. Free it up I say! 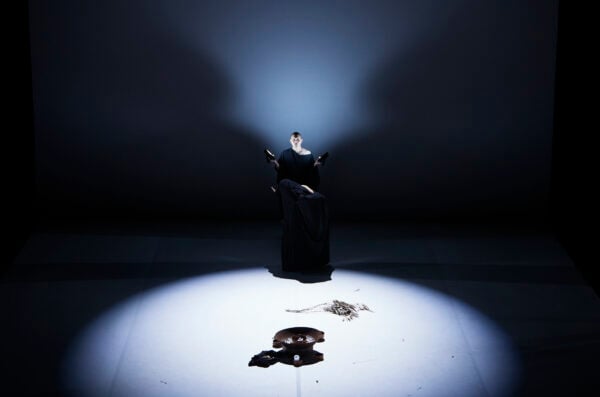 As Below, So Above, Joshua Pether – Photo by Zan Wimberley

I also know Joshua Pether from past Aboriginal artist workshops and was surprised to see his Keir piece titled, ‘As Below, So Above’. In Tasmania we had been briefly paired up in an exercise, to imagine an immersive installation. What we came up with was a horrific boat trip out to an island whereby the tourist participants became potential shark fodder.

I also saw a work of Pether’s in New York at PS122 titled ‘Jupiter Orbiting’, featuring a plastic set filled with toys of lurid hues, which tackled the decay left after trauma and loss. It was a surprisingly jaunty offering. So, needless to say, I was surprised yet again upon experiencing ‘As Below, So Above’ which, performed as a ceremony, was sombre by comparison. I was particularly taken by the dancer Daisy Sanders who metamorphosed into a dark enigmatic mass, as her robe was arranged to envelop her whole body and she proceeded to writhe in a series of undisclosed shapes across the floor. It was as if she was indeed conjured from below by the sounds produced by the combined efforts of Josten Myburgh and Sage Pbbbt, one of which played a brass instrument, while the other performed throat singing. 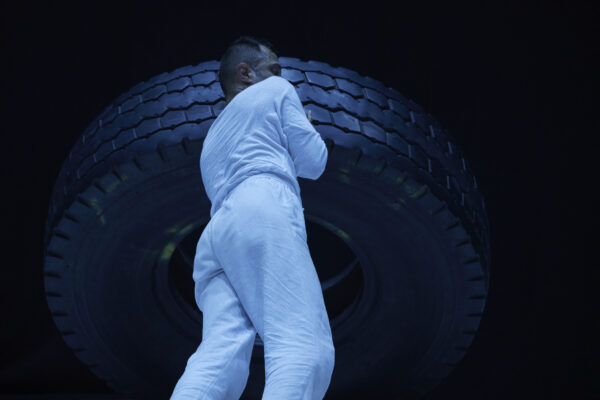 Lastly was Raghav Handa’s solo piece titled ‘Follies of God’. Again, this represented an earnest exploration into the seduction of war using the sacred text of Bhagavad Gita as inspiration.

All right, I was dramaturg on Handa’s work so can’t speak to or about it without gushing with pride for the inroads Handa has made as a maker and performer, so I will just dedicate a couple of sentences to our relationship which has spanned almost twenty years now. When he came to me he simply wanted to dance. He was fresh out of high school, and for years he learned Australian Indigenous contemporary dance from me until he could afford other training. At our performances they would ask what clan he was from and he would reply with his hometown in India. To see him draw on his cultural knowledge using some of the methods and skills he gathered while working with me makes this work special in respect to the application of Indigenous principles across cultures, and as an Indian artist working to represent his family as part of an Australian Indian diaspora.

Phew. Maybe this was better read in instalments. So on that note… no room for any more. Until next time.