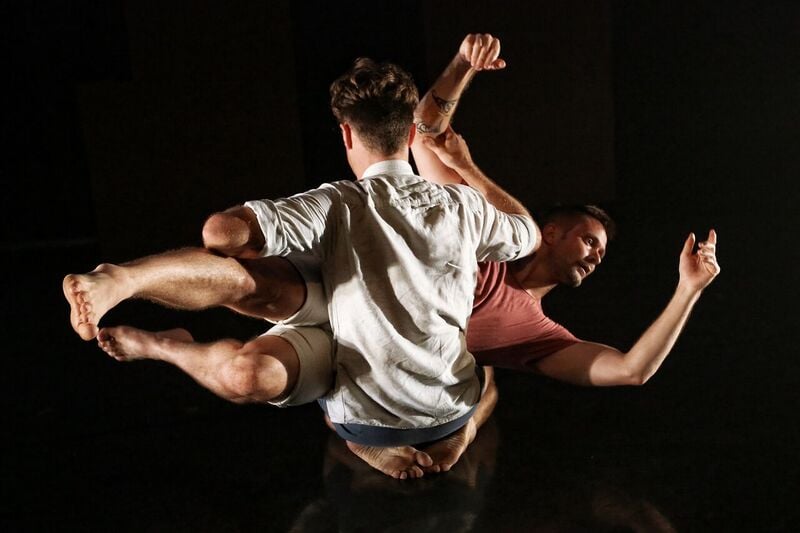 Two men sit facing one another as we fill the theatre for Craig Bary’s In Difference. The stage is black and I don’t look for the bits and pieces that might give me a clue to the impending action.

They are still as the house lights dim and two shafts of light train down on them from the upper corners. They are stripped bare of seeming artifice. Timothy Ohl starts to blink in increasingly rapid succession and I become annoyed. Why? The corners of his mouth make a comical downward turn, like a topsy-turvy clown’s sneer and I don’t know (what to think). The metamorphosis is slow enough for me to almost crawl inside his growing sadness. Meanwhile Josh Thompson takes inventory of his body with soft hands that skim his skin, covering more ground, whilst his limbs outstretch in arousal.

The two climax in almost simultaneous release; one as the result of an emotional catharsis, the other the result of the little death. I know these guys, in the foyer afterward they are referred to as legends. They are definitely both one half of two dancing power couples. So I know which one is ‘straight’ and which one is ‘gay’. It taints my reading of this opening gambit. Why is choreographer Craig Bary playing up to the stereotype that dictates hetero relationships are driven by emotion while male homosexual relationships are primarily about the sex? I do know that this simple quotidian gestural vignette signified a promising start. I was intrigued.

These guys are some of the best dancers Australia has to offer right now. They are in that place where they are able to make every move an addiction to observe, with the perfect blend of mature artistry to match. My eyes ate up the longer traditional partner duos, starting with Ohl and Kristina Chan, who initiates the coupling by placing a calming hand on an agitated Ohl, only to ‘catch it’ in contagion before both bodies move in waves, as alternate receptors morphing into one organism. It was satisfying to watch Chan’s body acquiesce, sinking from the chest out through the middle of her back before rippling and spiralling, twisting and weaving. In comparison Thomson and Bary held each other in successive suspension. The metaphoric interpretation clear here, their shared experience lived closer to the edge.

I appreciated the deftness with which Chan’s hands interrupted a tentative engagement to reinstate a stereotypical sexual agenda imposed by outsiders.

Perhaps my favoured juncture occurred between Ohl and Thompson. It was rough and tumble, bodies thrown at and away from each other. I saw a bromance unfold and for a fleeting moment something maybe a little messier, harder to categorise. The rugby league football scandals of group sex flashed before me. An inexplicable shared physical bonding not confined or defined by sexual orientation. And then it was over.

I was reminded of Sue Healey’s Suite Slipped,  featuring dances and behaviours of the court, and of performer Phillip Adam’s sly lascivious ruffling of his unknowing partner’s hemline. Perhaps I was the baroque type melody. I remember how the smallest physical gesture made the largest impact. A violation performed on the oblivious.

This darker element was satisfying to watch and I questioned whether it was due to some latent voyeurism on my behalf. Then I thought of Lloyd Newson’s John  which was a very visceral physical example of verbatim theatre, a first person account of a turbulent life lived. As we hear and become exposed to lives lived outside our own familiar routines, they become less the ‘other’ and just another one of us.

I think I heard Senator Penny Wong in the recorded commentary reassuring us that the sky would not fall and that ‘three year olds would still eat too much icecream’, or some such observation of the consequences to our long overdue implementation of equal marriage rights. She made us laugh and see the ridiculous futility in holding off what will one day become inevitable.

The set was simple and effective in framing the action, and consolidated through uncluttered lighting which aided in directing and dividing the space. Kudos to Bary and the team for seeing the work through to realisation. I want to see Straight Laced. I am particularly curious to see further exploration into the conceptual statements which punctuated this work and how they might more readily influence the exemplary physical virtuosity of Bary’s embodied vocabulary.