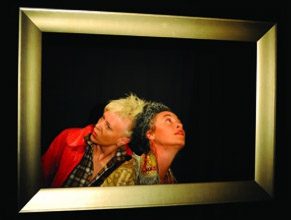 Tess de Quincey’s new work, FRAMED. Created and performed in collaboration with dancer/choreographer Victoria Hunt, the piece is part of de Quincey’s ongoing “Embrace” series. Initiated by de Quincey and her company DeQuincey Co in 2003, the “Embrace” series builds on a long-term exchange between Australian and Indian artists. It explores the ancient Indian treatise on artistic practice, the Natyasastra, from the fundament of BodyWeather, a dance-performance practice founded in Japan that underpins DeQuincey Co’s work.

Last week I caught up with de Quincey for a short interview:

Tess, FRAMED is the most recent instalment in your “Embrace” series that started during a residency you and DeQuincey Co did in Kolkata in 2003. What was the initial inspiration for the series?

In 2001, I was visiting my friend Munia in Kolkata (Calcutta). She is a dance ethnologist and she’s got this great library, and I plucked a couple of books out of the library and started reading them on her balcony. One of them was about the Natyasastra. It’s this tiny little book and as I was reading it, I thought: “That’s amazing. This is like BodyWeather!” And what is so fascinating is that I realised that the Natyasastra dripped down from India over to China down through Korea, into Japan. BodyWeather, of course, is a slow drip feed. And I’ve been the recipient of the Natyasastra through the BodyWeather practice. Just in a completely different way.

What was the next step?

My whole thing about doing that residency in 2003 was about trying to see what the relationship was between BodyWeather and the Natyasastra. I started to think: “Am I just imagining this?” And there are indeed many elements that are incredibly different. But at the same time there are base principles that are very similar. And all of that is around the idea of the transformative body.

What was it in particular that interested you in exploring the Natyasastra from a BodyWeather point of view?

One of the interesting aspects for me was the fact that emotion is such a “hot point” in Indian work, in comparison to the Japanese which is much more cool. The Indian work is always much “hotter” and much more emotive. So I found myself concentrating very quickly on the chapters within the Natyasastra that were about emotions and the idea that there are eight emotional states, which is very debatable of course. Modern psychologists don’t buy into that. But that’s part of the interest, also because in BodyWeather we really don’t deal with emotions directly at all, generally.

So, how did your interest in the emotional states of the Natyasastra first manifest itself in performance?

There was a conference in Kolkata in 2006. It was Peter [Dr. Peter Snow from Monash University who gave a lecture about the “Embrace “ series], myself and Shantanu [Shantanu Bose, DeQuincey Co’s Indian collaborator, Director of Monirath Theatre] and we did an improvisation together. And I said to them: “Let’s do it on the eight emotional states of the Natyasastra.” That was the first time we did an improvisation just on the emotions and I thought: “This is great!”

That night we went to the Bengal Club, which is the epicentre of the Raj. In the club you’ve got these thick gold frames, up the staircase, with heavy, dark mahogany wood, and these big guys are sitting there enthroned in these gilt frames, and I had the idea: “We should put the emotions in the frame!” That’s where it all started. For years, I had been fascinated by the concept of framing within a performance. I actually think that performance is all about framing. But the “leap into the frame” occurred that night at the Bengal Club.

The result was GUILT FRAME, a duet with Peter Snow, which you performed inside a real frame. It was presented at Sydney Theatre Company in 2008 and at La Mama Theatre in Melbourne in 2009. When did you decide to do another piece within the frame?

Pretty quickly actually. I felt that we were onto something exciting. Peter has a background as an actor though, and I really wanted to also explore it from the perspective of two BodyWeather performers and do it as a purist BodyWeather piece. FRAMED is about doing just that.

For FRAMED, you are collaborating with Victoria Hunt. Your working history together spans 13 years but this is actually your first duet?

So what would you say is the difference between the piece you did with Peter and this one with Victoria?

The underlying score is the same emotions, we’ve kept them in the same order but we’ve started from a different positioning, trying to explore it in a different way. So it feels quite different, it’s a new piece, but we’ve kept the same soundtrack because I don’t think we can ever get a better soundtrack. The sound is fantastic. It’s Michael Toisuta’s composition Homage to Ligeti, which takes its inspiration from Györgi Ligeti’s famous Poème Symphonique for 100 Metronomes. I thought about if we should try and use another soundtrack but I just can’t imagine anything that would fit so perfectly.

And in terms of staging? What about the frame, for example?

As for the “Embrace” series, I assume it’s not going to finish with FRAMED?

Is there a new instalment planned at this stage?

It’s planned to the extent that we’ve got it chalked up but we just don’t know how to find the money for it. What I’ve wanted to do for some time is to do an installation with pre-recorded video, involving four or five performers. I want to explore male relationships, female relationships, cross age relationships and more dense relationships of many. There is one I want to do called Portraits which is a video piece. There will be an empty frame and audiences will be invited to come in and fill out that frame.

FRAMED is on 8, 10 – 11 August at Lennox Theatre, Parramatta Riverside. On 9 August, there will be the opportunity to participate in FORM’s Learn the Repertoire, See the Show program. The workshop starts at 10am followed by a matinee performance of FRAMED plus a Q&A at 12.30pm.