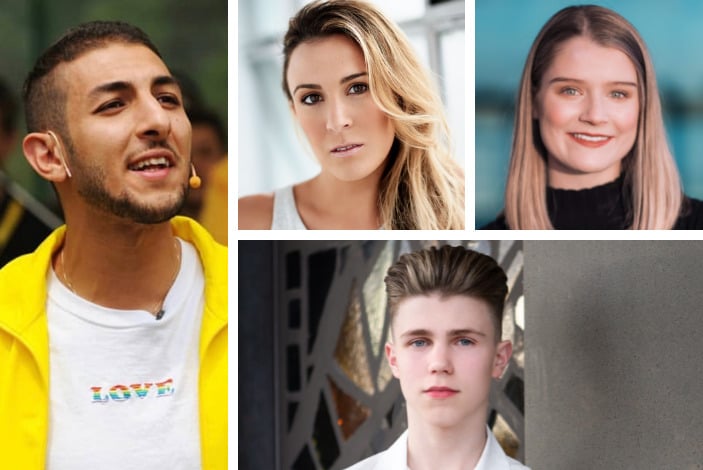 Enter the worlds of Braveheart and Riverdance! With remarkable honesty and humility in view of their international achievements, two-time Irish dance world champion, Liam Costello, contemporary Highland dancer and emerging choreographer Sabrina Muszynski, with leading  Irish and tap dancer, Peta Anderson, share the highs and lows of competitive “sports” that have taken them from the NSW  Northern Rivers to Edinburgh, Western Sydney to London and New York.

Liam Costello has been dancing since the age of six at McGahan Lees Creer Irish Dance School and has achieved many accomplishments throughout his young dance career. Liam trains between London and Sydney and is a 10 x NSW State Champion as well as a 7 x Australian National Champion. After much hard work and dedication, Liam achieved many other international titles all over the world including being crowned World Champion in Glasgow 2018 and Greensboro 2019. As well as Irish, Liam has also been training in all other styles of dance since the age of five at Carlingford School of Dance and is currently continuing his training in the Performing Arts course at Brent Street. Liam also has extensive experience as a professional dancer, completing other Irish dance tours such as A Taste of Ireland in 2018 through to 2020 and is so looking forward to joining the Eireborne team on a nationwide tour in 2021.

Peta Anderson started dancing at the age of three in Sydney, where she attended the McDonald College of the arts. After finishing high school she went on to complete a diploma in performing arts at “Dance world studios” Melbourne. Peta went on to tour with “The Rhythms of Ireland” around Australia and New Zealand straight after finishing her diploma which led her to perform with “Dance of Desire” in China. Peta then appeared on Ireland’s “RTE” TV program “Dance off” where she was chosen to perform as principal dancer in “Noctu”, which went on to perform in New York on Broadway, gaining 2 drama desk award nominations. Peta then went on to perform in Riverdance between 2011 and 2015, travelling all over the world. Back in Sydney Peta was cast in the role of “Lola”in the Kermond creative production of “Spiegle’esque” which has been performed all around Australia. Peta now resides in Sydney where she is choreographing/producing and starring in “Eireborne”, a tribute to everything Ireland has brought to the world in both music and dance.  Peta has a growing reputation as a choreographer. She choreographed the 2018 “Bulgari” launch in Sydney and is on board to choreograph a new show featuring “The drummer Queens” directed and created by both Nigel Turner-Carroll and Joe Accaria.  Peta is recognised worldwide as a “Capezio” athlete and was named in the top 30 most inspirational athletes of 2017 to recognise 130 years of the “Capezio” brand.  Peta is on the faculty of the “Australian Tap festival”, the “London Tap intensive” and “UK tap festival” (2018/2019). She is a co-founder of the Australian Tap Dance Company to be launched late 2021 at Riverside Theatres.

Sabrina Muszynski grew up in Alstonville, NSW, before moving to Sydney to finish her final school years at The McDonald College. She went onto studying at the Academy of Music and Performing Arts in Sydney. She completed a Bachelor of Dance, majoring in Contemporary Dance Performance. Sabrina was one of the dancers selected to perform in ENCOUNTER, directed by Emma Saunders, commissioned and produced by FORM Dance Projects for the Sydney Festival, 2020. She continued being mentored by Emma Saunders in the WE ARE HERE Company Curated Program, consolidating new small solo works in a collaborative and intimate environment. Sabrina is dance company member in award-winning, Bonnie Curtis Projects. Sabrina created and performed her original solo work with the company in (un)bound, as part of March Dance festival 2021.  Sabrina is also a Scottish highland dancer. She has performed in Australia and overseas with the Ozscot Australian Highland Dancing team, directed by Cheryl Roach OAM, in Scotland, Switzerland, United States and South Africa. Sabrina has also performed in Russia with the Spasskaya Tower International Highland Dancing team. Sabrina is currently completing a Master of Teaching (Secondary) specialising in Dance and Drama at Excelsia College.