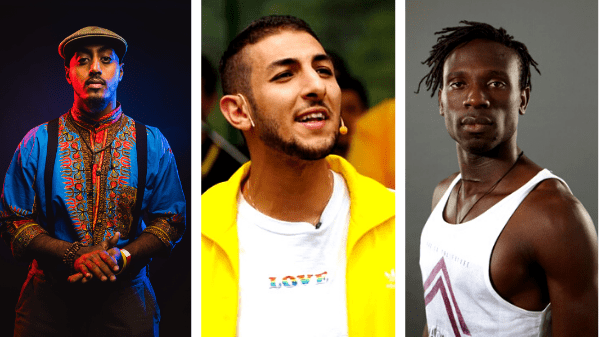 Contemporary African choreographer Lucky Lartey from Ghana and Award Winning hip hop artist Azzam Mohamed from Sudan share their love of hip hop, how dance has transformed their lives and the values that made them embrace an artistic path… and earn a Guinness world record on the way.

Lucky Lartey is a Sydney-based dancer and choreographer originally from Ghana, West Africa. Lartey’s work draws on his traditional culture of rhythm and dance as well as his understanding of contemporary movement practices. Lucky’s dance and choreographic practice looks for ways to negotiate what it means to draw on a rich history of traditional dance while innovating within a contemporary context. His methodology for developing dance work focuses on the collaboration between live percussion music and movement and is often informed by themes of social justice and the reinvigoration of past cultural forms such as cultural games and social activities.  Lartey’s key interest areas include: intercultural work and collaboration; exploring notions of what is contemporary and traditional movement practice; community cultural development; exploring his identity as a West African producing work in a contemporary context; and exploring opportunities to collaborate, present work and teach internationally. In 2019, Lucky premiered his solo work Full Circle as part of FORM’s Dance Bites seasons at Riverside Theatres in Parramatta. He currently works on a choreo/photographic project focused on dance and architecture.

From Sudan, Azzam Mohamed has trained in traditional and cultural dance as well as Hip Hop, Popping and House street dance styles. Azzam has taught, competed in and judged dance events around the world including: Malaysia Got HipHop (Kuala Lumpur, 2017); The Hip Hop Deal St. One (Singapore, 2018), Soul Sessions (Oslo, Norway 2019); and in Sydney, Melbourne, Perth and regional NSW. He is founder of Can You Afro? which introduces African dance and culture to the broader community. He is the 2019 Winner of Destructive Steps, Australia’s largest street dance competition; 2019 Winner of Hip Hop Showdown in Sydney; featured in the Top 16 in three categories at Soul Sessions 2019 in Oslo; and 2017 Winner of The Judgement Day International Dance Competition in Malaysia. Azzam is a member of Riddim Nation dance crew, founded from Western Sydney. In 2019 Azzam and Riddim Nation were invited by choreographer, Nick Power, to develop and perform Two Crews, in collaboration with Paris-based hip hop crew, Lady Rocks. He is currently in early development of a solo work, which will be shown at ReadyMade Works in Sydney later this year.