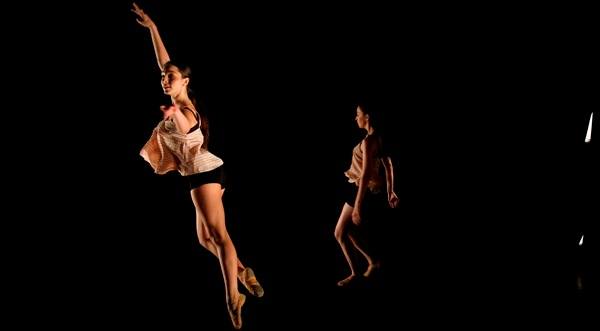 From the moment I sat down to watch the final nights performance of Fast+Fresh Dance at Riverside Theatre, I was transported back to my youth. Back to days of public performances, choreographed to hits of the 70’s, played out in the front yard, dodging potholes and accumulating grass stains.

It is the sheer unbridled joy and earnest need to communicate through movement, to see and hear immediate appreciation, from the first time you feel the power of the body; through endless shapes and patterns, that draws you in and hooks some for life.

Saturday’s final showcase did not disappoint.

I made it just in time to catch the first item, which won the Audience Choice Award. A hip hop number with four in the crew, two girls and two guys, led by the choreographer of the piece, Leif Aquino. He possessed a great fiesty energy, and an intuitive knowledge of how to best utilise each members strengths. It was fitting he was awarded the Bangarra Dance Theatre secondment.

Maddison Faye Weiley took Best Female Dancer. She was on fire; her transitions into the floor proceeded by fearless aerial work. This girl exuded raw power and control from start to finish.

Nicholas Tredrea was voted Best Male Dancer, opening with a very sharp gestural phrase of macabre whimsy, transporting me into a surreal other world and back again, via short sharp mechanical precision, growing to whole body daring and closing as it began. This was his own choreographic offering to mixed musical accompaniment, starting and finishing with Never Grow Up, by Walt Disney.

Zachary Lopez won both Best Solo and Most Outstanding Choreography for his work Armygdala. His movement language was idiosyncratic, quirky, curiously heartfelt and compelling, containing perfectly balanced vocabularies of the pedestrian and highly virtuosic.

Best Group went to a darkly compelling work called What Is Power? The dancers committed to this work of undeniable intensity, choreographed by dancer Mikaela Smith.

Linda Gamblin, head of the Pre-Professional Year at Sydney Dance Company, was on hand to award not two, but four young performers with an experience with SDC. Dancers Madeleine Skippen and Amelia Rosek were awarded a secondment. Dazzled by the overwhelming talent, Linda also awarded Michael Northey and Alexandria Panetta an invitation to a week with Pre-Professional Year.

It is a rare privilege for an audience to witness such a variety of experience, subject matter, genre and approach to dance; providing a snapshot for a predicted future of dance. MC Dane Ropa accurately described Fast+Fresh Dance as a special opportunity for the dancers to network with each other and be exposed to the business side of theatre, guided and judged by an exemplary professional team including; Annette McLernon, Carl Sciberras, Anton, Marko Panzic, Caroline Baum, Linda Gamblin, Rosslyn Wythes, Sonya Pascolini and Brooke Shelton.

To see images of the Fast+Fresh Final click here