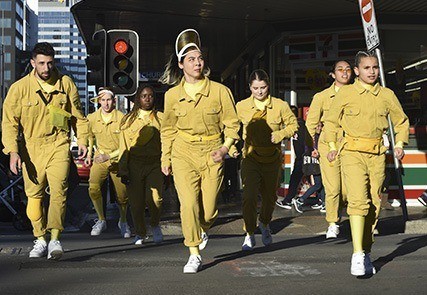 G’day and welcome to 2020. Let’s face it it’s looking pretty frightening right now. I mean the haze is so thick here in Sydney these days I don’t know if I’m starring in my own feature film and they’ve rubbed some Vaseline on the lens to take the aged edge off me and my immediate surrounds. So why the bloody hell would I be asking you to come to Parra to sit outdoors and encounter the sublime interaction between the next generations’ leaders encounter and animate a well worn park just a heart beat away from the river of eels?

Because FORM Dance Projects has conceived, realised and epitomised the zeitgeist in this one event with two names PRELUDE and ENCOUNTER. That’s why. I was able to take a quick squiz in advance last night and  here’s what I experienced.

In PRELUDE I witnessed a polyrhythmic pulse, expressed through idiosyncratic embodiments from all points of the globe, converge in a picturesque pagoda, decked out with a newly sprung floor. Beginning with contemporary Aboriginal dances performed by all female group Jannawi, who were accompanied by a recording of Matthew Doyle, singing in the local Darug language the women processed from the main stage to the heritage listed shelter.

This impromptu venue perfectly amplified the feet of flamenco dancer Pepa Molina as her heels beat an impassioned tattoo to the haunting accompaniment of singer Antonio Soria and guitarist Paco Lara.The slender columns framed Bharatanatyam dancer Aruna Gandhi’s body like a sepia photograph (obviously without the sepia) somehow managing to emphasise the intricate gestural nuances of her dance. From her eyes which made their direct gaze from alternating corners in correlation with the upturned tilt of her chin, to the gentle tinkle from the bells adorning her ankles as her feet punctuated the floor. The pagoda then became a pedestal from which dancer Feras Shaheen’s  mother, Mago Husari Shaheen, called to us in Arabic before dancing the dabke with her son. FORM Dance director Annette McLernon informed me that this was the first time Feras and his mother had performed together. I couldn’t help but feel a tad jealous that this inter-generational passing on of embodied knowledge was possible.

At the feet of the pagoda there assembled group Pacific Dreamz from the Cook Islands with a mother lode of drummers. Man, I don’t know what it is, but a posse of drummers going hammer and tongs with such precision and unbridled energy is both uplifting and infectious. The dance featured a speedy shake- a-leg from the young men and a mesmerising rolling of the hips from the women, accentuated by the grass bustles lining the top of their skirts. Their performance instigated a feeling as if  I was at a large extended family gathering, due to their almost informal presentation style, coupled with a close proximity of the action to the audience.

We were also treated to a preview of the Dance Makers Collective’s new work Rivoli, which will premiere in the Granville town hall next week, in a short playful partner dance featuring Katina Olsen and Carl Sciberras. It was definitely a transportation back in time to when social dancing involved couples touching. I often lament that I wasn’t living in that era and this dance had the power to pull at that familiar fancy.

Twins Frank and Paul Barbara reprised their comedy stylings in the dance that won them best duo at Sharp Short Dance only weeks ago. Soloist Billy Keohavong, also a previous winner of Sharp Short Dance, moved with sensuous ease, his slippery transitions into and out of the floor punctuated by tiny body jolts in combat boots.

From PRELUDE to the main event. Like I said, ENCOUNTER, choreographed by Emma Saunders, serves as a timely reminder that (like retirement) we often take our easy access to and with the outdoors for granted.

The opening  and  intermittent framing prose written by Felicity Castagna, whose observations were delivered with a particular rhythmic style powerfully performed by slam poet and performer Pola Fanous, pit the natural beauty of Parramatta against its morphing superimposed human stamp. Nowhere was this more poignantly expressed than in the opening lines,

“You’re in a place where the eels lay down and the cars light up. Where the Maccas sign is the biggest moon in the sky. It’s Parramatta. Summertime.”

I loved these opening sentiments so much I find myself repeating those four sentences like a mantra. The images conjured a space full of possibility. Then, as the music started, a gang of yellow clad youth emerged from the din of the gunned motors of two yellow sports cars. And they were off……

Bodies assembled in front of the 50-strong Western Sydney Youth Orchestra, conducted by James Pensini who seemed to intuit the high voltage exuberant energy only the young and/or crazed can muster. They began, I found out, as they meant to go on.

From the opening scene, which featured bodies thrashing as if they were infused with volts of electricity, against a backdrop of complex physical uniformity. The mass receded and Feras (re)emerged (remember his mum) in an extended crumping solo which lasted the length of a whole poem. By the end I was tense and exhausted, so I can only imagine how he must’ve felt.

The mass then converged on us, the audience.

Now that I have piqued your curiosity, I think I have to leave my blow by blow account there, or else I will spoil it for you.

I can say I became familiarised with each performer, their sensibilities and their eclectic dance history, from the high energy of flamenco, to the irrepressible buoyancy of highland dance, to the subtle wave like undulation of the hula, I searched for them as each vignette unfolded.

I became aware of the music as a particular carnivalesque piece with its quirky percussion unfolded. McLernon  informed me that the music was composed, by Amanda Brown of The Go-Betweens along with Jodi Phillis of The Clouds, within the first development of this year-long process. The music was imbued with the fullness only an orchestra can muster and with a sense of play, mixed with sounds that break through the harmonious cacophony to tip it slightly off kilter, inciting a sense of wonder and curiosity.

McLernon also informed me that ENCOUNTER enjoyed its first presentation in Four Winds Festival in Bermagui as ENCOUNTER SOUTH where the second half of the dancing company from FLING Physical Theatre reside in the  fire-ridden Bega valley. Under the associate directorship of Rob McCredie it was with great difficulty and through sheer perseverance that the eight performers from FLING actually made it in time for these performances, proving yet again the current climatic conditions have far reaching consequences.

Emma Saunders informed me that one of the movement scores was built around a connection to place and that it was influenced by the techniques of Belgian choreographer Anne Teresa de Keersmaeker, with a Fondue Set twist of course. I mean, what would an Emma Saunders piece be without her equally unique performative history leaving its mark? After google-searching the De Keersmaeker method,  I discovered she was also a musician, hence her interest in creating a methodology that explored both the relationship of movement to musical structure, whilst also juxtaposing formal dance techniques against expressive gestural vocabularies. McCredie shared his gratitude stating, “It is very rare for young performers in regional areas to  access this type of exposure.”

I would be remiss if I didn’t mention the visual impact of David Capra’s design. Inspired by Emma Saunders’ fascination with the bright yellow Adidas tracksuits, Capra created a layered uniform which consolidated the performers as one entity, whilst allowing each to express their individuality. It can be so easy to be dwarfed by such a relatively expansive  space without the benefit of lighting to direct your gaze. That the costuming managed to set the performers apart from the landscape while still appearing like they belong in it is no mean feat.

Last night both PRELUDE and ENCOUNTER  kicked off at Prince Alfred Square. If you manage to make it tonight or Sunday evening you will also be treated to a performance by the Feisty Femmes choreographed by Diane Busuttil. I am so sad I missed them this time around, but I am sure they will become a long time Western Sydney fixture.