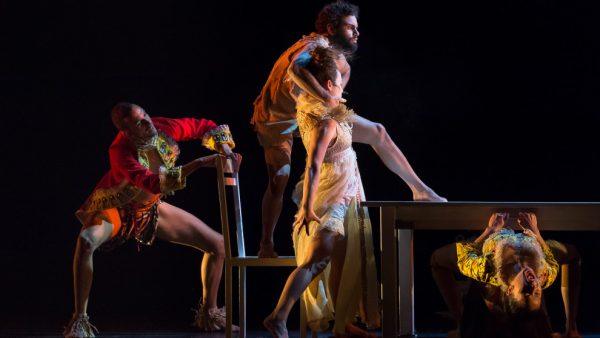 Home | Blog | Does anyone really call themselves a choreographer anymore?

Does anyone really call themselves a choreographer anymore?

“Does anyone really call themselves a choreographer anymore?”

This question pulled me out of a momentary reverie. It was posed as a statement from a panelist at First Draft Gallery. Feminist writer/performer Kelli Jean Drinkwater, dancer/ choreographers Lizzie Thomson and Angela Goh, and Anna McMahon as the 2016 directorial curator from First Draft, collectively mused on dance and the gallery space.

Them’s fighting words. I consider myself a choreographer first and foremost but I, like many, increasingly use my chosen art form as a gateway for exploring and incorporating a range of other arts practices.

Since attending the premiere of Bangarra Dance Theatre’s new triple bill titled OUR land people stories at the Opera House a few weeks ago, I have been preoccupied with the role of specificity within the arts. Who draws the line and where, when identifying the disciplines associated with the entity in question? Is the location or allocation of a primary arts practice or product really only a marketing ploy designed to aid in the advertisement for audiences?

Seeing Bangarra’s latest triple bill was the first time I truly thought the production values so stunning that they may have overpowered the actual choreography, or at the very least equalled the physical action on stage.

Visual artist Jacob Nash is a designer resident with Bangarra, as were the late David Page’s sound recording studios. This indicates that the music and set/environment is as vital as the choreographic component.

The first work, Jasmin Sheppard’s Macq, depicted the order by Governor Macquarie in 1816, to massacre a group of Aborigines in Appin, in order to assert land boundaries and colonial sovereignty. Sheppard’s choreography was anchored by two large set pieces: an oversized, elongated white table; which doubled as a luxurious dining assemblage, later to become an official workspace, and lastly a signifier of the demarcation of land, people/race, ideologies and power structures; and a black tiered platform, whereby Sheppard illustrated the countless killings through a poignant moving tableaux, consisting of repetitious sculptural cradling of limp bodies, lifeless limbs hanging briefly suspended over the low precipice, before inevitably sinking to the ground below.

The set pieces were architectural, aiding in this demarcation of the space. When the table was moved, it floated into position as if hydraulically controlled. The seamless shifting of the table was perhaps one of the more sophisticated manoeuvres; watching the transformation of the object without really noticing the mechanics in minutiae.

The second work, Miyagan, jointly choreographed by Beau Dean Riley Smith and Daniel Riley, was the culmination of research into their shared Wiradjuri ancestry. In this work the pair sought to illustrate kinship from clan; including sub-class totemic or meat systems, familial and individual perspectives. Again, the production values acted as the compositional glue, providing both a cohesion and a subtle distinction of ideas. The sound of cockatoos laughing from within Paul Mac’s score immediately set the tone of the work, which was upbeat and energetic. But it was the dancing feathers that flew in from the rafters which were augmented at regular intervals, which dominated. The feathers were at once a consolidated symbol of the birds we heard, later becoming a possible tree in which to seek shelter and shade, and lastly, an all-encompassing image of cultural linkage, as the ties that bound the feathers cast in shadow on the floor became a visual representation of the  intricacy of the kinship system.

Third was artistic director Stephen Page’s choreographic contribution, titled Nyapanyapa,  which really encapsulated his inherent interdisciplinary vision. Nyapanyapa is the true life story of a young girl gored by a bull in her youth, narrated in English by a Yolngu woman while simultaneously told in Yolngu matha (language) by an aged Nyapanyapa herself.

The soft rolling language of the narration placed me by a camp fire, hearing the tale unfold as if it were an intimacy shared with only me, and the images ones I had conjured from my imagination, as the events transpired.

This set consisted of a series of progressively-layered, back-projected images, originally painted by Nyapanyapa. We were first treated to a backdrop of rarrking which appeared like a digital rendering of a landscape in space, consisting of a uniquely undulating series of fine crosshatched lines. The bir’yun or shimmer effect was emphasised by the gradual widening and narrowing of intervals between each finely drawn line, accompanied by softer curves encouraging the eye to constantly travel in a more spontaneous, unplanned manner, as opposed to the straighter, sharper examples I am more accustomed to, which encourage the eye to become dazzled by a painting as a whole.

The painting was then layered with black figures depicting narrative. But it was the arresting image of the black figures, appearing as small children come to three-dimensional life on stage as larger than lifesize children, which provided the standout moment of this work. The timing of this appearance proving to be one of, if not the choreographic highlight. The appearance of the figures almost rendered the actual human choreography redundant at this point. In fact I would have been more choreographically satisfied if the actual dancers had disappeared for this section.

Maybe as the company continues, this need to satisfy conventions of choreography whereby dancers are obligatory, will become less of an imperative and open the door for a different chapter moving forward. Stephen constantly identifies himself as an urban indigenous storyteller, calling Bangarra his clan. In Nyapanyapa he has definitely transformed the stage to a dancing ground by enacting all aspects of indigenous ceremony within this contemporary offering.

Rounding this blog off by utilising Bangarra as an example I think I have come to the conclusion that specificity as an artistic imperative is akin to a fashion statement, which comes and goes in waves, and right now we are riding a definite interdisciplinary tide. I could go into a colonialist rant about the rise of specificity used for world domination, but then we would forget about the actual act of art making and that would definitely be counterproductive.

P.S. Big ups to Stephen Page as the 2016 recipient of the JC Williamson award for outstanding contribution across genres in live performance!