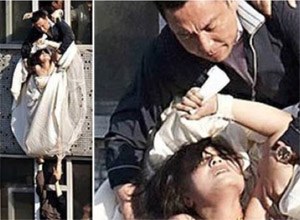 The Digital Media Project was initiated in 2009 by Western Sydney Dance Action (now FORM Dance Projects) and aimed to develop two separate collaborative and site-specific works between two local multi-media artists and choreographers. The 2009 funding facilitated a creative development period for the selected artists and choreographers to develop themes and ideas and investigate the hybrid nature and relationship of dance, multi-media and video artistry.

Chrissie Ianssen, Parramatta based visual artist with Kevin Privett,emerging choreographer, created (SUB)Urban Phrases – an investigation into suburban spaces and the public/private actions of people moving through them.

Marian Abboud, Parramatta based media artist, and Vicki Van Hout, established Indigenous choreographer, aimed to wrok with concepts of dys functional occurences and unexpected outcomes, different kinds of glitches at different “malfunctional” stages of life in their Behind the Zig Zag project. Various aspects of the performances and filming took place in public spaces in Parramatta including the Brandsmart Building.

In 2011 and 2012 these collaborative projects were further developed in creative development residencies at Connect Studios. This is a partnership between FORM Dance Projects, Parramatta Artist Studios and Ausdance (Dancewest residency), funded by an Arts Professional Projects Grant from Parramatta City Council in 2009 and 2010.

Electrical cords plugged into earth, a lone woman ranting jibberish, an internal argument between 4 selves. Behind the Zig-Zag is about logic and malfunction, about natural real-time versus the digitised virtual. It’s about rationalising the bizarre until it becomes a truth of sorts.

Marian Abboud and Vicki Van Hout have just finished a residency at Connect Studios and are still in the process of collaborating toward gathering material for a short film as part of the second stage development of the project Behind The Zig-Zag that originated as a 20 minute performance at Riverside Theatres in 2009. A small interactive component will be developed and exhibited in the near future…watch this space!

Public and private realms: what happens when intensely private realms are aired in public? Artist Chrissie Ianssen and choreographer Kevin Privett workshopped this idea, using the dramatic jilted bride image that was widely circulated on the Internet earlier this year.

This exploration is only a fragment of the collaborative process.

Conceptually the work excavated and mirrored the bodily behaviours framed by the built environment in Parramatta and its surrounds. The site Ianssen and Privett chose, the Glass and Steel Pavilion (formerly the old hospital) yields a rich accumulation of public and private use.

youMove Dancers in Behind the Zig Zag showing

Choreographer Vicki Van Hout worked with the artists in the studio to create movement sequences based on technological malfunction.  Through movement and text, van Hout initiated movement from a human premise, utilising various gestures and emotive body attitudes and postures.  These gestures were recontextualised utilising various technologies to create a series of glitch effects.  Integrating multimedia that included three data projects, three DVD players and two televisions placed on stage, the direction included visual and sounds recordings for the dancers to react and operate to live.  Abboud applied a sensitive environmental aesthetic to the project, by capturing the displaced elements to the natural environment such as birds sitting on the roof of the carpark, juxtaposing them with frenetic activity of cars, pollution, traffic and electricity.