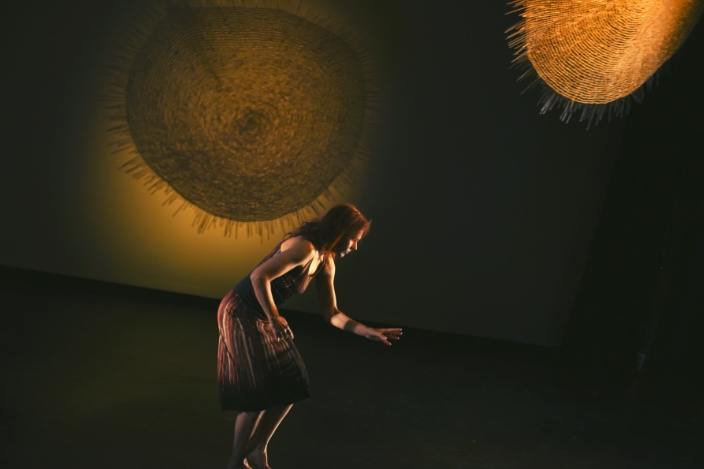 Hi guys. Am writing on the fly yet again. It’s 5.15 in the ay em and all I hear is the gentle hum of the fridge I could touch with my feet if I extend just a little (yes I am in another nondescript ‘cosy’ hotel room) and the soft swish of early morning commuters’ cars as they zoom down the street for business.

I am in Melbourne for the First Nations festival, Yirramboi – woo hoo! I share the bill with Joel Bray who is premiering a new interactive theatrical work titled Daddy in the North Melbourne town hall, that is Arts House. I am remounting a work, plenty serious TALK TALK which premiered in the Lennox Theatre at Riverside as part of FORM’s Dance Bites program last September.

As usual the stage fright has ramped up a notch. People are always amazed when I share this all consuming fact.  And no, at 51 it doesn’t get easier. As each day passes and I’m nearer opening night I feel myself metamorphose into my own version of Hyde. Or is that Dr Jeckyl? Who cares, I am riding that all-consuming rollercoaster of insecurity, have just slowly chugged up the top of the stupidly steep incline and am hurtling in what feels like that speedy descent into madness. I am giddy.

But what feels like my inevitable demise is not why I feel inspired to get up at the crack o’ dawn. It is because I am getting ready for the inevitable onslaught that goes hand in hand with performance and that is the press slash marketing junket. The barrage of interviews aimed at bringing bums on seats.

I received a taster last week as I was interviewed for a podcast titled Delving into Dance. I always come out of these things a little worse for wear, as I tend to over share and find myself spilling my guts like a Catholic penitent at a two a.m.confessional, waiting for the obligatory two Hail Marys to absolve my checquered past. As part of this process I promise to look whomever I am speaking to up and usually fail to follow through. This time I made an exception.

This Delving Into Dance podcast is a bloody little ripper! There are about 40 episodes to download and they are terrific. Here’s why: it feels like the interviews aren’t edited. The conversations aren’t neat. Instead the careers of the subjects unfold in cascades. No two interviews feel like they are adhering to any specific formula. This is refreshing because I realise this ‘early morning confessional’ syndrome is a common one.

I began bingeing with Dr Cheryl Stock and relished hearing about her thirst for dance classes which saw her taking workshops with the American dance pioneers, like Martha Graham and Merce Cunningham, when they were still alive and (high) kicking. Her page features an image of her moving amongst dangling ropes suspended from the rafters titled Hi- kyo (Adelaide Festival 1974) as in her podcast interview she regales us with a work which premiered in the seventies, involving interactive sound triggered by pressure  pads. (Or was that the late sixties? A perfect excuse to listen to her interview again.) I reflect on my foray into interactive technologies with Briwyant in 2010 and feel suddenly naive for assuming that I was making any kind of impact or innovation.

I then clicked on Shirley McKechnie and discovereda her interview along with Stock’s were part of a special series titled Ancestors and Anecdotes focusing on significant Australian female pioneers including Elizabeth Cameron Dalman, Carole Johnson and Margaret Lasica.

I gleaned that Shirley started dancing in the 1940s, that both her choreographic and teaching processes were improvisation based and that she founded dance scholarship as we know it in Australia by creating the first tertiary dance courses in Victoria. I was particularly buoyed by her decision to enter academia in her forties. This takes more than a little gumption and an impressive determination and many dance practitioners are subsequently reaping the benefits.

I then moved to Carole Johnson whose professional narrative is familiar to me as I am a graduate of NAISDA Dance College and have danced in both of the major indigenous dance companies Carole founded, Bangarra Dance Theatre and AIDT (the Aboriginal/ Islander Dance Theatre). I was put a little on edge.  Not on hearing that Carole played a significant role in the Aboriginal Tent Embassy which was erected on the lawns of what is now known as Old Parliament House on ‘Australia Day’ in 1972 as a protest for equality and land rights and is now Australia’s longest piece of durational performance art. No, I was made uneasy by the fact that Carole had a coughing fit and the powers that be left it in!

Now I am more than a little nervous as to what I have actually revealed and I have developed a kind of stupid amnesia as to the content my jabbering lips spewed forthwith to boot.

Lastly who should I click on but Joel Bray himself. Of course I also know Joel as I began teaching at NAISDA when Joel was a student. He stood out, not because of his wit, which was evident in his erudite exchanges, but because his passion and enthusiasm for dance was unbridled. Yes, even then. I vividly remember Joel’s singular posture striving to exist outside its mortal confines. Joel stood out amongst his peers because of his unashamed ambition (for want of a better term) which manifest itself in a physicality of extremes in comparison to his peers.

Of course Joel’s interview touches on his dance journey (I detest this word)  which like the other interviews are best heard in his own words. So click on the website because it’s always refreshing to hear legacies from the self-determined horse’s mouth so to speak.

Here’s a tid bit – Joel’s dad taught me Wiradjuri language. Sadly I don’t have anyone to speak it to but I have used this knowledge in the soundtracks of most of my works, if not this one.