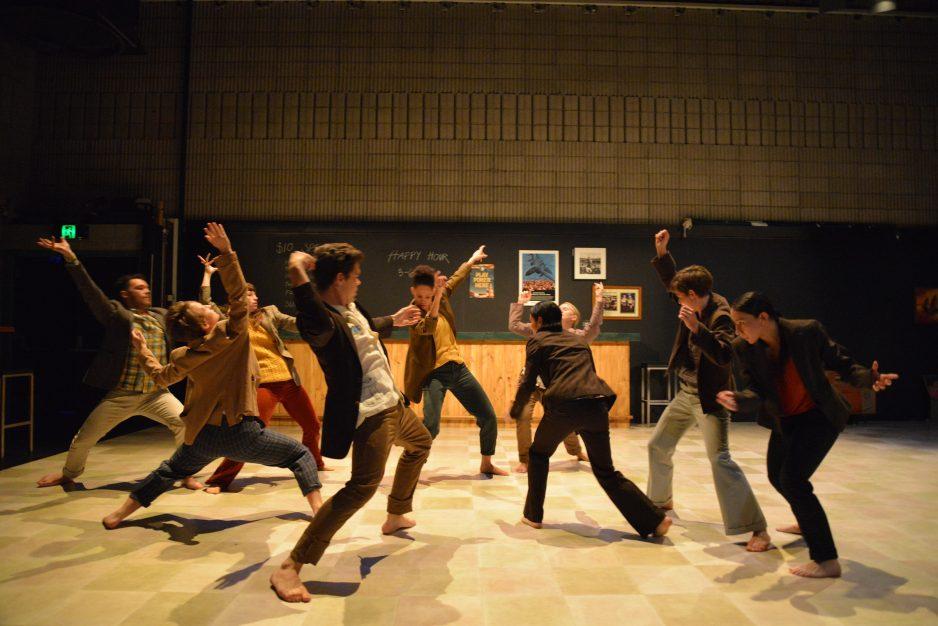 There is a time when a young person looks in the mirror and sees one or both of their parents staring back. They catch themselves in the middle of a familiar gesture or hear their parents’ voice roll of the tongue in the form of a familiar retort. I don’t know if this is always welcome at first because we like to think that we form our own identities and opinions.

Dance Makers Collective’s latest offering DADS  was a refreshing, uplifting homage to the performers’ fathers. The role of dance in their fathers’ lives was utilised as a vehicle to generate a dialogue, and the resulting interviews became an underlying part of the musical score, as well as a clever device to initiate deeper insight into their individual perspectives and relationships.

Miranda Wheen was the director choreographer. With the other dancers acting as performer collaborators, Wheen was able to conjure up the quintessential bloke in each of the vignettes. Each new choreographic voice revealing yet another facet of the male.

Wheen held us in thrall in the opening, as she entered on her back, holding a tapered schooner glass in one hand, whilst traversing the floor in a series of slow motion, undulating rolls to Only You by The Platters. This was an opening full of promise, as this simple choreographic device prompted us to see all that was on the set and simultaneously imagine the crowd around her, in the middle of happy hour at the pub, or an equivalent to what was famously known as the 6 o’clock swill. Donning a pair of bone coloured pressed slacks with simple shirt and jacket we tripped down a mythical memory lane.

Wheen was then joined by the rest of the cast whose costumes were a uniform of similar male attire. I was reminded of renowned English actor of the 20th Century, Laurence Olivier, who stated he created his characters from “the outside in”. Olivier’s was a method of accruing mannerisms aided by his accumulation of accoutrement, as was the collective’s.

The blokes of yesteryear (possibly the 60’s and 70’s) generally danced in couples. Dance was the equivalent of internet dating sites and presented an opportunity for couples to test their compatibility for the duration of a musical melody. I had seen a featured duet between Wheen and Matt Cornell previously, as part of a former event of short format, stand-alone works, and was pleased to envisage this exact context through this revisiting. I saw a relationship unfold, from the tentative initiation of new acquaintances to the daring exchange of the familiar, all played out in progressively virtuosic physicality.

The composition was tightly crafted as group formations traversed the stage, providing opportunities for solos to find their niche.

Some of the most memorable moments: sisters Marnie and Melanie Palomares’ playful hijinks; Sophia Ndaba’s lanky jocular cameos, which highlighted her gift for comedic timing; Carl Sciberras’ choreography to the track Horses, which reflected the contemporary dance language of the period depicted while simultaneously celebrating strength and joy through a slightly more playful, almost celebratory execution. But it was Anya Mckee’s chair solo for its silent scream which opened up the work, signalling a shift in the focus. The silent scream was an evocative reminder of the expectation of stoicism placed upon men. The following group sequence, which depicted the consequence of male social expectation, that of loneliness and possibly depression, was topical.

It is heartening to see dancers of this calibre band together, not waiting for an opening in one of the major companies for an opportunity to perform. It’s also refreshing to remember that dance can be unencumbered with angst and sometimes overly self-righteous motivation. The show-stopping ending with all dads on stage reminds us that to dance is to live.