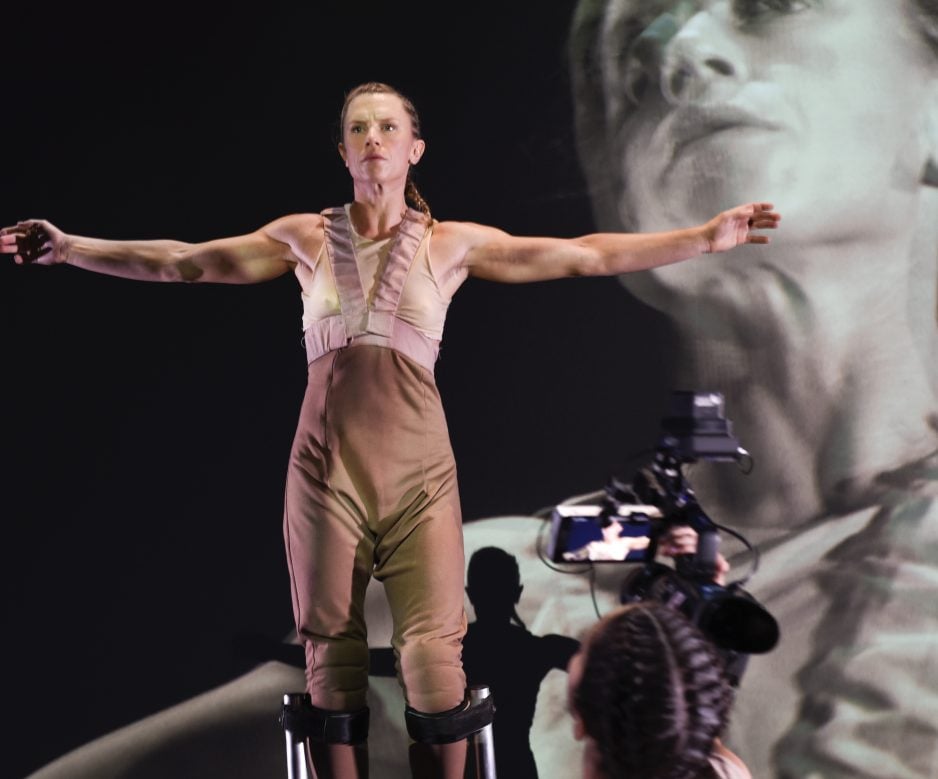 In this age of fake news and false advertising it’s refreshing to actually watch something that delivers what it promises.

On the smell of an oily rag Kathryn Puie and Lux Eterna created an interdisciplinary work in Soft Prosthetics and Metal Gods, melding dance and digital media, which delved into our increasingly interdependent relationship with machinery. In this instance, the augmented body.

Soft Prosthetics and Metal Gods opened in a spare landscape. Cameras on dollies, tipped tripods and long cylindrical metal stilts manufactured the topography. The moving bodies appeared simultaneously near and far as we were privy to an intimacy captured and looming large from multiple perspectives, on the cyclorama behind. A supine form would appear as if upright, leaning provocatively against a wall which was, in reality, the floor. In turn, the dancers’ digital gaze would pierce us with magnified dimensions their actual eyes could never reach.

This work was a celebration of subtlety. From Pamela Berbigier’s monochromatic costuming to Isobel Allan’s intricately braided hair design -orchestrated to place the performers within a timeless time frame. Perhaps as part of the virtual realm.

In an era of CGI spectaculars, featuring ubiquitously in all formats, I was heartened by this pared back production’s success in grappling with its theme. I was reminded anew how much we rely on technology in all its guises and how our dependence can be dismissed or overlooked. The work didn’t rely on up-to-the-minute computer programing in the manufacturing of its digital imagery, rather than despite it. The mechanical wielding of the cameras reinforced their position as characters on the stage, forming an anthropomorphic relationship with the other two performers.

I also feel that this work is not finished, in the sense that I felt in particular the kinaesthetic language being developed for this work deserves further exploration. I consider myself fortunate to have witnessed this particular iteration when the concept is fresh in the makers’ minds.

I especially loved the brief hybrid Iron Man moment, as I’d like to call it, where Lux Eterna placed the camera mount on her chest at the front of an integrated partnering sequence. This also reminded me of the dancing Shiva’s many hands, in this case assembled from the multiple cylindrical metallic legs.

The second choreography of the evening, Cat’s Cradle, was billed as a challenging work and it was. Not only for the physicality on display but predominantly for the content. Performers Angie Diaz and Macarena Brevi made this piece in collaboration with choreographer Josh Thomson, current artistic director with Legs On The Wall.

There is no doubt that this was a brave choice for Thomson: tackling the intricacies of female relationships, given the current social #MeToo climate. No matter how empathetic Thomson is as captain of this creative ship, this work would always be the result of an overarching male gaze.

Case in point would have to be the choice of costuming, which consisted of white, slightly patterned bras and underpants. Again, this choice could have been made to differentiate his costuming from the nude, almost utilitarian sports underwear Sydney Dance Company usually prefers. Their minimal costuming serves to distance the viewer slightly from the overt sexualised or sensualised material inherent in the intricate gymnastic repertoire, therefore opening a small window to allow for contextual interpretation. In comparison Thomson’s costuming choice didn’t supply much leeway for the beholder’s imagination.

I am very familiar with producing a work as the outside eye from the onset, having produced a work about the Long Grasser community in and around Darwin. The negotiation was very tricky, the budget was tight and I was not from that area. Similarly, I had to console myself with the outsider’s point of view despite a lengthy consultation process. I also had to contend with the backlash from those who believed that the story should only be authored by the community in question. Artists, dance artists in particular, are accountable like never before. White American Beth Dean’s 1950’s work Corroboree, which had her star as a male Aboriginal initiate, just could not happen today.

Despite this there were many striking moments. The opening, glimpsed in increments accompanied by lighting that intermittently flickered on and off to reveal a contorted body suspended from David Jackson’s large installation placed in the centre of the stage, promised excitement. The extended stop start masochistic play which had one dancer perched atop the other’s prone form, akin to a vulture claiming its prey, resuming only after assurances delivered under ambiguous duress, matched the promising start in both physicality and thematic tension.

The lighting and sound combined alluded to a show designed for a much larger scale and I also foresee this production finding another life in another context. It reminded me of an earlier work of Thomson’s I saw at the Conservatorium of Music as part of a YouMove initiative titled Dance Meets Music. This was imbued with a similar filmic quality. That particular work was reminiscent of an Alfred Hitchcock psychological thriller. Cat’s Cradle shows similar potential.