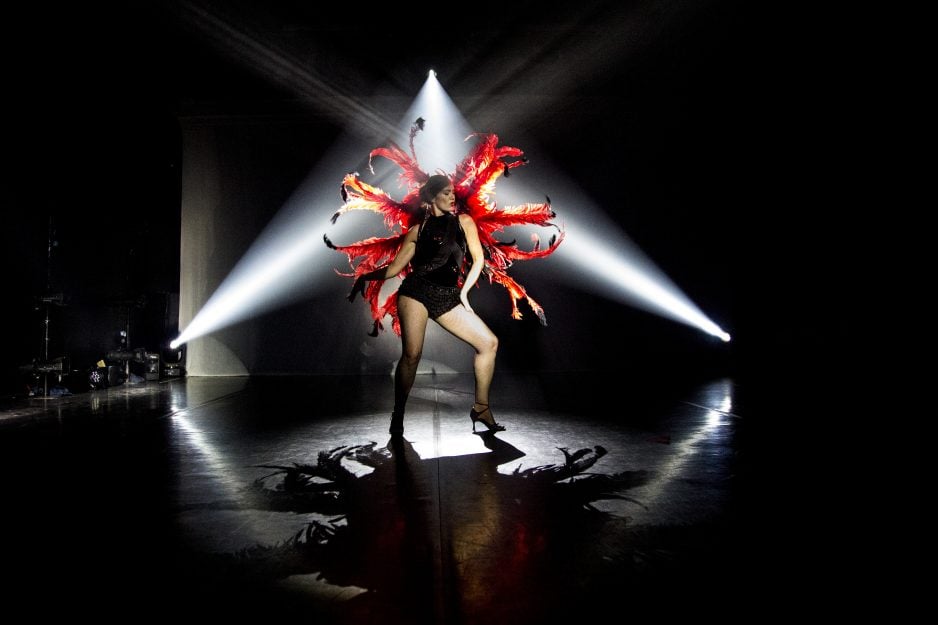 It’s been about a month since I last posted because I have been up to my elbows in drama, both of the personal and professional kind. I have been remounting the play Stolen by Jane Harrison, presented by NToP, for a regional NSW tour kicking off at Riverside during reconciliation week.

But enough about me and more about dance.

Feeling like I’d neglected my dance duties for a brief foray into the world of spoken words I went on a dance bender and binged on three very different shows, Sydney Dance Company’s ab [intra], Thomas E S Kelly’s SNAP*CLICK*SHOT* and Liz Lea’s Red. These productions were so different from one another I feel like I have over-indulged in a mixed bag of lollies.

First up, choreographer Raphael Bonachela’s much anticipated ab [intra]. I had seen the fabulous promotional shot by photographer Pedro Greig, featuring an exquisitely pointed foot on the end of a grande battement, taken from above, in the studio foyer each time I checked in for class. That photo promised something exciting was finally afoot (pun intended) within the rehearsal studios of our most conservative of contemporary dance companies.

Why, with such amazing physicality on display, did I feel just a tad disappointed? How could I possibly feel disappointed after seeing what seemed like an endless parade of busy bodies, busy performing intricately entwined duos and virtuosic solos and equally frenetic ensemble phrases? Maybe because the image piqued a curiosity within me, a promise of something unexpected while the actual show provided me with the all too familiar. Bonachela’s strength is his ability to compose material for the express purpose of dazzling audiences and in this case, he did not disappoint, from the opening duet with Janessa Duffy and Izzac Carroll to the extended solo performed by Petros Treklis.

The opening scene promised a psychological element that the photo suggested. The stage was lit with a series of black bands, cutting it into long horizontal compartments. From above there was an industrial feel, as scaffolding was exposed (and subsequently covered) and composer Nick Wales’ sound mimicked this repetition through a series of haunting bass notes, before the sound too became a cacophony of busy-ness.

From Bonachela to Thomas Kelly. This is a leap in that Bonachela’s ab [intra] was imbued with slick production values while Kelly’s CLICK*SNAP*SHOT* was a bare bones modest affair with minimal lighting states and one set aspect consisting of two concentric ochre circles. Although, strangely, Kelly and Bonachela exhibited much in common in these choreographic instances. Kelly, like Bonachela, is growing his own movement aesthetic, which in this case was equally busy. Both Bonachela and Kelly have incorporated a sizeable component of stylized gestural vocabulary, both choreographers choosing to incorporate eurhythmic body slaps as punctuation points within their works. I know from Thomas’ training at NAISDA Dance College that the origins for his preference may be attributed to the Torres Strait Islander dances which are often accompanied by complex slapped rhythmic structures.

Where Bonachela’s signature comes from his extensive partnering, Kelly’s movement idiosyncrasy is bound by his sudden dynamic shifts from fast to slow, creating an unexpected edginess.  CLICK*SNAP*SHOT* was premiered as part of the outdoor celebrations at the recent Gold Coast Commonwealth Games and was developed and adapted for a theatre venue.  I suspect that its strengths still lay as an outdoor performance, where the tone of the voiceover relaying a message of Australian Indigenous accessibility would be most effective.

Lastly, I was at last afforded the chance to watch Liz Lea’s Red at Parramatta Riverside. Why at last? Well, because I am invested. May as well ‘fess up now. I was one of the choreographers, along with Virginia Ferris, Martin del Amo and Brian Lucas, invited to contribute to Lea’s latest (almost) solo show. The show was featured as part of a greater festival titled DanscienCE Moving Well, directed by Lea and presented by FORM Dance Projects and Riverside Theatres.

This work is amazingly accessible considering its thematic driver – endometriosis. It was not only me who initially baulked at the idea that anyone would want to go and see a show about ‘womens problems’. I mean, how do you dress up a seemingly untouchable topic and make it palatable, let alone enjoyable to watch? Well I guess if it comes in Lea’s legs-for-days package with her modest self-effacing comedic wit, then something as unmentionable as endo is no longer off the table.

Liz’s work featured small cameos from the company she founded, The Golds, an acronym for growing old disgracefully. This work was not abstract by any stretch, yet it left room for mental meditation on the ageing body without being prompted by its title.

Melbourne may have the monopoly on the perception of cool in dance but I definitely think that my past week’s viewing of what’s on offer here is a testament to our diversity.