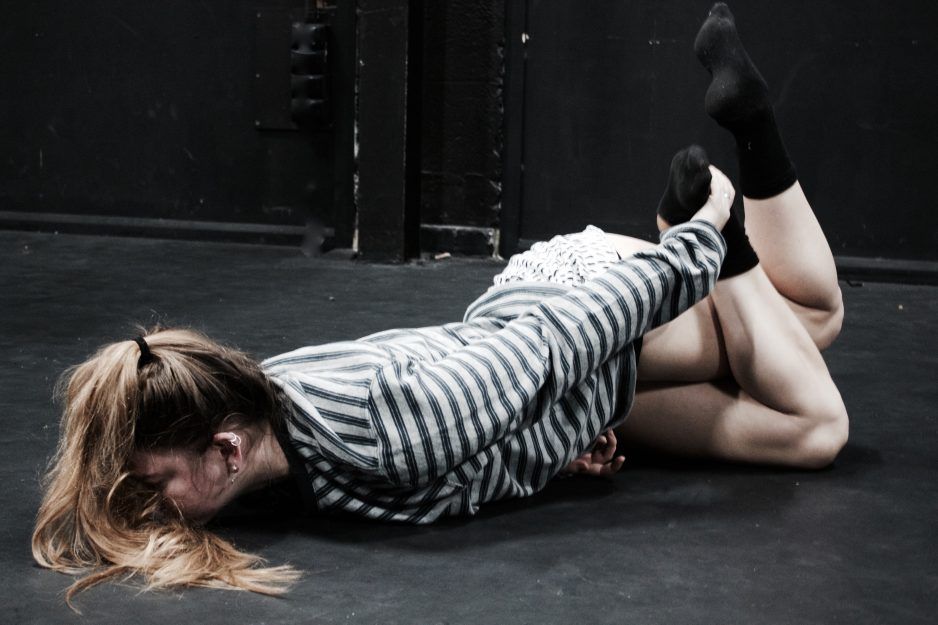 Where else but in a rehearsal room can you have a serious discussion about the inner psychology of being a machine- as if indeed you have become one?

In the rehearsal room you are led to the depths of your imagination. You make a pact with the person who has pioneered a pathway in their synapses, to be guided to an amorphous and fragile place. The dancer is the person who has the creative resources to meet in that uncertain environment, then places their body on that fertile path, to subsequently realise the world in which those realities flourish.

In my time I have channelled other hybrid beings, other genders, two locations simultaneously, summoned spirits and communicated with the dead. In any other context I would be considered nuts, delusional even. In the realm of dance, my body apprehends every farfetched scenario in ernest.

Last week I had the privilege of working in the rehearsal room with Cloé Fournier who received a Dirtyfeet Choreographic Residency for two weeks, at Shopfront Theatre in Carlton to develop a new work. Again I was not in the room everyday, but what I witnessed was a slow metamorphosis, beginning as the dancers entered the studio to conscientiously distance themselves from this world.

I remember having a serious discussion about where it is you see from. The task at hand, to establish the machinations of vision, the proximity and location of sight in order to appear like a mechanism. In one theory, the eyes viewed the world from the back of the head and in another, the eyes only had the capability of seeing certain fixed distances of close proximity. Lastly, other parts of the head were to function as eyes. Ears were eyes merely dressed as objects to hear.

Cloé is French. What can this mean in a mechanical world? This reconciliation of a gendered world is where the project derived much of its interest and a great deal of its complexity. It was in the designated gendering of all things, animate and inanimate within the French language, that Cloé created her separate world. This was revealed to me in her interaction with a female body acting as a machine, being treated like a bench. The bench was masculine. Cloé intimated that her interaction with the body was forthright because of the masculine gendered relationship she imposed upon it. This was part of a logic she developed to build a psychological element.

From her almost imperceptible stilted communications, consisting of jumbled conjugations which sounded harsh on uninitiated ears, to the economy of adjectives in the desire for expeditious results, I began to see the many ways in which her cultural heritage defined her automated microcosm- why her imagined world could never be replicated by me.

I can appreciate the negotiation across lived realities. This is a mandatory procedure within the indigenous art making process as we locate our community and the community/ies of our proposed works and consult with representatives from them. I am both envious and curious as to how Cloé’s work will finally manifest itself in light of her apparent freedom from cultural scrutiny, for she has derived some of her material from the folk dance forms. She has utilised aspects of her geographical origins as an instigator of new vocabularies. These new vocabularies have no overt cultural significance- yet.

This brings me to the conclusion of my ponderings around the crucial ingredient that is our imagination, spawned through my brief association with this work to date and which leads me to ask- What takes precedent in a work, its intent or the character of the person who instigated it? Do we know a creator through their work or is the spectator’s gaze just as imaginative? What are the criteria for diversity, the content of an artwork or the content of the maker’s cultural heritage?

This is why I am so fond of the in-between in-development stages, including the rehearsal process. This is where my understanding of the world is tested, not necessarily on the stage or as a final product, but most definitely as things are being worked out. Whether I am in it, or on the peripheries of a creation in process, I am fully present. Watch this space to see what will become from Cloé Fournier’s choreographic foray.