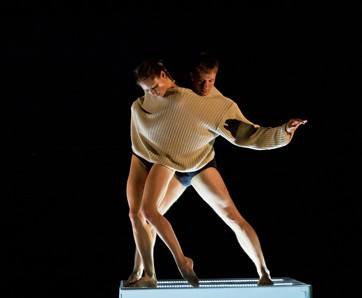 Side to One, Photo: Chris Herzfeld

Home | Blog | Side to One – Caroline Baum

Side to One – Caroline Baum

What a drama! Just hours before the premiere of Side to One, Craig Bary caught his foot on the lightbox that he and his partner Lisa Griffiths use as a platform. He needed eight stitches in his foot, but decided the show would go on.

We didn’t make any kind of pre-show announcement but I spent the entire performance trying to work out which foot it was, and wondering how he could get through the show, but that’s the miracle of a truly professional dancer and adrenalin for you.

The oversized op-shop sourced woolly jumper that Craig and Lisa danced in almost assumed a life of its own and became like a third  character  in their elegant exploration of partnering. Such a simple but effective and economical idea.