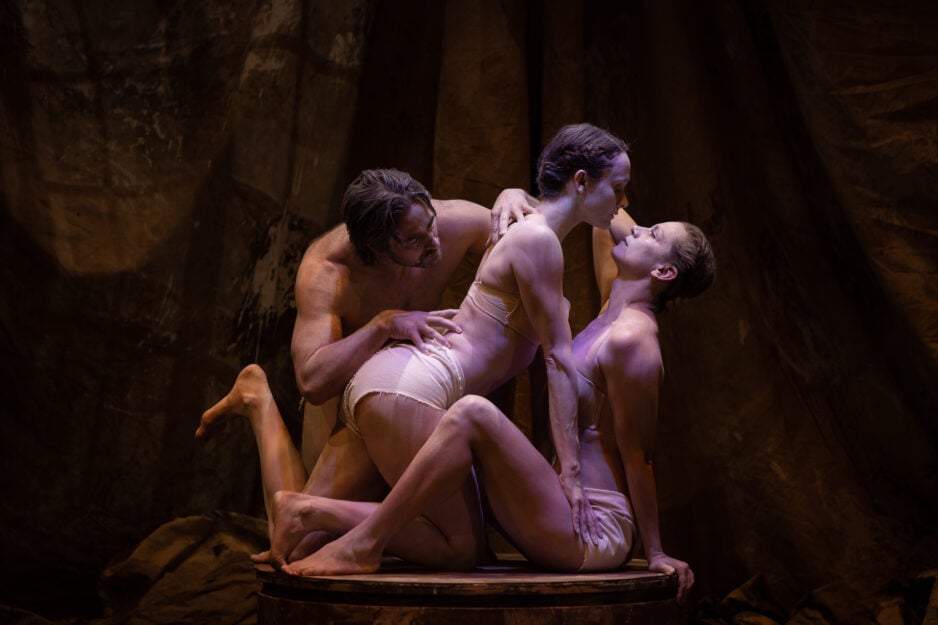 I have been meaning to write about Meryl Tankard’s work of late as I’ve seen three projects in a little over a month. Each of the works involved an overt interaction between visual arts and dance.

The first work, titled SKIN DEEP, was presented at the Cell Block Theatre in Darlinghurst as part of the Sydney Gay and Lesbian Mardi Gras and was a study on the illustrated body. Skin and ink.

In order to arrive at the performative destination, the audience first processed through photographer Waded’s predominantly larger than lifesize photographic essay of bodies, unfettered by fashion except for the pictographs permanently permeating the dermal layers of their selves. Some of those same bodies could be glimpsed in duplicate in real time, their poster-sized entities acting as frames, in turn occluding and revealing the action to come.

The magic in Tankard’s contribution lay in the fact that the bodies were an authentic reflection of life in the inner suburbs in that they represented an eclectic mix of performers, hailing from circus, drag, theatre and modelling, from a diverse range of ethnicities. There was something about the absence of guile in their execution that imbued the work with added poignancy.

The performers were individually placed upon raised platforms as exhibits. The pace of the work was initially slow and deliberate as if the subjects were initially lifeless and only made animate by our presence. This afforded us the opportunity at first to locate the tattoos, to then contemplate their individual pictorial choices, and to subsequently appreciate the individuality of the bodies which framed the artwork.

I was seated in front of model, performance artist and ballroom and house dancer Basjia Almaan, whose body was also adorned with long braids. I was at once jealous of her relative youth, evident in her blemish-free skin and the regal demeanour she exhibited through her execution of each minute movement shift. As the seating was in the round, my moving sculpture was framed by the other moving bodies and I was afforded the opportunity to discover each personality through the subtle differences of interpretation to the underlying assigned task work. The action was framed again by the other seated observers across from me.

Special mention has to go to the Singaporean Indian performer Shahmen, who featured in the background to my left. He was simply enchanting, imbued with an energy that leant an air of whimsy to the proceedings.

The subdued lighting and musical accompaniment from two operatic chanteuses and a pianist from The Song Room further elevated the work out of the pedestrian, as did the surprise performance by one of the living sculptures, The Amazing Ari, on circus tissue or silk apparatus. This had us appreciating the space anew by literally forcing us to peer towards the heavens. There’s nothing like an element of danger to force you out of comfortable complacency. And, to cap it all off, we were treated to a finale featuring Paul Capsis who sang John Lennon’s Imagine.

From SKIN DEEP to the play Claudel which ran in the Playhouse theatre of the Sydney Opera House. Directed by Wendy Beckett, Claudel was a biographical narrative based on the life of French sculptor Auguste Rodin’s muse Camille Claudel. Until recently Claudel had been relegated to relative obscurity. Although in the past decade she has re-emerged from the shadow of her former lover and mentor to be recognised as a talented sculptor in her own right.

As choreographer on this work I assumed for Tankard it would have felt a little like an extension, a part two of sorts of SKIN DEEP. Tankard’s engagement with the moving body represented an inverse manipulation of the inanimate in the pursuit of animation performed by the sculptor.

In contrast to SKIN DEEP the sculpted forms were played by three experienced contemporary dancers. The contrast in execution lay in the precision of their replication of Rodin’s works. This precision was marked by the dancers’ abilities to manufacture the right amount of effort in order to replicate the muscle definition of Rodin’s original masterpieces and to maintain those shapes for lengthy periods so as not to upstage the actors. Although I found my eye constantly and consistently veering back toward the white painted trio of Kip Gamblin, who played the plaster likeness of Rodin, Cloé Fournier of Claudel and Dorothea Csutkai, who played Rodin’s wife Rose.

I am always intrigued by the exactitude of the body achieved by sculptors. I am certain they must know how to dance because the marbles do indeed look as if they could move amongst us at whim or will. I remember spending hours at the Musee d’Orsay in Paris, examining Rodin’s famed Gates of Hell amongst hundreds of other sculptures on offer. Yet it was only in Tankard’s depiction of them in this play that the audacity of those poses became truly evident. From tableau to tableau, the intimacy of interaction from the live trio made me fleetingly feel prudish. I found myself wondering how they got away with being so up and in ‘each other’s business’, so to speak.

Tankard’s contribution to the play was crucial in that her work supplied the visceral energy the play lacked but needed and deserved. A standout scene featured Fournier as the bodily extraction of Claudel’s aborted baby. Fournier graphically played both the emotive anguish and the physical trauma in an extended floorwork solo, which featured a back-bend bridge atop the knees of the actor playing Claudel’s, before sinking in between her legs, to eventually writhe away in death.

I will only briefly mention Tankard’s other project with FORM Dance Projects, as it was a showing in progress, which I hope to write about in more detail in the future. I witnessed this showing of MASKED which involved eight emerging and mid-career artists who were being mentored by Tankard through a shared artistic process. The resulting work in progress, performed at the Riverside Theatre, was the result of a facilitated residency in Bundanon augmented by further solo explorations.

The Bundanon residency involved reactive task-based provocations in relation to the works of Sidney Nolan and to site specific stimulus. I am always interested in the mentoring process as it can take so many guises. From brief interactions with several artists afterward I gleaned that Tankard’s methodology involves a lead-by-example strategy whereby Meryl demonstrates her generative artistic process and it becomes the responsibility of the recipient to capture the knowledge imparted for further possible mediation. This approach, while not often considered de rigueur in western contexts is actually preferred in an Australian Aboriginal context, whereby active enquiry is often considered vulgar and active, and deep listening, combined with individual reflection or processing, is paramount. Knowledge in an Aboriginal context is a rite of passage, not a right.

Despite the fact I was in Melbourne performing at Yirramboi (that’s possibly another blog) I was treated to access to a live streamed performance of Anton’s latest work NARCIFIXION over the weekend.

This was a two hander that only Anton, working in collaboration with Brianna Kell, could invoke and achieve. The work involved the same high-octane energy of delivery I had witnessed in a previous work titled Supermodern Dance of Distraction, presented by FORM as a part of Dance Bites 2012. Along with Blur, (previously created on Tasdance) this work examines the digital technological sphere to create a slick curated image reflecting a reality of the 21st century and beyond.

It is the juxtapositioning of short, sharp, fractured and isolated phrases indicative of action captured under a strobe light (yet absent of said strobe) in tandem with longer softer ‘organic’ shapes, creating the air of complexity indicative of the complex conditions we currently live in. One example can be found in the specificity of the touch interface vocabulary performed by the duo whilst on their stomachs in a reversed prone position. Only the fingers of their right hands, moving in precise unison, signalling in phone speak the age we are in. This is set against a humorous overlapping duet whereby the flat palm is positioned in relation to different body parts like a heat seeking missile, its sole mission to find body parts for gratuitous adulation. I imagine this would eventually be acknowledged through numerous hits involving the inclusion of thumbs up, cheeky, winking smiley faces and likes, alike to measure the highly sought after adulation.

The emergence of Anton’s voice, at first stuttering as if a garbled version of ones and zeros, before becoming whole discernible words, adds another texture to the work.

While watching the duo perform I was reminded of Cloé Fournier’s Mea Culpa which premiered two years ago also as part of FORM’s Dance Bites 2019. Fournier also utilised onomatopoeia to allude to technologically fractured states of existence. Both works included the integration of polymer based costuming elements. For Fournier it was the construction of the rubber band at the joints, to allude to the mechanised body, and oversized body bags, to allude to the manufacturing element. For Anton it was the geometry of the head gear and upper torso covering, which alluded to a sleek and slick aesthetic.

Fournier’s statement was unsettling, a foreboding tale of a dystopian future for humanity in relation to technological advance, a chaotic future that will inevitably invoke or provoke one, or several, uprisings. In contrast, Anton’s work hints at a world satisfied with itself, distracted and complacent. Dressed as a benign indictment on the contemporary experience, on second viewing it is equally frightening a prospect for the future of human kind.

I wonder what it would be to see both Anton and Fournier’s works on the same bill or within the same program.

Ahh one can dream. Until next time.