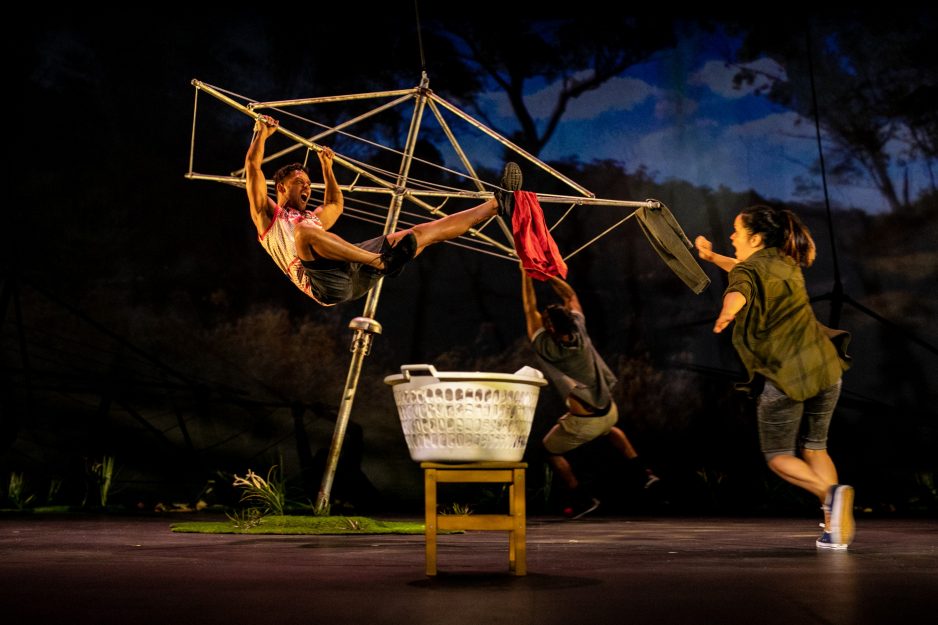 This blog straddles the interim between my foray to New York and the ensuing moving madness of March Dance which promises over 70 dance events. BRING IT ON!

Warning: you may need to read this blog in instalments if you find you are unable to digest it all in one sitting. In this instance you may have permission to check out and check back in at your leisure.

The Man with the Iron Neck

Company Legs On The Wall produced The Man With The Iron Neck, which played in the Drama Theatre of the Opera House, so expectation was fulfilled, as aerial components ensued aplenty. The set brought the heavens into the venue, allowing access to other times: the time before birth with two actor/ dancers (Kyle Shilling and Caleena Sansbury) floated in the air as if in an amniotic sack; a time straddling life and death as the pivotal character Bear (Kyle Shilling) literally teetered on the brink of his mortality from the highest branch of a tree (which successfully capitalised on the dimensions of the drama theatre to appear almost monolithic); and a time where life and death coexist as Shilling’s character slipped through the folds of a large well-worn couch to become a mother’s living memory, played by Ursula Yovich, who is also credited as writer for the production.

The set features a detachable Hills Hoist, which denotes a quintessentially Australian tale and from which the actors swing. Although it’s way more sturdy than the relic I have in my backyard, with missing rungs its construction reminds me of an adolescent smile badly in need of an orthodontist.

Samuel James’ video component was absolutely stunning. The entire length of the back wall served as a projection surface which took us inside the family home, transporting us to the dense scrub of the bush and revealing the height of that tree which had taken (at least) two lives.

This work has been a long time in the making, originally conceived by Josh Bond over ten years ago. I saw one of the first modest incarnations as Bond presented the tale of the circus performer who astounded the crowds by repeatedly swinging from a noose and surviving. I remember the effective simplicity of that Pact Theatre performance. Bond appeared as a lone figure up an A-frame ladder, describing to us the characteristics of the noose. He was lit by a single soft spot and I remember leaning in to hear, see and ultimately share in that impending intimate act.

This Sydney Festival performance version was the first incarnation I had seen in which the narrative had been used as a metaphor to articulate the parallel tragedy of a family and the ultimate resilience of a people.

I attended opening night so was treated to much pomp and circumstance framing the show. This included a formal introduction and welcome by Rhoda Roberts as Indigenous rep for the Opera House, followed by a welcome to country which involved standing in silence for a minute to reflect upon the many lives taken and subsequently impacted by Indigenous suicide, before the performance proper began. Afterwards, acknowledgements featured a particular speech which was delivered by an Ex-National Rugby League player, Joe Williams, who shared his personal history of suicide attempts. I couldn’t help but think that this was still part of the performance. My observation is not intended to belittle the gravity of the message nor of this man’s life, but to acknowledge that the performance of Indigeneity was not confined to the theatrical event. I couldn’t help but ponder if the extended performances of community occurring in the foyer were perhaps upstaging the actual show. They were simultaneously heartfelt and poignant and a calling to arms by pointing to the culprit that is imperial colonialism and its after-effects.

From performance to Critical Dialogues about how we might educate and effect change within the actual performative event. I am referring to Talking Dance: Hacking the Anthropocene, which began as an in-process workshop at Critical Path and culminated in a conference at the Museum of Applied Arts and Sciences. The focus, to unpack our effect on the planet and help determine the future through dance.

I won’t go into detail about the particular strategies devised except to remark that what was communicated was an almost universal sense of urgency. From this urgency two other things were inadvertently communicated: a) that human intervention was imperative if we are to halt or reverse our (human) impact on the planet, and b) (this is a little more complex but bear with me) that time is constantly moving.

Dancer, Ivey Wawn, and her partner, Riki Scanlan, made the observation that time could be seen as reflexive, like breathing. They suggested that our time on Earth now marks the epitome of human intervention, and that we should, or are, entering a time where our footprint recedes.

Dance academic Sarah Pini and her partner presented a short film which juxtaposed two images, one of a woman submerged in a large body of water, her hair and costuming billowing as her body moved in free form, like a jellyfish drifting with the under-current pitted against a sterile hospital environment scene. I was impressed with the film as it was one of the few actual embodied offerings. Its simplicity successfully prompted a meditation on the complexity of our pervasive technological present, not in absolute terms as good or evil.

Jodie McNeilly was most at ease with the academic format, producing a comprehensive paper which referenced a durational performance Breathing In/Breathing Out by Marina Abramović and Ulay from 1977/78. It featured two performers locking lips in a kiss repeated several times, each an increase in time with breath held until they literally couldn’t breathe. This represented a powerful metaphor for life’s fragility and interdependence as McNeilly is, “particularly interested in the exploration of a concept and its limit reached in a shared action through bodies“. The durational performative references were followed up by a small photographic essay featuring discarded chairs on street corners compiled by McNeilly in her effort to explain her complex attachment, including the anthropomorphising of inanimate objects.

This brings me to Henrietta Baird’s contribution, which actually topped the presentations. Henrietta is a long-time collaborator of mine who works at the Sydney Botanic Gardens so it was a no brainer that there would be a botanic reference. Henrietta brought samples of leaves, with complex patterns of cellular repetition on display under the microscope. I asked of her intent in hindsight. Her remark to me, “What if we could hear the plants’ point of view? If they could speak to us would we still treat them the same? We are listening now because we are in crisis. Plants are dying and we are paying for water.”

I couldn’t help but think that maybe the biggest hurdle, and the underlying issue, is the relationship between time and movement, symbolising progress. I was prompted to mentally propose what if we thought of time as something other than linear, as something to inhabit instead of somewhere to go or consume.

From contemplation of an almost inevitable dire ending to a refreshing affirmation of community. This is how I felt as I played a well-crafted game of follow-the-leader in Gideon Obarzanek’s One Infinity. The audience was placed on two sides of a central stage, with additional performers placed at the top of each seating bank for the masses to follow. This simple act not only ticked the interactive box but made us performing communities, our awareness heightened and our sense of responsibility and obligation heightened in tandem.

This is not the first time Gideon has employed a split stage. I have seen this same device in previous work Two Faced Bastard (2008) whereby audience members were given the opportunity to choose/change their seating midway through the performance.

Shaun Parker’s King came on the heels of Sydney Festival as one of the first of the Mardi Gras events. I love Mardi Gras as the whole city seems festive, not just the foyers patronised by the well- to-do. Instead the joy literally bursts out onto the streets, culminating in the march down Oxford Street.

Less about queer agenda and more about male social behaviour, this work is an audience-friendly spectacular with plenty of satisfying tricks and sequences. As to a fast food snack my dancer’s body was addicted, sitting on the edge of my seat, waiting for the next feat of physicality. They came thick and fast.

Watching so many (ten) males on stage, my mind began to think about the many contexts which only men frequent. The tuxedo-type suits worn for the first half reminded me of the male salons in their heydays of the 18th and 19th centuries. My mind then began to wander to Lloyd Newson’s Enter Achilles (1996),which was a potent dance work in film set in a pub, full of volatile machismo. Then again, I thought of Craig Bary’s In Difference (FORM Dance Projects 2017) which featured a fabulous trio of Bary with Timothy Ohl and Joshua Thomson in a sequence that exposed the homoerotic overtones at play within the ‘bromance’.

The stakes in Shaun Parker’s work, while not as blatantly evident, were played out in subtle male gesture, as when the male machismo was overpowered time and again by a singular embrace, or when the king’s recently deceased fool (consummately performed by Joel Fenton) was fondled in lament by his Regent.

A highlight for me was the rendering of the men into their apelike ancestors. Their partially disrobed bare chests made me appreciate their physical differences. It was as if I was able to imbue each with the beginnings of a distinct character by seeing more clearly how each body wrestled with the virtuosic choreography.

Of course, King was driven by that singular voice. Haunting and all pervading, renowned Bulgarian-born songwriter/vocalist Ivo Dimchev wasn’t merely musical accompaniment. He shared equal if not dominant billing.

One thing’s for sure, it’s never dull this time of year. Can there ever be too much dance?