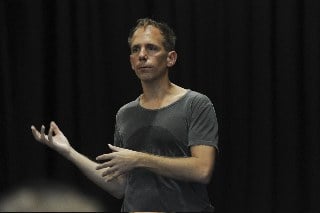 FORM Dance Projects would like to introduce Martin del Amo as our inaugural guest blogger.  Over the coming year Martin will be blogging for FORM about all things dance from his perspective as a choreographer.
Follow FORM twitter to follow Martin’s blog  https://twitter.com/#!/formdance

Martin del Amo, originally from Germany, is a Sydney-based dancer and choreographer. He is best known for his full-length solos, fusing idiosyncratic movement and intimate storytelling. These include It’s a Jungle Out There (2009), Never Been This Far Away From Home (2007) and Under Attack (2005), all of which received significant critical acclaim. In recent years, Martin has extended his practice to choreographing group works and solos for others including Anatomy of an Afternoon (2012 Sydney Festival), Mountains Never Meet (FORM Dance Projects and Riverside, 2011) and various solos for his ongoing multi-part choreographic project, Slow Dances For Fast Times, scheduled for presentation in 2013. Martin has been nominated for two Australian Dance Awards – Outstanding Achievement in Independent Dance (2010) and Best Male Dancer (2005). His work has toured nationally and internationally (UK, Japan, Brazil). He also writes and regularly contributes to RealTime magazine.