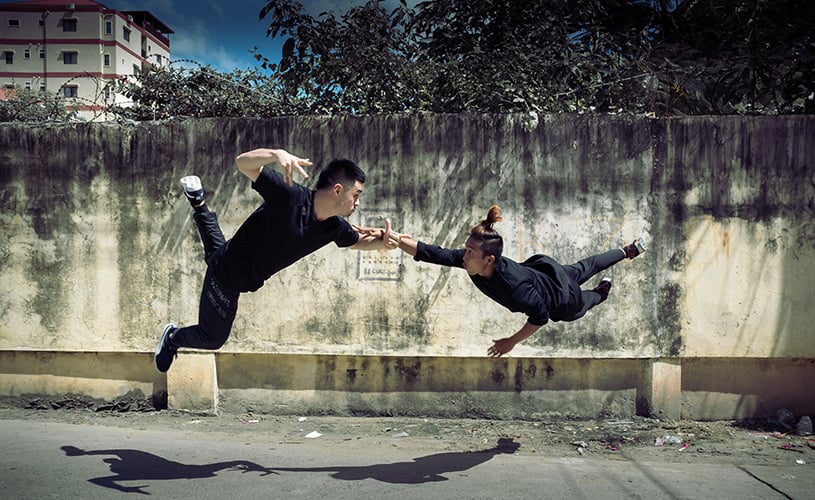 The lights were already dimmed as we filed into the Studio theatre at the Opera House. A big circle was marked and lit on the floor. There were no chairs. I was a bit bummed because I have a bad back and normally readily avail myself of any chance to lounge.

The usher barked orders in preparation, “Please spread out and let the shorter people stand in front”. The area was meant to accommodate an audience two imaginary rows deep. A friend beside me remarked that the orders were redundant because it was inevitable that we would be able to sort ourselves out. I am not so sure, but I appreciated the chance to check everyone out before the show proper commenced.

We were a diverse bunch comprised of the young and hip, the young and encumbered (with very young children in tow), professional dancing peers, professional producers and presenters, and the not so young but young enough at heart prepared (like me) to stand for a little under an hour.

From the beginning the pretence was combative as the two dancers Aaron Lim (Darwin) and Erak Mith (Cambodia) introduced themselves by entering the cipher circle from opposite points of the circumference. They appeared at the ready, facing off, marking their territory through initial exhibitions of physical prowess.

This opening was a standard demonstration of the b’boy dance battles I have witnessed on the street and on YouTube. With a call and response format each dancer tried to successively out-trick the other.

In the street format there is a lot of time dedicated to posturing before the actual dance because the tricks are so labour intensive they can’t be performed in long(er) duration. The alternating battles are also designed to give each performer a chance to recuperate. The fact that these two performers were on the floor for over forty minutes is impressive, given their explosive energy barely waned.

The first b’boy departure I recognised occurred when the dancers seemed to have exhausted themselves. The performance became much smaller and the lighting shrank to a small pool to accommodate the two dancers. They began twitching and rocking in close proximity to one another. Through a range of posturing, created by presenting their bodies as a series continually shifting facets, the dance became an intimate communication of camaraderie. It’s here in these microcosmic shifts that I began to reflect upon the program notes about Mith from Cambodia and his affiliation with the Tiny Toons youth program, designed to help impoverished kids. After the performance I spotted his tattoos, which span the knuckles of both hands, declaring him to be a ‘b’boy 4life’. When he spoke of b’boying it was clear it represents more than a way of moving, more a way of living and being, a way of connecting with positivity and opportunity.

Yet another dynamic shift occurred where I witnessed a comedic duo of yesteryear take shape. I fleetingly pictured Lam and Mith as Dean Martin and Jerry Lewis. Mith, as Lewis, the demonstrative funny man using his loping torso and dangling arms as the trickster to make us laugh. Lam as the Dean Martin straight man expressed through his grounded solidity.

In the foyer I told Mith that he had reminded me of a monkey dancer, Savann Yim from Cambodia. I had worked with Savann as part of a World Dance Alliance conference choreographic residency in Singapore and again through a commission by Nanette Hassall to choreograph on the BA dance students at WAAPA. Mith asked if I could recognise his reference to monkey dance and as soon as he affirmed his cultural inspiration I agreed that I could definitely see it.

What do I love about Nick Powers’ Between Tiny Cities? It is quietly but definitely turning contemporary dance on its head. What makes his work so impressive, so innovative, is that Powers has utilised the street form to unpack the abstract narratives and states of being normally reserved for the modernist and post modernist genres.

More often than not, as soon as an artist from a background other than the usual mainstream Eurocentric concert stage offerings is programmed within the contemporary genre I see the obligatory inclusion of one, some, or more of the markers that qualify as real dance appear in those works. These real or authentic dance signposts include (but are not exclusive to) high legs, the non-specific vacant stare and the pointed foot jump. Let us not forget the haughty, long neck, housed atop the floating, floppy body, unencumbered by strain or effort, moved to move through release-based momentum.

It is refreshing to see that Nick has not acquiesced. Yes, he is literally turning dance on its head as his dancers’ upper torsos and arms work to support the weight of the body, while the legs are free to articulate themselves in a myriad of gestures otherwise designated to the arms.

One of the finest examples of Powers’ strong grasp of the contemporary idiom could be found in the extended partnering section. Powers utilised the geometric gestural language of tutting to connect the two performers before progressing into more acrobatic inverted counterbalanced shapes. Somehow through this partnering section the work became more sombre.

The lights dimmed on the moving bodies, until we were left with just the sound of the performers’ exertion in breath and squeak of rubber sneakers on varnished wooden boards. Only then I did I fully appreciate I had just experienced a rare and sophisticated range of textures, aided by the dramaturgy of Lee Wilson of Branch Nebula. Oh, and special mention to the sound designer Jack Prest who had us all rockin’ along, so much so, I almost forgot my infernal aching back.