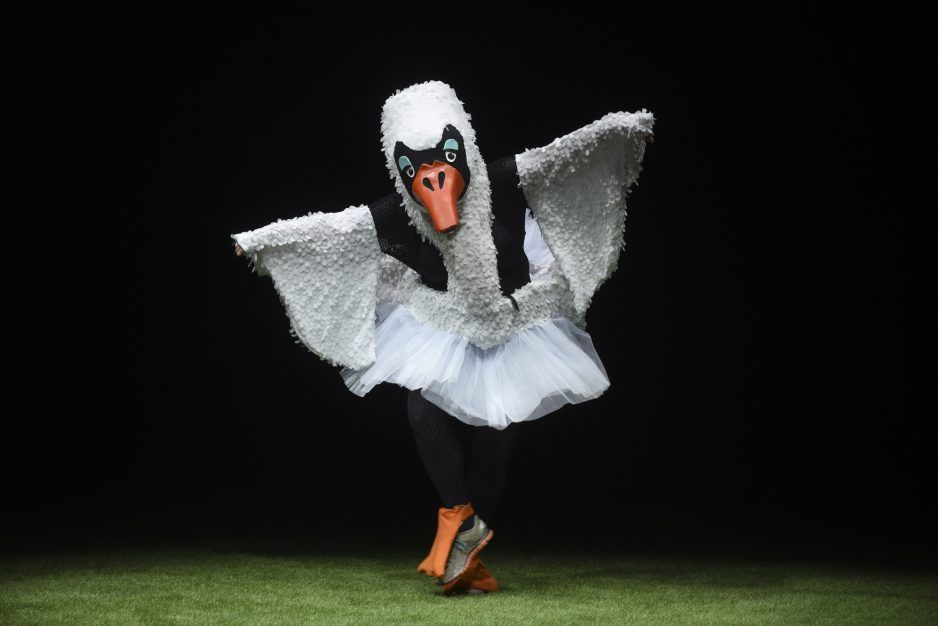 Another Sydney Festival done and dusted.

I walked through the big ballooned archway to the cries of, ‘Who are ya?!’, and thought for a minute that I’d caught the wrong flight from Newark airport and somehow landed somewhere in the UK.

Do we have the same war cries here? Or is this a universal footy chant? How do I find out? (I’ll let you know).

I had finally made it to the premiere of CHAMPIONS at Carriageworks’ big bay 17. We could’ve been at a game, the seating had the right sharp angled rake, perfect viewing for the sports enthusiast. Alas, I was in the theatre where everybody is a little too well behaved and a little too well heeled. I was excited, the anticipation was gnawing at my insides. If I were at an actual game, a piece of pungent and yet questionable meat, wrapped in a too soft doughy bun and slathered in cheap red sauce, would’ve more than tempted me as I took my seat.

There’s a big bird and I couldn’t make out if it was a magpie, or a make-believe biracial swan. It was white with black trimming, but with a relatively long neck. A goose perhaps? I am slow and not exactly up on my Australian ornithology. There could’ve been a joke in there somewhere, but I hadn’t figured it out yet. As mascots go, it was pretty agile and also well behaved, with a good pair o’ pins, but with more coordination and a bigger repertoire than most (mascots I’ve ever encountered). She was funny that bird (played by Julie-Anne Long) with a quiet sort of understated sense of the ridiculous.

She choofed off and a large band of screens lit up high overhead. Videoed pre-show banter between veteran rep Carlee Mellow and Channel Seven sports presenter Mel McLaughlin was featured as the performers took to the stage to ‘warm up’. The rhetoric was all modern day heroism commonly attached to this type of commentary, although the vocabulary was pure dance. I recognised the well trodden tropes associated with sports coverage, consisting of quick cuts framing the commentators from sharply foreshortened side angles.

The performers then took their places, standing centre stage in a tight huddle, for the event proper to begin. They symbolised potential energy, moving in fractions, ready to spring into action.

The show unfolded like a uniformly moving kaleidoscope, slowly revealing different facets of the game. It was considered and mathematically precise in its unveiling of each movement. A scene played in slow motion epitomised the careful close scrutiny in which choreographer Martin del Amo handled the game.

When I state that I was bursting with anticipation, I am not exaggerating, I have seen this work and its many incarnations, via showings in progress whereby I was placed literally on the sidelines, infectiously close to the action. At first I was concerned that the show might not fill the space, but Karen Norris’ epic block lighting combined with Samuel James’ visuals coupled with a booming sound track from Gail Priest and the remnants of haze which periodically spurt forth from the curious mascot’s backside (as part of the pre-game entertainment), did much to bring the ambience closer to the stands.

It was Sam James’ visual text representing player statistics, which elevated the work from mere mimicry by affording us the opportunity to comprehend the expertise on display. The simple insertion of a category listing bra cup size, followed by the number of failed arts funding applications, number of injuries and favoured body parts highlighted the uniformity between the arts and sports in relation to gender politics. This was briefly reinforced by a scene featuring the women as disgruntled cheerleaders.

For all the visual trappings I found myself asking why didn’t this work feel like a game. Well for starters, because it wasn’t. For all the tightly choreographed drills it didn’t seem like dance either. (Of course it most definitely was.)

It wasn’t until much later did I realise that the action was also a movement in deceleration. The pace peaked in the first half, with the half time break signified by a solo from the mascot (where the swan was revealed through savvy choreographic references to its classical ballet cousin), to return in what felt like a series of snapshots, changing only after the audience were afforded long deliberation with each tableau.

It was this treatment of time, this stretching of chronology, where I found myself most challenged as an appreciator of dance and which prompted me to reflect on CHAMPIONS as I sat in the audience for Dimitris Papaioannou’s Still Life performed in the same venue one week later.

Still Life was exactly what its title claimed it to be. This time I did read the cliff notes in the lead up to placing my questionable cultured bum on the retractable seat and watched my fair share of trailers to boot. One video montage sampled the history of Papaioannou’s works in a series of quick cut edits framing individual vignettes, emulating a virtual gallery of rich oil paintings. From this I was able to glean a visual feast of bodies inhabiting large scale immersive environments. Still Life was no exception. While sparse, the set was definitely its own expansive habitat.

It took a while for the audience to settle. All the while the choreographer sat on a chair downstage. As the lights finally dimmed Papaioannou grabbed the back of his chair from behind himself and abruptly hurled it offstage, but remained perched as if still on it.

This physical trickery summed up the visual crux of the work. The performers’ bodies were posited next to, in and as an organic extension of, the set. Men morphed from a concrete slab, legs appeared simultaneously forward and backward facing, male torsos disappeared as female selves emerged. Ladders became limbs. At once a female appeared as an apparition, her form blurred from behind the manual vibratory wobble of a body length plate of perspex, whose shimmer in turn created the effect of an aurora borealis in the reflection from a large piece of clear plastic suspended from above. The same piece of plastic that captured haze, falling from machines suspended from the ceiling, appeared as cloud formations, later, the constant tides from the sea and lastly the shimmer from the heat of the sun. The slowly morphing atmosphere resembled those of famed surrealist artists Salvador Dali (Invictus), Giorgio De Chirico
(Melancholy of Departure),  or nearly every work by Rene Magritte. Papaioannou offered up slow moving tableau after slowly unfolding tableau featuring metaphors for endurance and futility. Based on the myth of Sisyphus condemned to eternal life filled with the burden of pushing a large boulder uphill, only to have it roll down, and for the action to be repeated ad infinitum.

After about 40 minutes I spied the person sitting next to me checking the time. I saw the same brief flicker from phones repeated from different pockets in the seating bank. This was a comparatively long show for many, running at 80 minutes. It was as if we were to endure along with the performers.

I had once attempted to give the audience a sympathetic taste of slow-nothing-doing-time in a work created for Sydney Festival audiences titled Long Grass two years previously and I felt them palpably withdraw. In my attempt to recreate the inevitability of a future filled with time and no constructive way of filling it except with still acceptance, I lost a good chunk of my audience.

But is that a reason not to venture into other relationships to time and space with a seated captive audience? Or is the haste in which I saw patrons leave at the mere suggestion of an ending a symptom of a growing inevitability? An inevitability where our attention spans have to be satiated at smaller and smaller increments until we will be paying for the equivalent of an advertisement of the whole. Maybe some works should come with a disclaimer informing us that we will be given the opportunity to think, to meditate on what we are experiencing while we are in the act of experiencing it (the event).

Another Sydney Festival done and dusted.