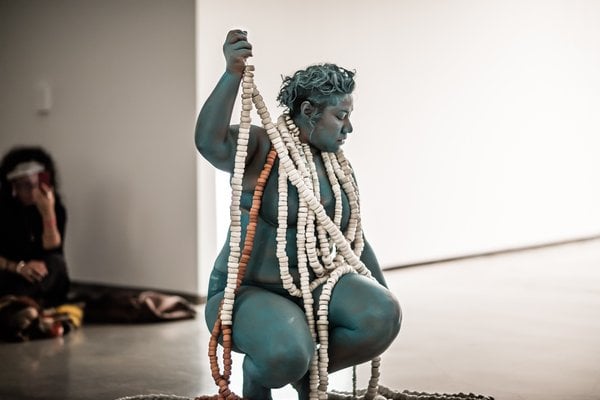 An Epilogue to NAIDOC Part Two

From Bangarra to the MCA ARTBAR. It seems almost surreal to place these events in the same sentence. But there you go, I have done it for part two of a special blog series celebrating NAIDOC week. Curated by Latai Taumeopeau Archipelago, This Is Not A Drill, is the first of the Artbar series I have attended and I am slightly embarrassed that my attendance was precipitated by my inclusion.

The differences between Bennelong and MCA ARTBAR are glaringly obvious, one is a stand-alone show and the other was a curated event. One was set predominately in the past, while the other was firmly housed in the (relative) here and now. Can they be compared to one another? I believe they can. Bennelong and Archipelago, This Is Not A Drill  ultimately represent a contemporary calling to arms by their mere presence in this city’s most prestigious Eurocentric spaces of entertainment.

Ultimately the difference between these two events lay in the delivery. The comment ‘I am Bennelong’ simultaneously celebrated a substantive continued presence of First Nations’ cultural practices and traditions while also inferring our capacity to live and thrive from within an empirical construct.

Latai Taumeopeau went one step further by utilizing Pacific Islander cultural customs in a series of performative provocations in praise of the might of the little voice within the dominance of global behaviours, including (rampant) consumerism and war.

Archipelago, This Is Not A Drill was imbued with sense of urgency. I cannot gauge how it was received from the perspective of the spectator. I do know that the evening was filled with chaotic action infiltrating the entire venue.

I spied a remounting of Latai’s work Repatriate originally aired as part of the 24 Frames Per Second (2015) exhibition at Carriageworks. In the footage Latai is enclosed in an oversized fishbowl type perspex tank, performing a dance whose rendition is evocative of a ‘traditional’ hula whilst donning several children’s flotation devices and being steadily submerged in a rising body of water. The predicament was simultaneously ridiculous and pathetic and I felt a certain future, filled with futility from a people I’ve never met, through her actions.

Then there was Deborah Kelly’s Tank Man Tango (2009). An homage to the lone brave resistor who dared to stare down the barrel of a line of oncoming tanks, armed with two shopping bags of groceries, in Tiananmen Square in China in 1989. Moved by the iconic image Deborah initiated a movement, facilitating an opportunity for a global response by participating in a dance which staged multiple satellite performances that were witnessed through simultaneous live streaming.

In hindsight my contribution seemed insignificant. I was invited by Latai to remount my short piece titled Thong Dance which was originally an excerpt of a full length work titled My Right Foot, Your Right Foot (2006). Thong Dance was inspired by the re-introduction of indigenous ‘welcome to country’ ceremonies as part of official western functions. At the time of making the work I felt I was heading into dangerous unchartered territory. Through this work I was questioning the validity of this growing practice, from within the community. I was debating whether it was a gimmick, or a manoeuvre by the state to appease long term civil injustice, or a truly meaningful act acknowledging the original inhabitants and their extensive knowledge as custodians responsible for the ongoing maintenance of the land.

There was also a drive or impulse to question physical parameters, in regards to gender, within the contemporary indigenous dance medium. I felt that women’s roles were relegated to the peripheries, as props for the more virtuosic language performed by the men. The women just simply weren’t as fierce as the men.

Of course I realise this is an attribute that is carried over from the ‘traditional’ dance context where the women’s role is entirely different to that of men. The physicalities in this context reflect the gender specific life responsibilities before the advent of colonization. Which for the men was to hunt and for the women to be gatherers, and supporters, nurturers and carers. For the men physical virtuosity is reflective of the need to be stealthy, to be ready for the kill and for the women their physicality is reflective of the repetitive durational and communal aspects of finding bush food, and painstakingly making bags, cloaks, digging sticks and carriers.

In Thong Dance the women stomped the ground and held themselves upright. Some of the steps were derivative of recognised traditional men’s locomotive patterns. The thongs provided a novelty factor, a distraction of sorts, from the potential controversy surrounding my initial choreographic intent, which was to craft a dance that reflected the shift of Aboriginal women’s roles in society to include breadwinners or primary providers within contemporary urban family structures, including sole parent families.

So when Latai asked me to remount my dance with the transgender predominately vogue-ing dance group from outer western Sydney I was taken aback. What did this mean? Would it still be a ‘welcome to country’ practice? In actuality it didn’t matter. The underlying intent was even more intriguing as the masculine vocabulary which was re-interpreted through the female body, was re-invented yet again through the complex ambiguity of my new Pacific Islander sista-girl cast. Through this MCA event Latai breathed new life into the work by opening the dialogue around the concept of gender assignment even wider to include the deserved visibility and inclusion of the LGBTQIA community. I am grateful to Latai Taumeopeau’s vision for my inclusion as part of the ambitious line-up for Archipelago, This Is Not A Drill  (for which I have left much of the comprehensive program out) and for the chance to collaborate with the beautiful duo Koko Carey and Jamaica Moana who delivered the highly nuanced foot stomps like they’d being beating the red desert dirt with the soles of their feet for years.