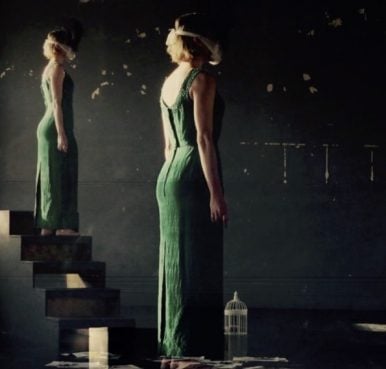 This Saturday past I braved the plummeting temperatures and ventured to PACT Theatre to take in Afterglow: Generations.  This was a double bill of solos featuring intergenerational artists who have each made a professional impact on the other.  This was an inaugural event format featuring seasoned performance maker Dean Walsh and not-so-newbie Cloé Fournier.

Cloé was up first with Humanoid. She explored an animal/ robotic/ human hybrid being, fleshing out its reality in a roving performance which required the audience to act as moveable participants, their/our bodies demarcating the size and proximity of the action.

From the beginning Fournier utilised a staircase as a precarious pedestal as she ascended via the first tier of the cylindrical metal railing. I moved midway to find a better vantage point and caught her full feline form in the awkward upward trajectory. She was dressed in a floor-length gown reminiscent of the metallic coloured plumage of a peacock. The heavy din that accompanied her initial travail was ominous, lending an air of gravitas to the sparse physicality of this scene.

There existed a consistency in Fournier’s performance, of thematic narrative featuring the femme fatale cognizant of her fate and the parameters in which she must thrive, and of a physicality, which consisted of a series of open scores, that responded to the site specific nooks and crannies Fournier fashioned for herself in the uniquely shaped venue.

Fournier is a solid mover and this specific offering represents a larger ongoing exploration which examines a unique combination of futurism and the female driven power structures. I feel like Humanoid was an exquisitely dressed appetiser while her next instalment will serve as a more satiating main course

Highlights of this performance include the costuming, which at times alluded to a rococo-esque ornamental quality. Fournier’s daring commitment was exhibited in her physicality.  The sharp sound manufactured by the friction of her soles underfoot, scratching the stairs and punctuating her descent; the avian broken angularity of her body as she emerged onto the stage space; her suspended form hanging open parachute-style close to the floor; and the strange feathered fledgling mewls which accentuated her vulnerable birdlike status. Fournier’s performance left spaces for both contemplation and further creative development.

From Fournier to Walsh’s Threshold:NRC. It is heartening to witness raison d’être triumph over soft muzak-type entertainment. When we re-entered the theatre space another obstacle course of sorts was set up. My eyes were immediately drawn to the far wall which was used as an oversized chalk board to document (numbered) physical processes, including motivational intent, prompting Walsh’s action. The right wall was later erased and replaced with the chemical constituents of both polyethylene and another ubiquitous man-manufactured ‘poly’, while the left side delved back in history, listing life before man.

Walsh himself emerged from a large yellow recycle bin, moving akin to a cephalopod roving over the sea bed, while attached to a piece of netting which resembled an umbilical cord.

I have had the pleasure of attending some of Dean’s dance classes when he was developing this language, which appears to keep unfolding as this undersea spineless form. It is hard work to appear so effortless. Believe me. I remember my stiff body aching from distorted exertion. The opposite intent of Walsh’s breath-based liquidity inherent in his sequential movement system I’m sure.

Walsh then proceeded to regale us with a family anecdote featuring his mother’s foray into Tupperware and his one-time demonstration of closing the lid to an auditorium-filled audience. From the recesses of my mind I remembered the famed Tupperware ‘burp’ and was still meditating on this titbit when Walsh started bringing on oversized bags full of plastic refuse with almost maniacal gaiety.

Everyday we are inundated with various calls to arms, so that we have developed a kind of charity fatigue. We know it’s happening. We know it’s dire, yet while I was watching the show I was drinking green tea in a bag from a paper cup. I know both the teabag and the cup were not fully recyclable, yet my selfish desire for a warm cuppa superseded my environmental responsibility. Shit!

I am still on the fence with that particular symbolic act but I do know that I was and am won over by the majesty his body assumes when he embodies the underwater populace.

What must not go unsaid or unnoticed is the effort exerted to bring this show to us without funding (but with support from PACT Theatre). I prefer experiencing bare bones ideas fleshed out on less than the smell of an oily rag. I am appreciative of these works because they are present. We need to grow bigger audiences who are willing to be present with the raw product as well as the slick productions. We need to see how quick wit conceptually engages more often.

This is art in the extreme immediate without the heavy hand of money and hindsight. Although it would be good to throw money at them too. For there is a fine line between independent good will and exploitation and I think oft times it is the independent artists who lose out in their passion to communicate to a readymade audience.

Something to think about.