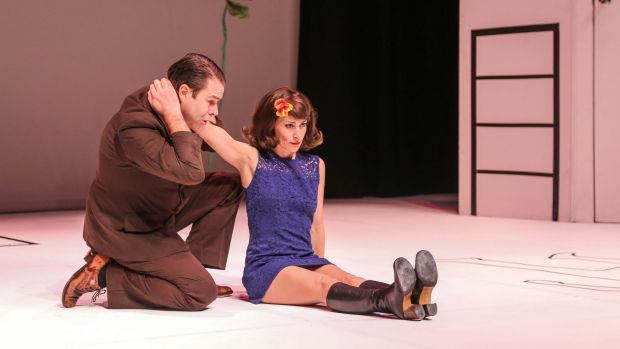 Why is it that second runs in contemporary dance remain so relatively rare? We bust our humps to make a work in some cases and it might see the light of day for a season that lasts barely four days. Surely this can’t be the new norm!

I had been meditating on the uber ephemeral nature of dance performance /product for a while before catching the last two shows which were indeed remounts. I am talking about Shaun Parker’s Blue Love and Australian Dance Theatre’s Be Yourself Redux choreographed by Garry Stewart.

I had seen Blue Love before. As I get older time seems to accelerate so I can’t remember whether my first experience of Blue Love was a part of the original run or if indeed it was a part of another earlier remount. This time watching the work was like being reacquainted with old friends from school, thinking I knew them. In reality my impression was merely a shell, a hollow vessel to capture impressions, for I had expected to settle in and enjoy the experience with no major surprises. Instead, watching the show was like looking at one of those fuzzy kaleidoscopic 3D cards I used to receive as a kid, comprised of multiple images appearing from different angles as if by magic.

How did I not remember the stuffed German Shepherd in permanent crouch framing the Flune’s abode (which seemed to be looking directly at me)?

Twelve years after the original run it is an interesting exercise to gauge the relevance of the fictitious couple who obviously got together before internet hook-ups were par for the coupling course. The dancers’ actual ages meant they were already depicting a (not so) fictional yesteryear which may have involved a collection of keys in a bowl at a party in the burbs to spice up marital doldrums. Although maybe this scenario would have been applicable to the performers’ actual parents’ generation (and similarly mine).

The Flune’s home videos, which peppered the show, were abstract enough in contrast to the hyperrealist action on stage to imbue the work with a relatively timeless appeal. Each recorded vignette was comprised of a surrealist combination of action. The outdoor bathing scene, doing laps whilst simultaneously dragging on cigarettes – appearing like a twisted mixed doubles synchronised swimming event, left an indelible mark on my memory this time around.

The movement language also consisted of a perfectly balanced choreographic mix of  pedestrian gestural vocabularies disguising highly virtuosic physicalities. This was epitomised in a scene where Mrs Flune, played by Lucia Mastrantone, appears limp while deftly manoeuvred around the stage by Parker in a scene depicting the demise of coupled bliss to a spoken rendition of cheesy one liners from 1980s pop songs.

Half way through the show I look around the seating bank and realise that the audience is generally older than the usual contemporary dance demographic I am used to mingling with. Again, it might be in the title. Blue love is not a term that is used by Gen Y, nor the predecessor Gen X for that matter. Being on the early end of Gen X again I know that the colour blue is associated with risky behaviour, hell I read author Kathy Lette’s surfer chick chronicles in the teen novel Puberty Blues and am conversant with her likeminded predilection for a clever double entendre.

From Blue Love to Be Yourself Redux. This is a long jump.

Sadly for me I didn’t see Be Yourself  the first time around, with its raked fabric set, and was left wondering why I was even the tiniest bit disappointed with the superb physical mastery on display. The dancers were phenomenal, each and every one.

Initial disappointment though, is usually followed by a more thorough interrogation as to why I was disappointed and it is in this process of reflection that I begin to unpack a work’s merits.

The title is loaded. What I saw on display predominantly represented the sciences, physics and biology. The show opened with narrator Cathy Adamek describing the complex machinations occurring within the body to complete the simple task of lifting a leg, consisting of the intricate chemical and structural internal interplay detailed in awe inspiring minutiae.

Be Yourself Redux may leave it up to my greater imagination to reflect on the ‘self’ housed within the complex machine we call human form but there is no doubt that the facility of that form has been explored to its zenith in this work. The cast, consisting of dancers Jana Castillo, Zoe Dunwoodie, Harrison Elliot, Thomas Fonua, Chris Mils, Matt Roffe, Felix Sampson & Kimball Wong, perform Garry Stewart’s singular vocabulary with deceptive ease. I know this because when Stewart’s Age of Unbeauty (2002) appeared on the scene there were bones making the collective rattling sound of multiple castanet players simultaneously playing out of sync to be heard within dance studios across the country forthwith from that day unto this. We all know how difficult and painful it is to stuff up the Sarah Jane (after namesake and one of Stewart’s founding company members Sarah Jane Howard).

What was bluster has developed into a finely honed mixture or hybridity, involving an interplay between the smallest gesture in isolation to powerful gross body moments in full flight, often captured on celluloid or in digital snapshots as evidence of uber human activity.

This work is also strangely enough a testament to how we as Australians wish to be perceived, as a fearless and confident nation. In Paris I was affectionately known as Bête Sauvage, the wild beast. I was proud of this moniker and I immediately thought about the Australian contemporary dance ‘self’ infiltrating companies internationally, of which Garry Stewart and co have no small part to play.

I remember a dancer once asking me when I was going to be finished with a work I was making on her group and I replied, ‘Never.’ A creative entity is a living thing which beckons attention and communication whenever it presents itself. I think about watching a rerun of a favourite TV show or movie, the Rocky Horror picture Show for instance, which has a cult following and famed interactive status formed by likeminded repeat offender audiences, which consolidates my belief that there is merit for more than those directly involved in a remount, for a remount.